Bhaiṣajyaguru, formally Bhaiṣajya-guru-vaiḍūrya-prabhā-rāja ("King of Medicine Master and Lapis Lazuli Light"), is the Buddha of healing and medicine in Mahāyāna Buddhism. Commonly referred to as the "Medicine Buddha", he is described as a doctor who cures dukkha (suffering) using the medicine of his teachings.

Bhaiṣajyaguru's original name and title was rāja (King), but Xuanzang translated it as Tathāgata (Buddha). Subsequent translations and commentaries followed Xuanzang in describing him as a Buddha. The image of Bhaiṣajyaguru is usually expressed with a canonical Buddha-like form holding a gallipot and, in some versions, possessing blue skin. Though also considered to be a guardian of the East, in most cases Akshobhya is given that role. As an exceptional case, the honzon of "Kōya-san Kongōbu-ji" was changed from Akshobhya to Bhaiṣajyaguru.[1]

Bhaiṣajyaguru is described in the eponymous Bhaiṣajya-guru-vaiḍūrya-prabhā-rāja Sūtra, commonly called the Medicine Buddha Sutra, as a bodhisattva who made 12 great vows. On achieving Buddhahood, he became the Buddha of the eastern pure land of Vaiḍūryanirbhāsa "Pure Lapis Lazuli".[2] There, he is attended to by two bodhisattvas symbolizing the light of the sun and the light of the moon respectively:[3]

A Sanskrit manuscript of the Bhaiṣajya-guru-vaiḍūrya-prabhā-rāja Sūtra was among the texts attesting to the popularity of Bhaiṣajyaguru in the ancient northwest Indian kingdom of Gandhāra.[4] The manuscripts in this find are dated before the 7th century, and are written in the upright Gupta script.[4]

The Chinese Buddhist monk Xuanzang visited a Mahāsāṃghika monastery at Bamiyan, Afghanistan, in the 7th century CE, and the site of this monastery has been rediscovered by archaeologists.[5] Birchbark manuscript fragments from several Mahāyāna sūtras have been discovered at the site, including the Bhaiṣajya-guru-vaidūrya-prabha-rāja Sūtra (MS 2385).[5]

In the Bhaiṣajya-guru-vaiḍūrya-prabhā-rāja Sūtra, the Medicine Buddha is described as having entered into a state of samadhi called "Eliminating All the Suffering and Afflictions of Sentient Beings." From this samadhi state he spoke the Medicine Buddha Dharani.[6]

The last line of the dharani is used as Bhaisajyaguru's short form mantra. There are several other mantras for the Medicine Buddha as well that are used in different schools of Vajrayana Buddhism.

Bhaiṣajyaguru is typically depicted seated, wearing the three robes of a Buddhist monk, holding a lapis-colored jar of medicine nectar in his left hand and the right hand resting on his right knee, holding the stem of the Aruna fruit or Myrobalan between thumb and forefinger. In the sutra, he is also described by his aura of lapis lazuli-colored light. In Chinese depictions, he is sometimes holding a pagoda, symbolising the ten thousand Buddhas of the three periods of time. He is also depicted standing on a Northern Wei stele from approximately 500 AD now housed in the Metropolitan Museum of Art, accompanied by his two attendants, Suryaprabha and Candraprabha. Within the halo are depicted the Seven Bhaiṣajyaguru Buddhas and seven apsaras.[7] 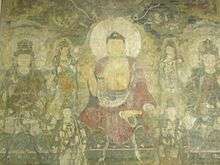 The Pure Land of Bhaisajyaguru, a wall mural made circa 1319 AD, Yuan dynasty

The practice of veneration of the Medicine Buddha is also popular in China, as he is depicted as one of the trinity of Buddhas, the others being the founder Śākyamuni and Amitabha. He can also be viewed as the healing attribution to Śākyamuni, as he is often called the "Medicine King" in sutras. There are two popular Chinese translations of this sutra: one by Xuanzang [8] and the other by Yijing both translated in the Tang dynasty. The Taisho Tripitaka and Qianlong Tripitaka (Chinese: 乾隆大藏經) each have three translations of the sutra:[9]

These three versions have different titles:[10] 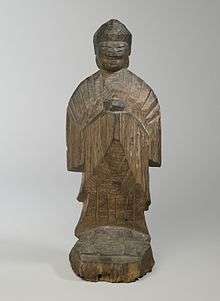 Starting in the 7th century in Japan, Yakushi was prayed to in the place of Ashuku (Akshobhya). Some of Yakushi's role has been taken over by Jizō (Ksitigarbha), but Yakushi is still invoked in the traditional memorial services for the dead.

Older temples, those mostly found in the Tendai and Shingon sects, especially those around Kyoto, Nara and the Kinki region often have Yakushi as the center of devotion, unlike later Buddhist sects which focus on Amitabha Buddha or Kannon Bodhisattva almost exclusively. Often, when Yakushi is the center of devotion in a Buddhist temple, he is flanked by the Twelve Heavenly Generals (十二神将, Jūni-shinshō), who were twelve yaksha generals who had been converted through hearing the Bhaiṣajyaguruvaiḍūryaprabhārāja Sūtra:[6]

Wherever this sutra circulates or wherever there are sentient beings who hold fast to the name of the Medicine Buddha [Yakushi Buddha] and respectfully make offerings to him, whether in villages, towns, kingdoms or in the wilderness, we [the Twelve Generals] will all protect them. We will release them from all suffering and calamities and see to it that all their wishes are fulfilled.

The practice of Medicine Buddha, the Supreme Healer (or Sangye Menla in Tibetan) is not only a very powerful method for healing and increasing healing powers both for oneself and others, but also for overcoming the inner sickness of attachment, hatred, and ignorance, thus to meditate on the Medicine Buddha can help decrease physical and mental illness and suffering.