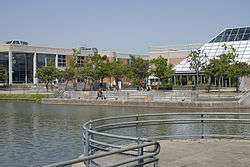 Aalborg University differentiates itself from the older and more traditional Danish universities with its focus on interdisciplinary, inter-faculty studies; an experimental curriculum based on an interdisciplinary basic course with subsequent specialisation; a pedagogical structure based on problem-centred, real-life projects of educational and research relevance – which internationally has become known and recognised as The Aalborg Model. With the problem-based, project-organised model, semesters at AAU are centred around complex real-life problems which students attempt to find answers to in a scientific manner while working together in groups.[7] In February 2007, the foundation of the UICEE Centre for Problem Based Learning (UCPBL) paid recognition to Aalborg University, which subsequently led to the appointment of AAU as UNESCO Chair in problem-based learning.

Aalborg University has five faculties with a number of departments, schools, centres and study boards. Since 1 January 2007, AAU has been divided into the following faculties;[9]

AAU conducts research within all faculties. Aalborg University is among the leading universities in the world within health technology research, wireless communication, energy, computer science, innovation economics and comparative welfare studies. AAU has established centres for telecommunication at Birla Institute of Technology in India, at Bandung Institute of Technology in Indonesia, and at the University of Rome. Furthermore, AAU has established a research centre for health technology at Xi'an Jiaotong University in China.

AAU has conducted several experiments in the field of CubeSat technology. The first AAU CubeSat was launched on 30 June 2003, the second (called AAUSAT-II) on 28 April 2008 and the third will be launched in Q1, 2013.[11] After launching AAUSAT3 the fourth will begin development.[12]

Although Aalborg University has had strong regional ties since its establishment in 1974, internationalisation is a cornerstone in AAU's strategy and development. Thereby, AAU is a local university with an international outlook. AAU focuses on international collaboration within research and has, among other things, established a department for wireless communication and satellite navigation at University of Rome Tor Vergata, and the University of Calcutta in India and two centres for telecommunications, one at Birla Institute of Technology in India and one at Bandung Institute of Technology in Indonesia.

25% of the University's researchers are non-Danish and 10 per cent of the student body of Aalborg University is made up of international students.

Cooperative agreements with other universities and colleges