The University of Stuttgart (German: Universität Stuttgart) is a university located in Stuttgart, Germany. It was founded in 1829 and is organized into 10 faculties.

It is one of the top nine leading technical universities in Germany (TU9) with highly ranked programs in civil, mechanical, industrial and electrical engineering. 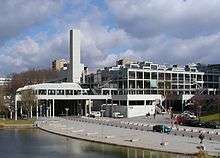 Mensa building at the main campus 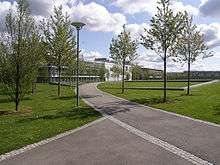 International Centrum at the University of Stuttgart 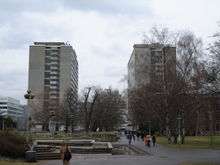 The new "Raumfahrtzentrum Baden-Württemberg" in Vaihingen

What is now the University of Stuttgart was founded in 1829, and celebrated its 175th anniversary in 2004. Because of the increasing importance of the technical sciences and instruction in these fields, from 1876 the university was known as the Technical College. In 1900 it was awarded the right to grant doctoral degrees in the technical disciplines. The development of the courses of study at the Technical College of Stuttgart led to its renaming in 1967 to the present-day "Universität Stuttgart". With this change of name came along a built-up of new fields, such as history of science and technology and the social sciences, and the extension of existing ones, such as history and art history.

Since the end of the 1950s, a part of the university has been located in the suburb of Stuttgart-Vaihingen. Most technical subjects (computer science, engineering, etc.) are located in Vaihingen, while the humanities, the social sciences, architecture, and similar topics are still located in the city center campus.

The university is divided into 10 faculties:[7]