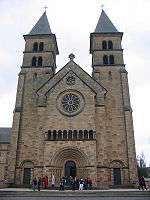 The facade of the Abbey of Echternach 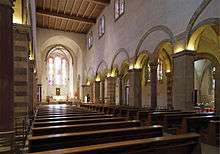 Inside the St Willibrord basilica

The Abbey of Echternach is a Benedictine monastery in the town of Echternach, in eastern Luxembourg. The Abbey was founded by St Willibrord, the patron saint of Luxembourg, in the 7th century. For three hundred years, it benefited from the patronage of a succession of rulers, and was the most powerful institution in Luxembourg.

The abbey is now a popular tourist attraction, and owes much of its modern fame to an annual dancing procession that is held every Whit Tuesday. Tens of thousands of tourists, day-trippers, pilgrims, and clergy visit Echternach to witness or participate in the traditional ceremony. 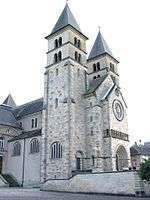 The modern basilica in Echternach.

Lying on the River Sauer, Echternach had been the site of a 1st-century Roman villa. By the 6th century, the estate at Echternach had passed into the hands of the see of Trier, which had constructed a small monastery on the estate. In 698, Irmina of Oeren granted the Northumbrian missionary Willibrord, Bishop of Utrecht, land at Echternach to build a larger monastery, appointing Willibrord as abbot. In part, the choice was due to Willibrord's reputation as a talented proselytiser (he is known as the Apostle to the Frisians), and, in part, due to the danger posed to his see of Utrecht by pagan Frisian raiders. Echternach would be the first Anglo-Saxon monastery in continental Europe.

Willibrord spent much time at Echternach, especially after the sacking of Utrecht in 716, and died there in 739. Willibrord was interred in the oratory, which soon became a place of pilgrimage, particularly after he was canonised. In 751, Pepin raised the Abbey of Echternach to status of 'royal abbey', and granted it immunity. Around the walls of the abbey, a town grew up that would soon become one of the largest and most prosperous in Luxembourg.

Beornrad, the third abbot of Echternach, was a great favourite of Charlemagne, and was promoted to Archbishop of Sens in 785. When Beornrad died, in 797, Charlemagne took direct control of the abbey for a year.

The work of the monks at the abbey was heavily influenced by Willibrord's roots in Northumbria and Ireland, where a great emphasis was put on codices, and Echternach developed one of the most important scriptoria in the Frankish Empire. The abbey at Echternach produced four gospels (in order of production): the Augsburg Gospels, Maaseyck Gospels, Trier Gospels, and the Freiburg Gospel Book Fragment.

Manuscripts produced at Echternach are known to have been in both insular and Roman half uncial script. As Echternach was so prolific, and enjoyed the patronage of, and aggrandisement by, Pepin the Short and Charlemagne, it played a crucial role in the development of the early Carolingian Renaissance. Seeing the work of the abbey at Echternach at taming the native German script, and eager to further the reform, Charlemagne sent for Alcuin, to establish a scriptorium at the court in Aachen. Alcuin synthesised the two styles into the standard Carolingian minuscule, which predominated for the next four centuries.

The early 9th century was the heyday of the abbey, as it enjoyed power, both spiritual and temporal. However, this was all guaranteed only by the Carolingians. When the authority of the centralised Frankish state collapsed during the civil wars under Louis the Pious, so too did the power of the abbey. In 847, the Benedictine monks were ejected and replaced by lay-abbots.

Return of the Benedictine monks 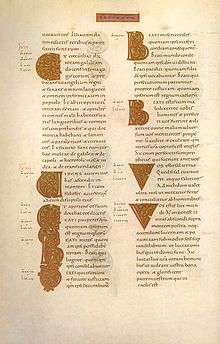 Text page from the Codex Aureus of Echternach

The fortunes of the abbey continued to vary with the fortunes of the Holy Roman Empire. When Otto the Great reunited the Empire, he sought to rejuvenate the intellectual and religious life of his dominions, including Echternach. In 971, he restored the Benedictines to Echternach with forty monks of that order from Trier. The abbey entered a second Golden Age, as it once again became one of northern Europe's most influential abbeys. The Codex Aureus of Echternach, an important surviving codex written entirely in gold ink was produced here in the 11th century.[1]

Around the middle of the 19th century, the quire began to crumble and it was feared that it might collapse completely. For this reasin, an association was founded in 1862 for the reconstruction of the church (the Kirchbauverein). The rebuilding in a neo-roman style was completed in 1868, and the abbey was re-consecrated.

In recognition of its importance as a national centre of pilgrimage to St. Willibrord, Pope Pius XII granted the abbey the status of minor basilica in 1939.

Part of the basilica was destroyed by shells in 1944, necessitating another reconstruction - its sixth in 14 centuries - in the original Roman style. the facade is a nod to the basilica of Paray-le-Monial. The building was again re-consecrated in 1953, though the 8th century crypt has survived throughout with no major damage.

There have been six churches built on the site at Echternach:

Despite the long history of the abbey and the city, Echternach is best known today for its traditional dancing procession, held around the town of Echternach. It is held every Whit Tuesday in honour of Saint Willibrord,[2] and is the last such traditional dancing procession in Europe. The event draws to Echternach tens of thousands of visitors a year, be they pilgrims or tourists, who either participate or observe the quaint and distinctive procession.

On 9 February 2010 Otto Harrassowitz Verlag, Wiesbaden, published a two-volume catalogue of the manuscripts in the library on behalf of the Bibliothèque nationale de Luxembourg.[3]

Burials at the Abbey