Henry Abraham Mitchell (18 January 1887 – 11 June 1947) was an English professional golfer. Mitchell had eight top-10 finishes out of 17 appearances in the Open Championship, his best performance being fourth in 1920. He was runner-up in the 1912 Amateur Championship and won the 1924 Miami Open.

Mitchell was born in East Grinstead, Sussex on 18 January 1887.[1][2] He was the illegitimate son of Mary Mitchell. Mary married a Mark Seymour in 1890 and Abe was brought up by his grandparents, George and Sophia Mitchell. Mark and Mary had a son Mark, Abe's half-brother, who also became a successful professional golfer.[3] Mitchell was a fine amateur, and played for England against the Scots in 1910 and won. He won the Golf Illustrated Gold Vase twice in 1910 and 1913, and played in two Open Championships before turning professional in 1913, attached to Sonning Golf Club in Berkshire.[2]

Mitchell won many golf tournaments in Great Britain[2] and toured the United States frequently,[2] winning the 1924 Miami Open, and entered three U.S. Opens. He led at the halfway stage in the 1920 Open Championship before collapsing in the third round, when he shot 84 and finished four shots behind winner George Duncan, who had been 13 shots off the lead after two rounds. In a match held on 26 July 1921, Mitchell and George Duncan were paired in a foursomes match and won against Chick Evans and Charles Mayo at Edgewater Golf Club in Chicago, Illinois where Mayo was serving as the head professional.[4]

Mitchell had eight top-10 finishes out of 17 appearances in the Open Championship. In the 1920 Open Championship he had rounds of 74-73-84-76=307 and finished in fourth place. He was leading the tournament on 147 after the first 2 rounds of play, but a third round 84 knocked him out of contention.

He was runner-up in the 1912 Amateur Championship, losing to John Ball on the second extra hole.[1][2]

Mitchell was supposed to be the player-captain of Great Britain's first Ryder Cup team in 1927, but was unable to make the voyage to the United States due to appendicitis.[5] He did play on the next three teams in 1929, 1931, and 1933. Mitchell was Samuel Ryder's personal golf instructor from 1925 at Verulam Golf Club, St Albans.[1][5]

Mitchell had the lowest round at the 1933 Open Championship at St Andrews, carding a fine 68, and won the Tooting Bec Cup.

Mitchell died suddenly in St Albans, England at age 60.[1][2] Mitchell was honoured by his peers when elected PGA Captain 1933–34. 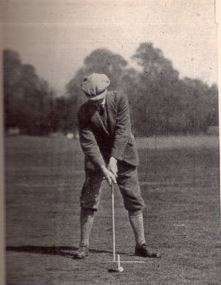