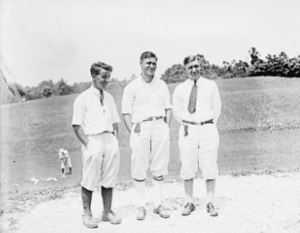 Leo Harvey Diegel (April 20, 1899 – May 5, 1951) was an American professional golfer of the 1920s and early 1930s. He captured consecutive PGA Championships, played on the first four Ryder Cup teams, and is a member of the World Golf Hall of Fame.[3]

Diegel was a runner-up in his first U.S. Open in 1920, one stroke behind champion Ted Ray. He won 30 PGA circuit events, and was a four-time winner of the Canadian Open (1924–25, 1928–29); a record for that event. In 1925, Diegel outperformed over 100 competitors to win the Florida Open (billed as the "Greatest Field Of Golfers Ever to Play in Florida") at the Temple Terrace Golf and Country Club.

Diegel was selected for the first four Ryder Cup teams in 1927, 1929, 1931, and 1933. His greatest season was 1928, with wins at the Canadian Open and the match play PGA Championship, where he stopped the four-year winning streak of Walter Hagen. Diegel defeated him in the quarterfinal to avenge earlier defeats in the 1925 quarterfinal and the 1926 final.[5] Diegel achieved the rare feat of defending both titles successfully in 1929, this time defeating Hagen in the semifinals of the PGA. Diegel was a runner-up to Bobby Jones at the British Open in 1930.

Diegel was an excellent ball-striker, but struggled with his putting after joining the tour. After extensive experimentation, he eventually developed an unusual putting style where he pointed both elbows outwards; this was referred to as 'Diegeling'. He was a tour winner from 1920 to 1934, but dropped out of regular contention when he reached his mid-30s; a playful wrestling incident in Australia in late 1934 with friend Harry Cooper caused nerve damage to his right shoulder and effectively ended his tour career.[6]

Diagnosed with throat and lung cancer in 1947, Diegel died at home in North Hollywood, California in 1951 at age 52;[1][7] he had taken a position there as a club professional after scaling back his Tour play. He was buried in Michigan at Mount Olivet Cemetery in Detroit.

Diegel was inducted into the World Golf Hall of Fame in 2003.

Note: The PGA Tour[8] and World Golf Hall of Fame[9] list Diegel with 30 wins. The PGA Tour book History of the PGA Tour lists only the 29 wins above.[10]

Note: The PGA Championship was match play until 1958

NYF = Tournament not yet founded DNP = Did not play DNQ = Did not qualify for match play portion CUT = missed the half-way cut R64, R32, R16, QF, SF = Round in which player lost in PGA Championship match play "T" indicates a tie for a place Green background for wins. Yellow background for top-10.