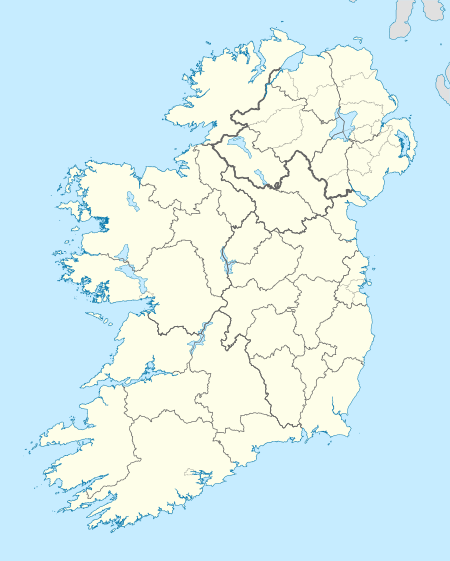 K Club
Locations of the venues on the island of Ireland

The Irish Open is a professional golf tournament on the European Tour. Beginning in 2015, the Irish Open is hosted by Rory McIlroy, and his charitable foundation is the main benefactor; the title sponsor is Dubai Duty Free.

The Irish Open was first played 89 years ago in 1927 and was played annually, except for the war years, until 1950. There was a tournament in 1953 but the event was then not played again until revived in 1975. It has been contested annually since then. From 1963 to 1974 Carroll's sponsored a tournament, generally called the Carroll's International and in 1975 they became the sponsor of the Irish Open which became known as the Carroll's Irish Open.

In 2014 and 2015 the Irish Open was one of the qualifying events for the Open Championship. The leading three players who had not already qualified and who finished in the top ten qualified.

The first Irish Open in 1927 was played at Portmarnock Golf Club from 16 to 18 August. There were 18 holes played on the first two days with the leading 60 players and ties playing a further 36 holes on the final day. In a stiff breeze local professional Willie Nolan led after the first day with a course record 72.[1] On the second day Nolan faded after an 81 and the lead was taken by Henry Cotton on 146 with Jack Smith a shot behind. The cut was 165 and exactly 60 players qualified, including 6 amateurs.[2] Conditions were very poor on the final day with the refreshment and press tents blown down and rain falling in torrents. Jack Smith had an excellent 77 in the morning and with Henry Cotton taking 86, Smith had an 8-shot lead over Cotton and Archie Compston. Smith, however, went to pieces and had a final round of 91 and was overtaken by Cotton, who took 81. George Duncan, starting the final round 14 shots behind, scored 74 and finished with a total of 312, beating Smith by 3 and Cotton by 1. Duncan's score of 74 was remarkable in that it was only two strokes over the new course record, on a day when his 74 and Smith's 77 in the morning were the only two rounds under 80 on the final day. Duncan took the Championship Gold Medal and the first prize of £150. Nolan was the leading Irishman, finishing fifth.[3]

In 1932 and 1933, the Irish Open was preceded by an international match between teams of English and Irish professionals. England won the first match 16–2 and the second match 13–3 with 2 halves.[4][5] The matches followed the same form as the England–Scotland Professional Match that had been played just before the Open Championship.

Since 2008 it has been the only European Tour event played in Ireland. The European Open was held at the K Club in Straffan for thirteen years from 1995 to 2007 while the 2007 Seve Trophy and the 2006 Ryder Cup were the last major team competitions played in Ireland.

Following the departure of Nissan as title sponsor in 2006, Adare Golf Club, part of the Adare Manor Hotel and Golf Resort in County Limerick, had planned to host the tournament for three years, from 2007 to 2009. After two years, it was announced in January 2009 that they could no longer sustain the losses incurred by hosting the event for a third year. In early March, the European Tour confirmed the national championship would return to County Louth Golf Club, Baltray, which had last hosted in 2004, with a new sponsor, 3 Mobile.[6]

Fáilte Ireland, the National Tourism Development Authority of the Republic of Ireland, agreed to sponsor in 2011, but with a reduced purse, cut in half to €1.5 million.[7] In 2015 the event was sponsored by Dubai Duty Free in conjunction with the Rory Foundation. On 12 October 2015, it was announced that Dubai Duty Free had extended their sponsorship to 2018 along with the Rory Foundation.[8]

(a) indicates an amateur golfer. In 2009 the winner's share was awarded to leading professional, Robert Rock.

(a) indicates an amateur golfer