Abortion in New Zealand is legal in cases where the pregnant woman faces a danger to her life, physical or mental health, or if there is a risk of the fetus being handicapped, in the event of the continuation of her pregnancy. In cases not protected by these grounds, aborting an unborn child is a crime in New Zealand under the Crimes Act 1961. Regulations in New Zealand require that abortions after 12 weeks gestation be performed in a "licensed institution", which is generally understood to be a hospital. Abortions must be approved by two doctors (referred to as "certifying consultants" within the legislation), one of whom must be a gynaecologist or obstetrician. Counselling is optional if the woman desires it, but is not mandatory under current abortion law. There is no statutory definition of fetuses or embryos as "unborn children" within New Zealand abortion law.

Abortion was criminalised in New Zealand by the UK Offences against the Person Act 1861, adopted in New Zealand in 1866. Laws enacted around this time acknowledged the danger to women of undergoing an illegal abortion. The 1893 Criminal Code Act made the punishments for illegal abortion a maximum of seven years imprisonment for the women and life for the doctor. Abortions were illegal until the late 1930s.[1]

The 1936 Committee of Enquiry headed by D.G. McMillan reported that one in five pregnancies in New Zealand resulted in an induced abortion. Some pregnant women died, were injured or infected, or abused by practitioners of illegal abortion. Historically, the death rate was high. Statistics of women who went to hospital after an abortion went wrong show that in 1934 at least 42 women died.[1]

In the 1930s Isabel Annie Aves was tried four times for "unlawfully using an instrument with intent to procure a miscarriage" without conviction.[2] From the 1940s activists such as Alice Bush advocated for access to doctor-provided abortions.[3]

Public debate increased following the legalisation of abortion in Britain in 1967 and in South Australia in 1969. The legalisation of abortion in Australia enabled New Zealand women who could afford to travel to have abortions in Australia. After the Royal Commission on Contraception, Sterilisation and Abortion, Parliament passed the Contraception, Sterilisation, and Abortion Act 1977.

Thereafter, Parliament served as an occasional venue for debates about the composition of the Abortion Supervisory Committee, when appointments and expiry dates for its membership have come and gone. Unlike the United States, abortion access has steadily expanded, and both pro-choice and pro-life groups have demobilised. While abortion has not been wholly decriminalised as ALRANZ (the Abortion Law Reform Association of New Zealand) wishes, abortion access is not limited.[4]

In the most recent (49th New Zealand Parliament, 2008–2011) New Zealand parliamentary vote on the composition of the Abortion Supervisory Committee (7 April 2011), anti-abortion Maori Party co-leader Tariana Turia moved that an anti-abortion Pacific Island doctor, Dr Ate Moala, be appointed to the ASC. The resultant vote was 70–30 against Ms Turia's motion, with twenty absences or abstentions. Altogether, twenty six National Party MPs and four Maori Party MPs voted for the addition of Dr Moala, while all Labour and ACT MPs and several National Party MPs as well as Independents Chris Carter and Hone Harawira, and United Future MP Peter Dunne voted against the motion, which was lost[5]

In 1999 the late Graeme White was found guilty and jailed for tunneling into an abortion clinic in a failed attempt to blow it up. White later drowned.[6]

Mifepristone/Mifegyne and introduction of medical abortion: 2003–

In April 2003 Justice Durie clarified parts of the Contraception, Sterilisation and Abortion Act 1977 relating to "performing" medical abortions so women who wish to have medical abortions must take medications in a licensed facility but don't need to remain there between taking the two sets of tablets which are taken 48 hours apart. Women also don't need to stay in the facility until the expulsion of the fetus completes the abortion

The Contraception, Sterilisation and Abortion Act 1977

The core legislation pertaining to abortion is the Contraception, Sterilisation, and Abortion Act 1977, and it enacted parallel specifications through amendment of the Guardianship Act 1968 (retained in the Care of Children Act 2004) and Section 187A of the Crimes Act 1961. These provisions enable women to undergo confidential medical consultation after they have seen two certifying consultant medical practitioners.[7]

Current New Zealand law allows for abortions to be performed for the following reasons, providing the abortion is approved by two certifying consultants and the pregnancy is less than 20 weeks old:

Other factors which may be considered, but are not in themselves grounds for abortion, are:

New Zealand has no parental notification restrictions on under-16s access for abortion, and a female can consent to (or refuse) an abortion at any age. In 2003, anti-abortionists attempted to introduce such restrictions into the Care of Children Act 2004, but their move was heavily defeated in New Zealand's Parliament.

By contrast, ALRANZ notes that successive abortion-related case law has preserved the status quo of partial decriminalisation and liberal terms of abortion access for most New Zealand women who need an abortion.[10]

In 2010 Labour MP Steve Chadwick proposed an Abortion Reform Bill to take abortion out of the Crimes Act. The anti-abortion organisation Voice for Life opposes the Bill, which ALRANZ supports.[11] After Chadwick was unable to return to Parliament after the New Zealand general election 2011, ALRANZ and its parliamentary supporters are trying to find a new sponsor for the proposed bill.

The Abortion Supervisory Committee collects statistics on the numbers of terminations performed each year, and for what reason under the terms of the Contraception, Sterilisation, and Abortion Act 1977. It reported that there was 18,511 abortions performed in New Zealand in 2003. According to 2003 figures by Statistics New Zealand, there were 21.0 abortions per 1000 women. This equates to roughly 247 per 1000 known pregnancies. Split amongst ethnicity in 2002 the highest rates were amongst Asian women (374), followed by Māori (245), Pacific Island women (243) and European women (209).

Since 2003 abortion clinics have been able to administer medical abortions. (Taking mifegyne/mifepristone to cause the embryo to dislodge from the uterine wall, and a prostaglandin supplement to expel the remains.)

The main pro-choice lobby group is Abortion Law Reform Association of New Zealand (ALRANZ), which favours the complete decriminalisation of abortion in New Zealand, but if that does not occur wants to have socio-economic reasons made a reason for obtaining a legal abortion.

The main pro-life lobby groups are Right to Life, Family Life International,[12] and Voice for Life, which favours reforming New Zealand abortion law to make it more restrictive. In recent years, it has lobbied for a "parental consent" law, which would require a girl under 16 years of age to obtain the consent of her parents before having an abortion. Voice for Life has also tried to lobby parliament to alter the composition of the Abortion Supervisory Committee in the hope of limiting the number of abortions performed on mental health grounds.

In 2004, Parliament debated legislation related to amendments to the Care of Children Act 2004, which would have required anyone under 16 years of age to notify their parents before having an abortion. No parental notification or consent laws are in place for women seeking abortions. National MP for Clevedon Judith Collins was the primary mover of this amendment, supported by the pro-life lobby group Voice for Life (formerly known as SPUC).

Collins was opposed by ALRANZ, the New Zealand Medical Association and New Zealand College of General Practitioners. A NZ Herald Digipoll showed that 71% of New Zealanders believed parents should be informed about whether or not their child was to have an abortion, with 60% believing this should be legally mandatory. This "parental notification" legislation was heavily defeated, as the New Zealand Medical Association and New Zealand College of General Practitioners objected that the abrogation of medical confidentiality would endanger pregnant incest survivors, and/or those within similar dysfunctional families and abusive parents. Another pro-life amendment was also defeated. It required the Abortion Supervisory Committee to collect statistics on how many abortions come from pregnancies caused by incest, and what happened to those young women after their abortion. Again, Parliament rejected this on the basis of abrogation of medical confidentiality for no evidence-based purpose. Voice for Life cited material from the US National Right to Life Committee and other US pro-life groups, while the Abortion Law Reform Association of New Zealand similarly used material from the National Abortion Rights Action League and other US pro-choice organisations.

During the recent 48th New Zealand Parliament, former Kiwi Party list MP Gordon Copeland had a private members bill, the Contraception, Sterilisation and Abortion (Informed Consent) Amendment Bill, drawn from the ballot. It was based on an Australian Capital Territory 'informed consent' piece of legislation, since repealed, and was defeated on a voice vote in Parliament.[13] Copeland has since been voted out of Parliament, as he did not secure a constituency seat at the New Zealand general election held in 2008 and his Kiwi Party polled well under the five percent threshold under the MMP framework in the Electoral Act 1993. The Kiwi Party has ceased to exist and Copeland is now a member of the Conservative Party of New Zealand, a social conservative party that is not represented in the New Zealand Parliament. It supports "parental notification" for adolescent abortions. 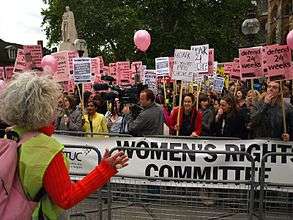 Right to Life New Zealand and court cases against the Abortion Supervisory Committee: 2005–2011 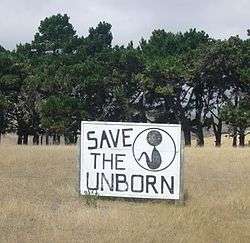 A roadside sign in the South Island advocating pro-life.

Right to Life launched a court case against the Abortion Supervisory Committee, accusing it of not sufficiently regulating abortion by allowing broad interpretation of the mental health exception. A High Court decision supported some of Right to Life New Zealand's points, finding that there was de facto abortion on demand. However, the Abortion Supervisory Committee appealed this to the New Zealand Court of Appeal.

On 1 June 2011 the Court of Appeal overturned the earlier High Court verdict, finding that there was no statutory reference to embryos and fetuses within New Zealand law, and therefore no grounds for further attempted interference with existing abortion access procedures. It did not however overturn the finding that there was de facto abortion on demand in New Zealand.[14]

Right to Life appealed to the New Zealand Supreme Court, which dismissed their appeal by a 3-2 majority.[15]