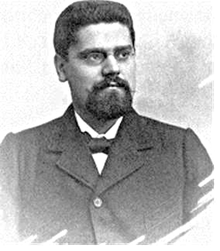 Italian philosopher Giovanni Gentile, who developed actual idealism. It contrasted the transcendental idealism of Kant and the Absolute Idealism of Hegel
For the philosophical approach in analytic philosophy, see Actualism.

Actual idealism was a form of idealism, developed by Giovanni Gentile, that grew into a 'grounded' idealism, contrasting the transcendental idealism of Immanuel Kant, and the absolute idealism of G. W. F. Hegel. To Gentile, his Actualism was the sole remedy to philosophically preserving free agency, by making the act of thinking self-creative and, therefore, without any contingency and not in the potency of any other fact.

Actual idealism holds that it is the act of thinking as perception, not creative thought as imagination, which defines reality. Therefore, one idea, or another, can only be a formulation of particulars within the bounds of a known totality, in which one idea is not on any side of those particulars. Totality constituting the whole cohesive reality, is negated in such idea by itself. Integration of totality against idea, in appealing to oneself, is the sole fruitful means of idea, which poses no favoritism to the developed ideas giving a knowing precedence to the world it has created itself into. Anything less is a presupposition and therefore innately unreal. This totality is the act of thinking, not thoughts so regarded by thinking.

While realists agree that the world known to them is the only one they possibly know 'as a static concept,' they continue to regard something real about the concept having nothing to do with their thinking. Actual idealists disregard the static concept, as totally false, in regard to the world for them where the only real is in 'the act of thinking' within being.

The stance of realism claims that repeatability of experience gives proof of a basis, which transcends and outruns our percepts, refuting Idealism. Yet it does not consider that the process of thinking, as creation, and the thought about thinking, as abstraction, interchange depending on the quality of one's act. It is the process of thinking that creates thought, which may not recur, but what occurs as thinking of it is what cannot be outrun as a conceptualization, for it is the very immanent process of it, which is what definitely is. Not as thoughts perceived, but as perceptive thinking prior to being construed outside its own totality as a thought, not made an abstraction, which cannot exist or be supposed to exist in any form outside one's thinking. Only one's thought reached from -and thus put outside of- thinking can be surpassed; but only by thinking, not by an abstract external.

Actual idealism, therefore, rejects the Hegelian 'Absolute' as being a presupposition unprovable to the mind, unless considered to be synonymous with what's known or the totality of the act of thinking. Which therein would put the dialectical processes making 'self' & 'not self' a consideration proving external existence real, insofar as it is in reality part of the self's own thinking, since the self, regarded alone, is always a concept and cannot be given reality as such. Neither does Actual idealism admit archetypal concepts in that possible conception of them in relation to all else gives them no reality. Gentile made a pivotal distinction to factors concerning Idealism's own criteria for reality, which have stood since Berkeley's adage "Esse est percipi" by distinguishing between "pensiero pensante" the 'act of thinking', and the 'static thought' "pensiero pensato".

Gentile posited then, that knowledge as thought fixed against a fuller range of thinking limits thinking's every proposition. If truth is what surpasses the conditions of every proposition, taking a known postulate as truth removes its criteria from having that capability in thinking. Objectifying actuality. Truth then cannot be known by thought, since knowledge held as thought is privative toward thinking as decided by what's thought. Only thinking as it penetrates, not given in to what categories of thought orient it, can be truth, so long as it does not resort to thought in doing so which would objectify it. Such thinking is truth because it therefore defines reality as by that thinking, rather than excluding truth from the possibility of thinking because of its relation to yielding thoughts. Only because thinking's results, namely thoughts, do not pertain to what is arising from its act, the truth, does thinking itself become questioned as a proper conductor of truth. That however does not detract from the nature of truths being defined within the act as the concrete. Thinking, being the condition in which truths are measured, in fact affirms thinking's own condition as truth, and when coupled with the idea that it generates thoughts which negate it, must the concrete be identified with thinking rather than simply being denied to thought, seen as abstract, and having that together assumed with thinking as denied also. For thinking cannot therefore be solely a producer of thoughts alone to Gentile, as is the position taken by materialists, because thoughts are to him what negate it, but must also be what produces the stable environment wherein being happens. Which then is the direct result of oneself as the further quality in which reality is not negated, as it is by thoughts to themselves.

Actual idealism was successful in that it promoted a theory of regarding thought, that garnered enough attention, to prove a competition to the new waves of positivism, and therefore materialist conceptions of social life that were vying for reformist tendencies in the politics of the time. Its ideas, therefore, were key to helping the Fascist party consolidate power in Italy with its own reform, and integral to giving Fascism the content of its philosophical sentiment. Despite this, Gentile claimed actual idealism to be the true variety of positivism, and the proper interpretation of the concept of positivism.[1]

Benedetto Croce objected that Gentile's "pure act" is nothing other than Schopenhauer's will.[2] However Schopenhauer "…came to rest in an Absolute which transcends concrete experience … and for (Schopenhauer) the Critical Philosophy was only a prolegomena or propaedeutic to a speculative or 'transcendent' philosophy of the kind which Gentile and Kant are united in opposing",[3] according to H. S. Harris's book on the basic metaphysics of Giovanni Gentile in contrast to that of Schopenhauer.