The Address Resolution Protocol (ARP) is a telecommunication protocol used for resolution of Internet layer addresses into link layer addresses, a critical function in computer networks. ARP was defined by RFC 826 in 1982,[1] is Internet Standard STD 37, and is also the name of the program for manipulating these addresses in most operating systems.

ARP is used for mapping a network address (e.g. an IPv4 address) to a physical address like an Ethernet address (also named a MAC address). ARP has been implemented with many combinations of network and data link layer technologies, like IPv4, Chaosnet, DECnet and Xerox PARC Universal Packet (PUP) using IEEE 802 standards, FDDI, X.25, Frame Relay and Asynchronous Transfer Mode (ATM). IPv4 over IEEE 802.3 and IEEE 802.11 is the most common usage.

In Internet Protocol Version 6 (IPv6) networks, the functionality of ARP is provided by the Neighbor Discovery Protocol (NDP).

The Address Resolution Protocol is a request and response protocol whose messages are encapsulated by a link layer protocol. It is communicated within the boundaries of a single network, never routed across internetwork nodes. This property places ARP into the Link Layer of the Internet Protocol Suite,[2] while in the Open Systems Interconnection (OSI) model, it is often described as residing in Layer 3, being encapsulated by Layer 2 protocols. However, ARP was not developed in the OSI networking framework.

The Address Resolution Protocol uses a simple message format containing one address resolution request or response. The size of the ARP message depends on the upper layer and lower layer address sizes, which are given by the type of networking protocol (usually IPv4) in use and the type of hardware or virtual link layer that the upper layer protocol is running on. The message header specifies these types, as well as the size of addresses of each. The message header is completed with the operation code for request (1) and reply (2). The payload of the packet consists of four addresses, the hardware and protocol address of the sender and receiver hosts.

The principal packet structure of ARP packets is shown in the following table which illustrates the case of IPv4 networks running on Ethernet. In this scenario, the packet has 48-bit fields for the sender hardware address (SHA) and target hardware address (THA), and 32-bit fields for the corresponding sender and target protocol addresses (SPA and TPA). Thus, the ARP packet size in this case is 28 bytes. The EtherType for ARP is 0x0806. (This appears in the Ethernet frame header when the payload is an ARP packet. Not to be confused with PTYPE below, which appears within this encapsulated ARP packet.)

ARP protocol parameter values have been standardized and are maintained by the Internet Assigned Numbers Authority (IANA).[6]

For example, picture two computers in an office (computer 1 and computer 2), connected to each other on the office local area network by Ethernet cables and network switches, with no intervening gateways or routers. Computer 1 has a packet to send to Computer 2. Through DNS, it determines that Computer 2 has an IP address of 192.168.0.55. In order to send the message, it also needs to know Computer 2's MAC address. First, Computer 1 uses a cached ARP table to look up 192.168.0.55 for any existing records of Computer 2's MAC address (00:eb:24:b2:05:ac). If the MAC address is found, it sends the IP packet encapsulated in a level 2 frame on the link layer to address 00:eb:24:b2:05:ac via the local network cabling. If the cache did not produce a result for 192.168.0.55, Computer 1 has to send a broadcast ARP message (destination FF:FF:FF:FF:FF:FF MAC address, which is accepted by all computers) requesting an answer for 192.168.0.55. Computer 2 responds with its MAC address (and its IP). (Computer 2 may insert an entry for Computer 1 into its own ARP table for future use.) Computer 1 caches the response information in its own ARP table and can now send the packet.[7]

An ARP probe is an ARP request constructed with an all-zero sender IP address (SPA). The term is used in the IPv4 Address Conflict Detection specification (RFC 5227). Before beginning to use an IPv4 address (whether received from manual configuration, DHCP, or some other means), a host implementing this specification must test to see if the address is already in use, by broadcasting ARP probe packets.[8]

ARP may also be used as a simple announcement protocol. This is useful for updating other hosts' mappings of a hardware address when the sender's IP address or MAC address has changed. Such an announcement, also called a gratuitous ARP message, is usually broadcast as an ARP request containing the senders protocol address (SPA) in the target field (TPA=SPA), with the target hardware address (THA) set to zero. An alternative way is to broadcast an ARP reply with the sender's hardware and protocol addresses (SHA and SPA) duplicated in the target fields (TPA=SPA, THA=SHA).

The gratuitous ARP request message and the gratuitous ARP reply messages are standards-based methods,[9][10] but the "ARP Request" is preferred.[11] Some devices may be configured for the use of either of these two types of GARP.[12]

An ARP announcement is not intended to solicit a reply; instead it updates any cached entries in the ARP tables of other hosts that receive the packet. The operation code may indicate a request or a reply because the ARP standard specifies that the opcode is only processed after the ARP table has been updated from the address fields.[13][14][15]

Many operating systems perform gratuitous ARP during startup. That helps to resolve problems which would otherwise occur if, for example, a network card was recently changed (changing the IP-address-to-MAC-address mapping) and other hosts still have the old mapping in their ARP caches.

Gratuitous ARP is also used by some interface drivers to provide load balancing for incoming traffic. In a team of network cards, it is used to announce a different MAC address within the team that should receive incoming packets.

ARP announcements can be used to defend link-local IP addresses in the Zeroconf protocol (RFC 3927), and for IP address takeover within high-availability clusters.

ARP mediation refers to the process of resolving Layer 2 addresses through a Virtual Private Wire Service (VPWS) when different resolution protocols are used on the connected circuits, e.g., Ethernet on one end and Frame Relay on the other. In IPv4, each Provider Edge (PE) device discovers the IP address of the locally attached Customer Edge (CE) device and distributes that IP address to the corresponding remote PE device. Then each PE device responds to local ARP requests using the IP address of the remote CE device and the hardware address of the local PE device. In IPv6, each PE device discovers the IP address of both local and remote CE devices and then intercepts local Neighbor Discovery (ND) and Inverse Neighbor Discovery (IND) packets and forwards them to the remote PE device.[16]

Inverse Address Resolution Protocol (Inverse ARP or InARP) is used to obtain Network Layer addresses (for example, IP addresses) of other nodes from Data Link Layer (Layer 2) addresses. It is primarily used in Frame Relay (DLCI) and ATM networks, in which Layer 2 addresses of virtual circuits are sometimes obtained from Layer 2 signaling, and the corresponding Layer 3 addresses must be available before those virtual circuits can be used.[17]

Since ARP translates Layer 3 addresses to Layer 2 addresses, InARP may be described as its inverse. In addition, InARP is implemented as a protocol extension to ARP: it uses the same packet format as ARP, but different operation codes. 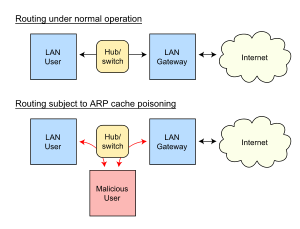 Because ARP does not provide methods for authenticating ARP replies on a network, ARP replies can come from systems other than the one with the required Layer 2 address. An ARP proxy is a system which answers the ARP request on behalf of another system for which it will forward traffic, normally as a part of the network's design, such as for a dialup internet service. By contrast, in ARP spoofing the answering system, or spoofer, replies to a request for another system's address with the aim of intercepting data bound for that system. A malicious user may use ARP spoofing to perform a man-in-the-middle or denial-of-service attack on other users on the network. Various software exists to both detect and perform ARP spoofing attacks, though ARP itself does not provide any methods of protection from such attacks.[19]

Each computer maintains its own table of the mapping from Layer 3 addresses (e.g. IP addresses) to Layer 2 addresses (e.g. ethernet MAC addresses). In a modern computer this is maintained almost entirely by ARP packets on the local network and is thus often called the 'ARP cache' as opposed to 'Layer 2 address table'. In older computers, where broadcast packets were considered an expensive resource, other methods were used to maintain this table, such as static configuration files,[20] or centrally maintained lists.

Since at least the 1980s,[21] networked computers have had a command called 'arp' for interrogating or manipulating this table, and practically all modern personal computers have a variant of this.[22][23][24]

Embedded systems such as networked cameras[25] and networked power distribution devices,[26] which lack a user interface, can use so-called ARP stuffing to make an initial network connection, although this is a misnomer, as ARP is not involved. This is a solution to an issue in network management of consumer devices, specifically the allocation of IP addresses of ethernet devices where 1) the user doesn't have the ability to control DHCP or similar address allocation protocols, 2) the device doesn't have a user interface to configure it with, and 3) the user's computer can't communicate with it because it has no suitable IP address.

The solution adopted is as follows: the user's computer has an IP address stuffed manually into its address table (normally with the arp command with the MAC address taken from a label on the device) and then sends special packets to the device, typically a ping packet with a non-default size. The device then adopts this IP address, and the user then communicates with it by telnet or web protocols to complete the configuration. Such devices typically have a method to disable this process once the device is operating normally, as it is vulnerable to attack.