Not to be confused with H.248/Megaco, a similar protocol.

The Media Gateway Control Protocol (MGCP) is a signaling and call control communications protocol used in voice over IP (VoIP) telecommunication systems. It implements the media gateway control protocol architecture for controlling media gateways on Internet Protocol (IP) networks connected to the public switched telephone network (PSTN).[1] The protocol is a successor to the Simple Gateway Control Protocol (SGCP), which was developed by Bellcore and Cisco, and the Internet Protocol Device Control (IPDC).[2]

The methodology of MGCP reflects the structure of the PSTN with the power of the network residing in a call control center softswitch which is analogous to the central office in the telephone network. The endpoints are low-intelligence devices, mostly executing control commands and providing result indications in response. The protocol represents a decomposition of other VoIP models, such as H.323, in which the H.323 Gatekeeper, have higher levels of signaling intelligence. 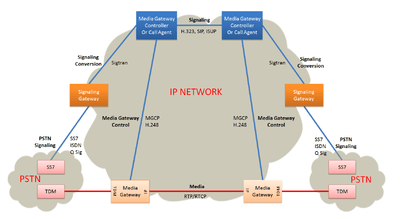 The media gateway control protocol architecture and its methodologies and programming interfaces are described in RFC 2805.[3]

MGCP is a master/slave protocol that allows a call control device such as a Call Agent to take control of a specific port on a media gateway. In MGCP context media gateway controller is referred to as call agent. This has the advantage of centralized gateway administration and provides for largely scalable IP Telephony solutions. The distributed system is composed of a call agent, at least one media gateway (MG) that performs the conversion of media signals between circuits and packets switched networks, and at least one signaling gateway (SG) when connected to the PSTN.

MGCP also allows the Call Agent to audit the current state of endpoints on a media gateway.

The media gateway uses MGCP to report events, such as off-hook or dialed digits, to the Call Agent.

Typically, a media gateway is configured with a list of Call Agents from which it may accept programming (where that list normally comprises only one or two Call Agents).

In principle, event notifications may be sent to different Call Agents for each endpoint on the gateway (as programmed by the Call Agents, by setting the NotifiedEntity parameter). In practice, however, it is usually desirable that at any given moment all endpoints on a gateway should be controlled by the same Call Agent; other Call Agents are available only to provide redundancy in the event that the primary Call Agent fails, or loses contact with the media gateway. In the event of such a failure it is the backup Call Agent's responsibility to reprogram the MG so that the gateway comes under the control of the backup Call Agent. Care is needed in such cases; two Call Agents may know that they have lost contact with one another, but this does not guarantee that they are not both attempting to control the same gateway. The ability to audit the gateway to determine which Call Agent is currently controlling can be used to resolve such conflicts.

MGCP assumes that the multiple Call Agents will maintain knowledge of device state among themselves (presumably with an unspecified protocol) or rebuild it if necessary (in the face of catastrophic failure). Its failover features take into account both planned and unplanned outages.

MGCP is a text-based protocol using a command and response model. Commands and responses are encoded in messages that are structured and formatted with the whitespace characters space, horizontal tab, carriage return, and linefeed, and the colon and the full stop. Messages are transmitted using the User Datagram Protocol (UDP). Media gateways use the port number 2427, and call agents use 2727 by default.

The message sequence of command (or request) and its response is known as a transaction, which is identified by the numerical Transaction Identifier exchanged in each transaction. The protocol specification defines nine standard commands that are distinguished by a four-letter command verb: AUEP, AUCX, CRCX, DLCX, EPCF, MDCX, NTFY, RQNT, and RSIP. Responses begin with a three-digit numerical response code that identifies the outcome or result of the transaction.

Two verbs are used by a call agent to query the state of an endpoint:

Three verbs are used by a call agent to manage the connection between a media gateway.

One verb is used by a call agent to request notification of events on the endpoint, and to apply signals:

One verb is used by a call agent to modify coding characteristics expected by the line side of the endpoint:

One verb is used by an endpoint to indicate to the call agent that it has detected an event for which the call agent had previously requested notification with the RQNT command:

One verb is used by an endpoint to indicate to the call agent that it is in the process of restarting:

Another implementation of the media gateway control protocol architecture is the H.248/Megaco protocol, a collaboration of the Internet Engineering Task Force (RFC 3525) and the International Telecommunication Union (Recommendation H.248.1). Both protocols follow the guidelines of the overlying media gateway control protocol architecture, as described in RFC 2805. However, the protocols are incompatible due to differences in protocol syntax and underlying connection model.