In computer networking, Layer 2 Tunneling Protocol (L2TP) is a tunneling protocol used to support virtual private networks (VPNs) or as part of the delivery of services by ISPs. It does not provide any encryption or confidentiality by itself. Rather, it relies on an encryption protocol that it passes within the tunnel to provide privacy.[1]

The entire L2TP packet, including payload and L2TP header, is sent within a User Datagram Protocol (UDP) datagram. It is common to carry PPP sessions within an L2TP tunnel. L2TP does not provide confidentiality or strong authentication by itself. IPsec is often used to secure L2TP packets by providing confidentiality, authentication and integrity. The combination of these two protocols is generally known as L2TP/IPsec (discussed below).

The two endpoints of an L2TP tunnel are called the LAC (L2TP Access Concentrator) and the LNS (L2TP Network Server). The L2TP LNS waits for new tunnels. Once a tunnel is established, the network traffic between the peers is bidirectional. To be useful for networking, higher-level protocols are then run through the L2TP tunnel. To facilitate this, an L2TP session (or 'call') is established within the tunnel for each higher-level protocol such as PPP. Either the LAC or LNS may initiate sessions. The traffic for each session is isolated by L2TP, so it is possible to set up multiple virtual networks across a single tunnel. MTU should be considered when implementing L2TP.

L2TP allows the creation of a virtual private dialup network (VPDN)[3] to connect a remote client to its corporate network by using a shared infrastructure, which could be the Internet or a service provider's network.

A L2TP tunnel can extend across an entire PPP session or only across one segment of a two-segment session. This can be represented by four different tunneling models, namely:

An L2TP packet consists of :

Flags and version
control flags indicating data/control packet and presence of length, sequence, and offset fields.
Length (optional)
Total length of the message in bytes, present only when length flag is set.
Tunnel ID
Indicates the identifier for the control connection.
Session ID
Indicates the identifier for a session within a tunnel.
Ns (optional)
sequence number for this data or control message, beginning at zero and incrementing by one (modulo 216) for each message sent. Present only when sequence flag set.
Nr (optional)
sequence number for expected message to be received. Nr is set to the Ns of the last in-order message received plus one (modulo 216). In data messages, Nr is reserved and, if present (as indicated by the S bit), MUST be ignored upon receipt..
Offset Size (optional)
Specifies where payload data is located past the L2TP header. If the offset field is present, the L2TP header ends after the last byte of the offset padding. This field exists if the offset flag is set.
Offset Pad (optional)
Variable length, as specified by the offset size. Contents of this field are undefined.
Payload data
Variable length (Max payload size = Max size of UDP packet − size of L2TP header)

The list of L2TP Control messages exchanged between LAC and LNS, for handshaking before establishing a tunnel and session in voluntary tunneling method are 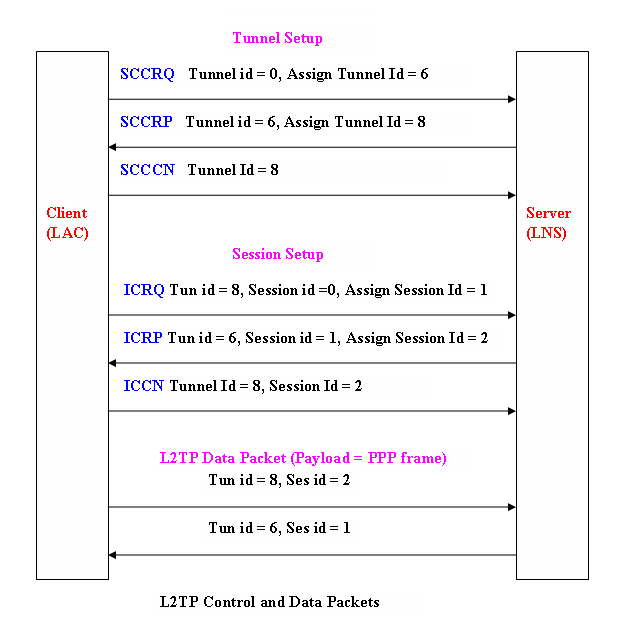 Because of the lack of confidentiality inherent in the L2TP protocol, it is often implemented along with IPsec. This is referred to as L2TP/IPsec, and is standardized in IETF RFC 3193. The process of setting up an L2TP/IPsec VPN is as follows:

When the process is complete, L2TP packets between the endpoints are encapsulated by IPsec. Since the L2TP packet itself is wrapped and hidden within the IPsec packet, no information about the internal private network can be garnered from the encrypted packet. Also, it is not necessary to open UDP port 1701 on firewalls between the endpoints, since the inner packets are not acted upon until after IPsec data has been decrypted and stripped, which only takes place at the endpoints.

A potential point of confusion in L2TP/IPsec is the use of the terms tunnel and secure channel. The term tunnel refers to a channel which allows untouched packets of one network to be transported over another network. In the case of L2TP/PPP, it allows L2TP/PPP packets to be transported over IP. A secure channel refers to a connection within which the confidentiality of all data is guaranteed. In L2TP/IPsec, first IPsec provides a secure channel, then L2TP provides a tunnel.

Windows Vista provides two new configuration utilities that attempt to make using L2TP without IPsec easier, both described in sections that follow below:

Both these configuration utilities are not without their difficulties, and unfortunately, there is very little documentation about both "netsh advfirewall" and the IPsec client in WFwAS. One of the aforementioned difficulties is that it is not compatible with NAT. Another problem is that servers must be specified only by IP address in the new Vista configuration utilities; the hostname of the server cannot be used, so if the IP address of the IPsec server changes, all clients will have to be informed of this new IP address (which also rules out servers that addressed by utilities such as DynDNS).

L2TP is often used by ISPs when internet service over for example ADSL or cable is being resold. From the end user, packets travel over a wholesale network service provider's network to a server called a Broadband Remote Access Server (BRAS), a protocol converter and router combined. On legacy networks the path from end user customer premises' equipment to the BRAS may be over an ATM network. From there on, over an IP network, an L2TP tunnel runs from the BRAS (acting as LAC) to an LNS which is an edge router at the boundary of the ultimate destination ISP's IP network. See example of reseller ISPs using L2TP.