Aditi Rao Hydari is an Indian film actress who works predominantly in the Hindi and Tamil language films. She was born in the family of Muhammad Saleh Akbar Hydari and J. Rameshwar Rao in Hyderabad. Hydari made her on screen debut in the Malayalam film Prajapathi (2006) alongside veteran actor Mammootty. The film had her play the role of a devadasi and her performance in the film garnered positive reviews from critics.

Hydari rose to fame after her performance in Sudhir Mishra's 2011 romantic thriller film Yeh Saali Zindagi, a role that won her the Screen Award in the Best Supporting Actress category. She has subsequently starred in several successful Bollywood films including Rockstar (2011), Murder 3 (2013), Khoobsurat (2014), Wazir (2016) and Fitoor (2016). She is also a classical bharatanatyam dancer and trained under Leela Samson.

Hydari was born on 28 October into two royal lineages, that of Muhammad Saleh Akbar Hydari and J. Rameshwar Rao of erstwhile Raja of Wanaparthy family.[1] She is the great granddaughter of Akbar Hydari and the grand niece of Muhammad Saleh Akbar Hydari, former Governor of Assam.[2] Filmmaker Kiran Rao is her maternal first cousin.[3] Her maternal grandparents are Raja J Rameshwar Rao, who headed the administration of Wanaparthi state during its day, and Shanta Rameshwar Rao,[1] a much respected educationalist in the city of Hyderabad and the chairperson of publishing house Orient Blackswan. Her mother has Mangalorean Konkani roots.[4] Aditi started learning Bharatanatyam at age six and became a disciple of acclaimed dancer Leela Samson.[5] She did her schooling at Rishi Valley School, near Bangalore and graduated from Lady Shri Ram College, University of Delhi. 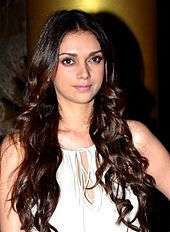 Hydari made her acting debut with the 2007 Tamil film Sringaram, in which she played the lead character, as a devadasi.[5] The film itself was based on classical dance, being directed by Sharada Ramanathan and produced by Padmini Ravi, two noted bharatanatyam dancers. Hydari was approached and offered the role, after Ramanathan saw her dance performance at a conference.[6] The film received critical acclaim and fetched several accolades, including three National Film Awards.[6] Her first film to release in theatres, however, was the 2006 Malayalam film Prajapathi, in which she starred alongside Mammootty.[7] In 2009, she played a supporting role in Delhi-6, directed by Rakeysh Omprakash Mehra.

In 2011 Hydari appeared in the film Yeh Saali Zindagi, for which she won the screen award.[8] In 2011 she also starred in the Bollywood film Rockstar.[9] She has appeared in Airtel 3G advertisement in April 2011[10] In 2012 she played the female lead in the movie London, Paris, New York opposite Ali Zafar.[11][11] With this movie, she made her singing debut by singing two of the songs.[1] Hydari received mixed reviews for her performance. The film was a commercial failure.

In 2013, she became a part of Mahesh Bhatt's Murder franchise,[2] when she was cast as Roshni opposite Randeep Hooda in Vishesh Bhatt's directorial film Murder 3.[2][12] Hydari received positive reviews for her performance, Taran Adarsh of Bollywood Hungama wrote, "Aditi and Sara are show stoppers. Both deliver knockout performances,"[13] and Roshni Devi of Koimoi stated that "Aditi's performance is pillar for the film."[14] The film was an average grosser, earning ₹25 crore (US$3.7 million). Hydari then starred opposite Akshay Kumar in the action film Boss directed by Anthony D'Souza.[15] She played the romantic interest of the lead character played by Kumar. The film received mixed response from critics but was a box-office success.[16][17] 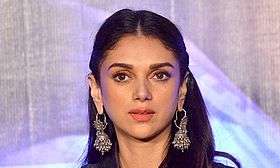 Hydari at Media meet of Wazir at Ludhiana

In 2016, Hydari starred alongside Amitabh Bachchan, Farhan Akhtar in Bejoy Nambiar's crime thriller film Wazir.[18] The film tells the story of two unusual friends, a wheelchair-bound chess grandmaster, played by Bachchan and a grief-stricken ATS officer, played by Akhtar. Hydari played the love interest of Akhtar's character. The film released on 8 January 2016 to mostly positive reviews and had the box-office collection of around ₹62 crore (US$9.2 million).[19][20] Hydari also garnered praise for her performance. Gayatri Gauri in her review for Firstpost called Hyadri's performance a "welcome change from glamorous heroines we usually see on screen."[21] Abhijit Bhaduri of The Times of India said that despite the lack of focus on her character she did justice to her part by "conveying stuff with her eyes."[22] Ananya Bhattacharya of India Today gave Hydari the highest praise saying that she "brings vulnerability to her Ruhana" added that she "has to her credit several strong sequences."[23]

Hydari next starred in Abhishek Kapoor's romantic drama film Fitoor along with Tabu, Aditya Roy Kapur and Katrina Kaif.[24] The film based on Charles Dickens' novel Great Expectations, had Hydari play the role of the younger Miss Havisham (played by Tabu).[25] The film was released on 12 February 2016 to mixed reviews and underperformed at the box-office.[26] However, Hydari garnered praise for her performance. Sarita Tanwar of Daily News and Analysis in her review wrote, "Aditi Rao Hydari does full justice to the part of young Begum", and Surabhi Redkar of Koimoi deemed her "stunning".[27][28]

In 2005[5] and 2009[7] it was reported that she was married to Satyadeep Mishra, a former Assistant Commissioner of Income Tax and Indian Revenue Service officer.[29][30] While the actress had declined to comment on her marital status in a 2012 interview,[31] in a 2013 interview she mentioned that they were separated.[2]