Tabu (born Tabassum Fatima Hashmi on 4 November 1971)[1][2] is an Indian film actress. She has primarily acted in Hindi films, and has also appeared in English, Telugu, Tamil, Malayalam, Marathi and Bengali language films. She has won the National Film Award for Best Actress twice, and has received six Filmfare Awards, including a record four Critics Award for Best Actress. She was awarded the Padma Shri by the Government of India in 2011.[3]

She is reluctant to discuss her personal life in the media, which has led to her being labelled a recluse.[5][6]

Tabassum Fatima Hashmi was born to Jamal Hashmi and Rizwana.[1][7] Her parents divorced soon after; .[8] Her mother was a school teacher and her maternal grandparents were retired professors who ran a school. Her grandfather, Mohammed Ahsan, was a professor of Mathematics, and her grandmother was a professor of English Literature. She went to St. Anns High school in Hyderabad. Tabu moved to Mumbai in 1983 and studied at St. Xavier's College for two years.[9]

She is the niece of Shabana Azmi and Baba Azmi and the younger sister of actress Farah Naaz. She speaks Urdu, Telugu, Hindi and English.[10]

Tabassum "Tabu" Hashmi did a small appearance in the film "Bazaar" in 1980, and later in the film Hum Naujawan (1985) at the age of fourteen; she played Dev Anand's daughter in the film. Her first role as an actress was in the Telugu film Coolie No.1 co-starred with Venkatesh. In December 1987, Boney Kapoor launch two Big Films, Roop Ki Rani Choron Ka Raja and Prem. In Prem, Tabu was signed opposite Sanjay Kapoor. The film took eight years in making and it was the biggest flop in Boney Kapoor's production career. Fortunately Tabu's career took off well after this film in spite of the long delay.

Tabu's first release in Hindi as a leading lady was Pehla Pehla Pyar which went un-noticed.[11] She came into prominence with her role in Vijaypath (1994) opposite Ajay Devgan for which she received the Filmfare Best Female Debut Award. This was followed by many films that did not do well at the box office.

In 1996, Tabu had eight releases. Two films Saajan Chale Sasural and Jeet went on to be hits; both were within the top five films of that year.[12] Her other significant film, Maachis, was critically acclaimed. Her role as a Punjabi woman caught in the rise of Sikh insurgency was acclaimed; she went on to win her first National Film Award for Best Actress for her performance. The same year saw her major blockbuster films down south. Critically acclaimed Malayalam period epic film Kalapani directed by Priyadarshan with Mohanlal and Prabhu Ganesan in the lead roles, brought her laurels for her acting from all across South India. She also debuted in Kollywood through the highly successful Tamil film Kadhal Desam directed by Kathir with Abbas and Vineeth.

Tabu's first release of 1997 was Border. The movie was about the real life events surrounding the Battle of Longewala during the 1971 Indo-Pak war. She played the role of Sunny Deol's wife. Her role was small but the film went on to be the biggest hit of 1997.[13] That year, she also starred in the critically acclaimed film Virasat. The film was a success at the box office; Tabu won the Filmfare Critics Award for Best Performance.

In 1999, she starred in two successful multi-starrer films Biwi No.1 and Hum Saath-Saath Hain: We Stand United. They were the first and second biggest hits of that year respectively.[14] 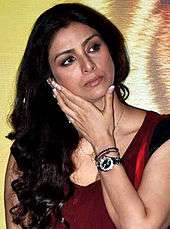 In 2000, the actress starred in Hera Pheri and Astitva. The former was a box office success whilst the latter was critically acclaimed. Hindustan Times critic Arnab Banerjee wrote of her performance, "Tabu is brilliant and once again proves her mettle as an actress. The mind-blowing range of emotions she displays, her exquisite face and her subtle quiet dignity with which she handles her character, will take her far in her film career."[15][16] She received her third Filmfare Critics Award for Best Performance for Astitva.[17] Down south, Tabu had two releases in Tamil, namely, Kandukondain Kandukondain, a multi-starrer blockbuster film directed by Rajeev Menon and Snegithiye directed by Priyadarshan,along with a Malayalam release Cover Story. Original Malayalam version of Snegithiye which is Raakilipattu was later released in 2007.

2001 saw her star in Chandni Bar directed by Madhur Bhandarkar. Her portrayal of a bar dancer met with unanimous praise, and she won her second National Film Award for Best Actress for her performance.[18] Critic, Taran Adarsh said, "Chandni Bar is Tabu's film all the way and there are no two opinions on that. Her performance deserves the highest marks and of course, all the awards. Her work is flawless and the impact her character makes on the minds of the viewer is also due to a tailor-made role".[19] Another critic mentioned, "if there is one actress who can carry a film on her shoulders, it is Tabu. As usual, she sparkles".[20]

She has acted in a number of Telugu movies, many of them very successful, such as Coolie No. 1 and Ninne Pelladutha, the latter being one of her most famous and popular movies.[21] She further continued to star in films such as Chennakeshava Reddy and Pandurangadu with Nandamuri Balakrishna, Andarivadu with Chiranjeevi and Aavida Maa Aavide with Akkineni Nagarjuna. Tabu made a reentry into Telugu movies after a long hiatus with the film Pandurangudu in 2008. At this time, she was 38 years old. Her roles in Telugu movies largely focused on glamorous roles.

In 2003, Tabu starred in an adaptation of William Shakespeare's Macbeth. The actress played Nimmi based on the character Lady Macbeth. The film titled Maqbool was directed by Vishal Bhardwaj and premiered at the 2003 Toronto International Film Festival.[22] Maqbool was a box office failure but was met with huge acclaim. Tabu's performance opened to much appreciation; critic Ron Ahluwalia said, "Tabu shines in a dark role. The most versatile actress in Bollywood takes to villainy like a second nature. She is menacing and seductive, but keeps an innocent look on her face, making her even viler. The way Tabu delivers her taunts simply perfect. Her gradual insanity is heart-wrenching and her final outburst is easily the highlight of the film."[23] Another critic said, "Tabu is fantastic in a complex role. Her performance in the film is worthy of awards. After Chandni Bar, this is another role that will be remembered for a long, long time."[24]

She had a supporting role in Fanaa (2006), with Aamir Khan and Kajol. The film went on to become the fourth biggest hit of that year.[25]

In 2007, Tabu starred in her first Hollywood film, The Namesake, directed by Mira Nair. The film was a big hit overseas.[26] She also starred in Cheeni Kum in which she played a 34-year-old woman who falls in love with a 64-year-old played by Amitabh Bachchan. Critics were generally positive towards the film; Taran Adarsh said, "Tabu stands on her feet despite a formidable co-star's domineering presence. She's excellent."[27] Though the film did not do as well domestically, it performed well overseas, especially in UK and US.[28]

She started off 2009 by being featured on the cover of Vogue India's January 2009 issue. 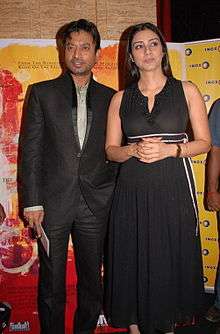 Tabu at the premiere of The Namesake with Irrfan Khan

In 2010, Tabu portrayed the lead role in the romantic comedy film Toh Baat Pakki!, which earned huge publicity as it marked Tabu's return to Bollywood after three years. However, the film was a commercial failure. Her next release of the year was Khuda Kasam opposite Sunny Deol. Her other film Banda Yeh Bindaas Hai directed by B. R. Chopra got indefinitely shelved owing to the plagiarism issues. She made a comeback to Malayalam cinema in 2011 with her brief song appearance in the multi starrer film, Urumi, directed by Santosh Sivan. The song "Aaranne Aaranne" featuring Tabu alongside Prabhu Deva and Prithviraj Sukumaran was declared a chartbuster of the year.

In 2012, she featured in her second Hollywood film, Life of Pi, directed by Ang Lee. She played a supporting role as the mother of the protagonist. Her next and only release in 2013 was David, a Tamil – Hindi bilingual film, starring Vikram in the lead and directed by Bejoy Nambiar. The year 2014 saw her comeback to mainstream commercial cinema with Salman Khan starrer Jai Ho, a remake of Telugu film Stalin, playing the elder sister role to Khan. The film evoked mixed response and was a failure at the box-office. Following this, she teamed up with her Maqbool director Vishal Bhardwaj for his adaptation film of Shakespeare's Hamlet titled as Haider. In this, she played the mother role to Shahid Kapoor's character and her performance was critically acclaimed. Her next venture saw her teaming up with actor Ajay Devgn after a gap of 14 years. She paired opposite him in Nishikant Kamat's murder-mystery film Drishyam which was a remake of the successful Malayalam film with the same title. Her performance of a strict police officer investigating her son's murder case received rave reviews and unanimous praise. This was followed by a cameo appearance in Meghna Gulzar's directorial Talvar.

Her forthcoming projects include Abhishek Kapoor's next directorial Fitoor opposite Aditya Roy Kapoor and Katrina Kaif. She also has a psychological thriller film titled Missing, produced by actor Manoj Bajpai, in her kitty.

In 1998, Tabu was charged with poaching two blackbuck in Kankani during the filming of Hum Saath Saath Hain along with co-stars Salman Khan, Saif Ali Khan, Sonali Bendre and Neelam Kothari. [29] A lower court charged her with the others under the Wildlife Act and the IPC. She had filed a revision petition before a sessions court which discharged her of Section 51 (causing harm to wildlife) of Wildlife Act and both of 147 (punishment for rioting) and 149 (unlawful assembly of persons) of the Indian Penal Code. [30] The Rajasthan state government then filed a revision petition before the Rajasthan high court which again added Section 149 against her, which it had dropped. In December 2012, the Jodhpur court summoned her along with all the accused for commencement of the trial with the revised charges on 4 February 2013. [31]

Main article: List of awards and nominations received by Tabu

Tabu has been the recipient of two National Film Award for Best Actress for her roles in Maachis (1996) and Chandni Bar (2001). She has also won six Filmfare Awards, four for Critics Award for Best Actress for Virasat (1997), Hu Tu Tu (1999), Astitva (2000) and Cheeni Kum (2007) and one each for Best Female Debut for Vijaypath (1994) and Best Supporting Actress for Haider (2014), and one Filmfare Awards South for Best Supporting Actress – Telugu.