This article is about mythological ages. For the "Seven Ages of Man" speech from Shakespeare's "As You Like It", see All the world's a stage. For the one-man show, see Ages of Man (play). 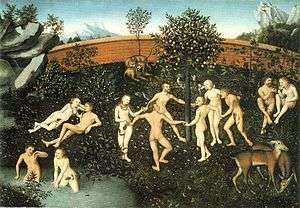 The Ages of Man are the stages of human existence on the Earth according to Greek mythology and its subsequent Roman interpretation.

Both Hesiod and Ovid offered accounts of the successive ages of humanity, which tend to progress from an original, long-gone age in which humans enjoyed a nearly divine existence to the current age of the writer, in which humans are beset by innumerable pains and evils. In the two accounts that survive from ancient Greece and Rome, this degradation of the human condition over time is indicated symbolically with metals of successively decreasing value. 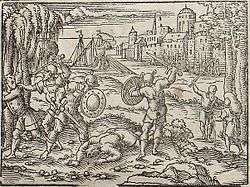 The first extant account of the successive ages of humanity comes from the Greek poet Hesiod's Works and Days (lines 109–201). His list is:

The Roman poet Ovid (1st century BC – 1st century AD) tells a similar myth of Four Ages in Book 1.89–150 of the Metamorphoses. His account is similar to Hesiod's with the exception that he omits the Heroic Age. Ovid emphasizes the justice and peace that defined the Golden Age. He adds that in this age, men did not yet know the art of navigation and therefore did not explore the larger world, no man had knowledge of any arts but pre agriculture. In the Silver Age, Jupiter introduces the seasons and men consequentially learn the art of agriculture and architecture. In the Bronze Age, Ovid writes, men were prone to warfare, but not impiety. Finally, in the Iron Age, men demarcate nations with boundaries; they learn the arts of navigation and mining; they are warlike, greedy and impious. Truth, modesty and loyalty are nowhere to be found.