In archaeology, mesolithic (Greek: μεσος, mesos "middle"; λιθος, lithos "stone") is the culture between paleolithic and neolithic. The term "Epipaleolithic" is often used for areas outside northern Europe, but was also the preferred synonym used by French archaeologists until the 1960s.

Mesolithic has different time spans in different parts of Eurasia. It was originally post-Pleistocene, pre-agricultural material in northwest Europe about 10,000 to 5,000 BC, but material from the Levant (about 20,000 to 9,500 BC) is also labelled mesolithic. 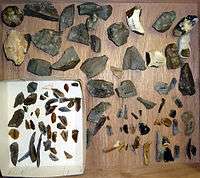 The term "Mesolithic" is in competition with another term, "Epipaleolithic", which means the "final Upper Palaeolithic industries occurring at the end of the final glaciation which appear to merge technologically into the Mesolithic".[1]

In the archaeology of Northern Europe, for example for archaeological sites in Great Britain, Germany, Scandinavia, Ukraine, and Russia, the term "Mesolithic" is almost always used. In the archaeology of other areas, the term "Epipaleolithic" may be preferred by most authors, or there may be divergences between authors over which term to use or what meaning to assign to each. In the New World, neither term is used (except provisionally in the Arctic).

A Spanish scholar, Alfonso Moure, says in this regard:[2]

In the terminology of prehistoric archeology, the most widespread trend is to use the term "Epipaleolithic" for the industrial complexes of post-glacial hunter-gatherer groups. Conversely, those that are in course of transition toward artificial food production are assigned to the "Mesolithic".

In the archaeology of sub-Saharan Africa, Lower Paleolithic is replaced by "Early Stone Age", Middle Paleolithic is replaced by "Middle Stone Age" and Upper Paleolithic by "Later Stone Age" according to the terminology introduced by John Hilary Goodman and Clarence van Riet Lowe of South Africa in the early 20th century. Therefore, care must be taken in translating "Mesolithic" as "Middle Stone Age", as the latter term has an unrelated technical meaning in the context of African archaeology.

The three -lithics are subdivisions of the Stone Age in the three-age system developed since classical times and given a modern archaeological meaning by Christian Jürgensen Thomsen, a Danish archaeologist, in the early 19th century. Subdivisions of "earlier" and "later" were added to the Stone Age by Thomsen and especially his junior colleague and employee Jens Jacob Asmussen Worsaae. John Lubbock kept these divisions in his work Pre-historic Times in 1865 and introduced the terms Paleolithic ("Old Stone Age") and Neolithic ("New Stone Age") for them. He saw no need for an intermediate category.

When Hodder Westropp introduced the Mesolithic in 1866, as a technology intermediate between Paleolithic and Neolithic, a storm of controversy immediately arose around it. A British school led by John Evans denied any need for an intermediate. The ages blended together like the colors of a rainbow, he said. A European school led by Louis Laurent Gabriel de Mortillet asserted that there was a gap between the earlier and later. Edouard Piette claimed to have filled the gap with his discovery of the Azilian Culture. Knut Stjerna offered an alternative in the Epipaleolithic, a continuation of the use of Paleolithic technology. By the time of Vere Gordon Childe's work, The Dawn of Europe (1947), which affirms the Mesolithic, sufficient data had been collected to determine that the Mesolithic was in fact necessary and was indeed a transition and intermediary between the Paleolithic and the Neolithic.[3]

The start and end dates of the Mesolithic vary by geographical region. Childe's view prevails that the term generally covers the period between the end of the Pleistocene and the start of the Neolithic. The times of these events vary greatly; moreover, the various Mesolithics within the span might be as short as roughly a thousand years or as long as roughly 15,000 years depending on the circumstances. If the Mesolithic is more similar to the Paleolithic it is called the Epipaleolithic.

The Paleolithic was an age of purely hunting and gathering while in the Neolithic domestication of plants and animals had occurred. Some Mesolithic peoples continued with intensive hunting. Others were practising the initial stages of domestication (see Khiamian).

The type of tool remains the diagnostic factor: The Mesolithic featured composite devices manufactured with Mode V chipped stone tools (microliths). The Paleolithic had utilized Modes I-IV and the Neolithic mainly abandoned the chipped microliths in favor of polished, not chipped, stone tools.

The first period, known as Mesolithic 1 (Kebarian culture; 20–18,000 BC to 12,150 BC), followed the Aurignacian or Levantine Upper Paleolithic periods throughout the Levant. By the end of the Aurignacian, gradual changes took place in stone industries. Small stone tools called microliths and retouched bladelets can be found for the first time. The microliths of this culture period differ greatly from the Aurignacian artifacts. This period is more properly called Epipaleolithic.

By 20,000 to 18,000 BC the climate and environment had changed, starting a period of transition. The Levant became more arid and the forest vegetation retreated, to be replaced by steppe. The cool and dry period ended at the beginning of Mesolithic 1. The hunter-gatherers of the Aurignacian would have had to modify their way of living and their pattern of settlement to adapt to the changing conditions. The crystallization of these new patterns resulted in Mesolithic 1. New types of settlements and new stone industries developed.

The inhabitants of a small Mesolithic 1 site in the Levant left little more than their chipped stone tools behind. The industry was of small tools made of bladelets struck off single-platform cores. Besides bladelets, burins and end-scrapers were found. A few bone tools and some ground stone have also been found. These so-called Mesolithic sites of Asia are far less numerous than those of the Neolithic and the archeological remains are very poor.

The second period, Mesolithic 2, is also called the Natufian culture. The change from Mesolithic 1 to Natufian culture can be dated more closely. The latest date from a Mesolithic 1 site in the Levant is 12,150 BC. The earliest date from a Natufian site is 11,140 BC. This period is characterized by the early rise of agriculture that would later emerge into the Neolithic period. Radiocarbon dating places the Natufian culture between 12,500 and 9500 BC, just before the end of the Pleistocene.[4] This period is characterised by the beginning of agriculture.[5] The earliest known battle occurred during the Mesolithic period at a site in Egypt known as Cemetery 117. 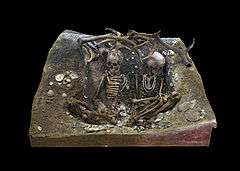 The Mesolithic began with the Holocene warm period around 11,660 BP and ended with the introduction of farming, the date of which varied in each geographical region. Regions that experienced greater environmental effects as the last glacial period ended have a much more apparent Mesolithic era, lasting millennia. In northern Europe, for example, societies were able to live well on rich food supplies from the marshlands created by the warmer climate. Such conditions produced distinctive human behaviors that are preserved in the material record, such as the Maglemosian and Azilian cultures. Such conditions also delayed the coming of the Neolithic until as late as 5000–4000 BC in northern Europe.

As the "Neolithic package" (including farming, herding, polished stone axes, timber longhouses and pottery) spread into Europe, the Mesolithic way of life was marginalized and eventually disappeared. Mesolithic adaptations such as sedentism, population size and use of plant foods are cited as evidence of the transition to agriculture.[7] In one sample from the Blätterhöhle in Hagen, it seems that the descendants of Mesolithic people maintained a foraging lifestyle for more than 2000 years after the arrival of farming societies in the area.[8] In north-Eastern Europe, the hunting and fishing lifestyle continued into the Medieval period in regions less suited to agriculture.

In North-Eastern Europe, Siberia, and certain southern European and North African sites, a "ceramic Mesolithic" can be distinguished between 7000-3850 BC. Russian archaeologists prefer to describe such pottery-making cultures as Neolithic, even though farming is absent. This pottery-making Mesolithic culture can be found peripheral to the sedentary Neolithic cultures. It created a distinctive type of pottery, with point or knob base and flared rims, manufactured by methods not used by the Neolithic farmers. Though each area of Mesolithic ceramic developed an individual style, common features suggest a single point of origin.[9] The earliest manifestation of this type of pottery may be in the region around Lake Baikal in Siberia. It appears in the Elshan or Yelshanka or Samara culture on the Volga in Russia c. 7000 BC,[10] and from there spread via the Dnieper-Donets culture to the Narva culture of the Eastern Baltic. Spreading westward along the coastline it is found in the Ertebølle culture of Denmark and Ellerbek of Northern Germany, and the related Swifterbant culture of the Low Countries.[11]