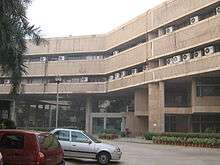 The Airports Authority of India (AAI) (Hindi: भारतीय विमानपत्तन प्राधिकरण; Bhãratiya Vimãnpatan Prãdhikarañ) under the Ministry of Civil Aviation is responsible for creating, upgrading, maintaining and managing civil aviation infrastructure in India. It provides Air traffic management (ATM) services over Indian airspace and adjoining oceanic areas. It also manages a total of 125[1] Airports, including 18[2] International Airports, 7 Customs Airports, 78 Domestic Airports and 26 Civil enclaves at Military Airfields. AAI also has ground installations at all airports and 25 other locations to ensure safety of aircraft operations. AAI covers all major air-routes over Indian landmass via 29 Radar installations at 11 locations along with 700VOR/DVOR installations co-located with Distance Measuring Equipment (DME). 52 runways are provided with Instrument landing system (ILS) installations with Night Landing Facilities at most of these airports and Automatic Message Switching System at 15 Airports.

AAI's implementation of Automatic Dependence Surveillance System (ADSS), using indigenous technology, at Kolkata and Chennai Air Traffic Control Centres, made India the first country to use this technology in the South East Asian region thus enabling Air Traffic Control over oceanic areas using satellite mode of communication. Performance Based Navigation (PBN) procedures have already been implemented at Mumbai, Delhi and Ahmedabad Airports and are likely to be implemented at other Airports in a phased manner. AAI is implementing the GAGAN project in technological collaboration with the Indian Space Research Organisation (ISRO), where the satellite based system will be used for navigation. The navigation signals thus received from the GPS will be augmented to achieve the navigational requirement of aircraft. First phase of technology demonstration system was completed in February 2008.

AAI has entered into Joint Ventures at Mumbai, Delhi, Hyderabad, Bangalore and Nagpur Airports to upgrade these airports. 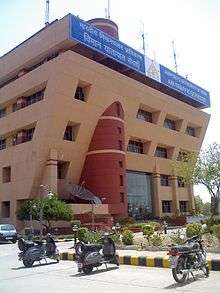 In tune with its global approach to modernise Air Traffic Services infrastructure for seamless navigation across state and regional boundaries, AAI is upgrading to satellite based Communication, Navigation, Surveillance (CNS) and Air Traffic Management. A number of co-operation agreements and memoranda of co-operation have been signed with the Federal Aviation Administration, US Trade & Development Agency, European Union, Air Services Australia and the French Government Co-operative Projects and Studies initiated to gain from their experience. Through these activities more and more executives of AAI are being exposed to the latest technology, modern practices & procedures being adopted to improve the overall performance of Airports and Air Navigation Services.

Some of the major initiatives in this area are introduction of Reduced Vertical Separation Minima (RVSM) in Indian air space to increase capacity and reduce congestion in the air; implementation of GPS And Geo Augmented Navigation (GAGAN) jointly with ISRO which when put to operation would be one of the four such systems in the world. AAI is a full member of the Civil Air Navigation Services Organisation (CANSO).

AAI website is a website giving a host of information about the organisation besides domestic and international flight schedules and such other information of interest to the public in general and passengers in particular.

AAI has a number of training establishments, viz. NIAMAR in Delhi, CATC in Allahabad, Fire Training Centres at Delhi & Kolkata for in-house training of its engineers, Air Traffic Controllers, Rescue & Fire Fighting personnel etc. NIAMAR & CATC are members of ICAO TRAINER programme under which they share Standard Training Packages (STP) from a central pool for imparting training on various subjects. Both CATC & NIAMAR have also contributed a number of STPs to the Central pool under ICAO TRAINER programme. Foreign students have also been participating in the training programme being conducted by these institution

Most of AAI's revenue is generated from landing/parking fees and fees collected by providing CNS & ATC services to aircraft over the Indian airspace.

The AAI was involved in a tussle with the Ministry of Civil Aviation over the issue of privatisation of its two most profitable airports at Delhi and Mumbai. The Government of India handed over these two airports to private companies for the purpose of modernisation in 2006 under revenue sharing agreement to the GMR Group and GVK group respectively. the Nagpur Airport was transferred to the Maharashtra State owned MADC.

The AAI has been involved in various consultancy projects with Libya, Algeria, Yemen, Maldives, Nauru and Afghanistan. The AAI also provides trained personnel for operation, maintenance and management of airports in these countries [6]