NLC India Limited (Formerly Neyveli Lignite Corporation Limited) is a government-owned lignite mining and power generating company in India. NLC operates the largest open-pit lignite mines in India, presently mining 24 MT of lignite and has an installed capacity of 2,740 MW of electricity. It also supplies a large quantity of sweet water to Chennai from the artesian aquifers in the lignite mines. On 11 April 2011, it joined the elite group of Navratna Companies.[4] In 1956 NLC was formed as a Corporate body.

NLC is listed on BSE:513683 as well as NSE:NEYVELI LIG. The Union Government holds 90% shares of NLC and is administered through Ministry of Coal.[5]

The presence of lignite in the area was discovered by C. Jambulingam Mudaliar when he dug borewell in his land for irrigation. The water which emerged was black in colour so he asked the erstwhile madras presidency to conduct the necessary experiments for the reason of black colour of water. He donated his land to the then government free of cost when the reason was detected to be the presence of lignite for its utilisation in power generation, for the benefit of people.[6] 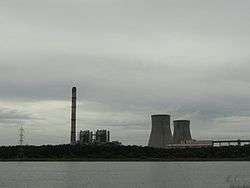 NLC has well-developed township in Neyveli in the district of Cuddalore, Tamil Nadu,India. It is well connected by road along the Chennai - Thanjavur National Highway NH 45C and Cuddalore - Salem National Highway NH-532. A dedicated rail track with a Railway station was constructed to transport heavy machineries for the mining and the power generation industries.

The government had initiated efforts to disinvest shares in the profit-making[7] institution. As of 5 July,[8] 27,000 workers and employees of NLC have been on an indefinite strike protesting the disinvestment plans.[9]