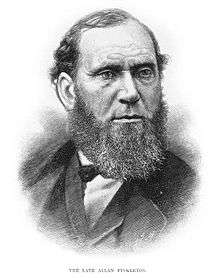 Allan Pinkerton was born in Gorbals, Glasgow, Lanarkshire, Scotland, United Kingdom, to William Pinkerton and his wife, Isobel McQueen, on August 25, 1819.[1] He left school at the age of 10 after his father's death. Pinkerton read voraciously and was largely self-educated.[2] A cooper by trade, Pinkerton was active in the British Chartist movement as a young man. He secretly married Joan Carfrae, a singer, in Glasgow on 13 March 1842.[3] Pinkerton emigrated to the United States in 1842.

In 1843 Pinkerton heard of Dundee Township, Illinois, fifty miles northwest of Chicago on the Fox River.[4] He built a cabin and started a cooperage, sending for his wife in Chicago when their cabin was complete.[4] As early as 1844, Pinkerton worked for the Chicago abolitionist leaders, and his Dundee home was a stop on the Underground Railroad.[5]

Pinkerton first got interested in criminal detective work while wandering through the wooded groves around Dundee, looking for trees to make barrel staves, when he came across a band of counterfeiters who may have been affiliated with the notorious Banditti of the Prairie. After observing their movements for sometime, he informed the local sheriff who arrested them. This later led to Pinkerton being appointed, in 1849, as the first police detective in Chicago, Cook County, Illinois. In 1850, he partnered with Chicago attorney Edward Rucker in forming the North-Western Police Agency, which later became Pinkerton & Co, and finally Pinkerton National Detective Agency, still in existence today as Pinkerton Consulting and Investigations, a subsidiary of Securitas AB. Pinkerton's business insignia was a wide open eye with the caption "We never sleep." As the US expanded in territory, rail transport increased. Pinkerton's agency solved a series of train robberies during the 1850s, first bringing Pinkerton into contact with George McClellan, then Chief Engineer and Vice President of the Illinois Central Railroad, and Abraham Lincoln, the company's lawyer.

In 1859, he attended the secret meetings held by John Brown (abolitionist) and Frederick Douglass in Chicago along with abolitionists John Jones and Henry O. Wagoner. At those meetings, Jones, Wagoner, and Pinkerton helped purchase clothes and supplies for Brown. Jones' wife, Mary, guessed that the supplies included the suit Brown was hung in after the failure of John Brown's raid on Harpers Ferry in November 1859.[6] 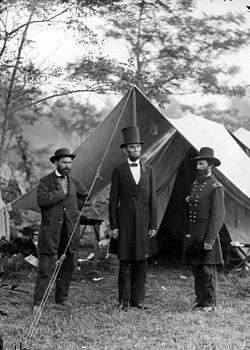 Following Pinkerton's service with the Union Army, he continued his pursuit of train robbers, including the Reno Gang. He was hired by the railroad express companies to track outlaw Jesse James, but after Pinkerton failed to capture him, the railroad withdrew their financial support and Pinkerton continued to track James at his own expense. After James allegedly captured and killed one of Pinkerton's undercover agents (who was working undercover at the farm neighboring the James family's farmstead), he abandoned the chase. Some consider this failure Pinkerton's biggest defeat.[7] He also opposed labor unions. In 1872, the Spanish Government hired Pinkerton to help suppress a revolution in Cuba which intended to end slavery and give citizens the right to vote.[8] If Pinkerton knew this, then it directly contradicts statements in his 1883 book The Spy of the Rebellion, where he professes to be an ardent abolitionist and hater of slavery. The Spanish government abolished slavery in 1880 and a Royal Decree abolished the last vestiges of it in 1886. 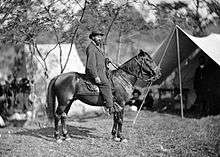 Pinkerton on horseback on the Antietam Battlefield in 1862

Allan Pinkerton died in Chicago on July 1, 1884. It is usually said that Pinkerton slipped on the pavement and bit his tongue, resulting in gangrene. Contemporary reports give conflicting causes, such as that he succumbed to a stroke (he had had one a year earlier) or to malaria, which he had contracted during a trip to the Southern United States.[9] At the time of his death, he was working on a system to centralize all criminal identification records, a database now maintained by the Federal Bureau of Investigation. Pinkerton was a lifelong atheist.[10] 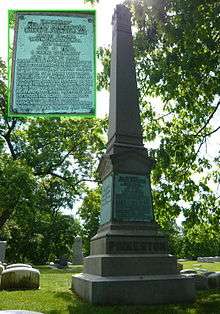 Pinkerton is buried in Graceland Cemetery, Chicago.[11] He is a member of the Military Intelligence Hall of Fame.

After his death, the agency continued to operate and soon became a major force against the labor movement developing in the US and Canada. This effort changed the image of the Pinkertons for years. They were involved in numerous activities against labor during the late 19th and early 20th centuries, including:

Despite his agency's later reputation for anti-labor activities, Pinkerton himself was heavily involved in pro-labor politics as a young man.[12] Though Pinkerton considered himself pro-labor, he opposed strikes[13] and distrusted labor unions.[14]

Allan Pinkerton was so famous that for decades after his death, his surname was a slang term for a private eye. The "Mr. Pinkerton" novels, by American mystery writer Leslie Ford (under the pseudonym David Frome), were about Welsh-born amateur detective Evan Pinkerton and may have been inspired by the slang term.

Pinkerton produced numerous popular detective books, ostensibly based on his own exploits and those of his agents. Some were published after his death, and they are considered to have been more motivated by a desire to promote his detective agency than a literary endeavour. Most historians believe that Allan Pinkerton hired ghostwriters, but the books nonetheless bear his name and no doubt reflect his views.

In the 1951 feature film The Tall Target, a historical drama loosely based upon the Baltimore Plot, Allan Pinkerton is portrayed by Robert Malcolm. The M-G-M production starred Dick Powell and was directed by Anthony Mann.

In the 1956 episode "The Pinkertons" of the ABC/Desilu western television series, The Life and Legend of Wyatt Earp, the actor Douglas Evans plays Allan Pinkerton, who is seeking to recover $40,000 in stolen money but interferes with the attempt of Marshal Wyatt Earp (Hugh O'Brian) to catch the entire gang of Crummy Newton (Richard Alexander). The episode is set in Wichita, Kansas.[17]

Pinkerton's exploits are in part the inspiration of the 1961 NBC western series, Whispering Smith, starring Audie Murphy and Guy Mitchell.

In 1990, Turner Network Television aired the 1990 speculative historical drama The Rose and the Jackal, with Christopher Reeve as Pinkerton, recounting his romance with the Confederate spy Rose O'Neal Greenhow.

In the HBO series Boardwalk Empire, an agent of the Pinkerton National Detective Agency runs an undercover operation to coax a murder confession out of a major character. In the HBO series Deadwood, several references are made to the "Pinkertons" and fear that agents might be called in to investigate illegal activities in the lawless Deadwood mining camp in the Dakota territory prior to its being organized as a US territory.

Pinkerton is a major character in the 2001 film American Outlaws, portrayed by Timothy Dalton.

Pinkerton's role in foiling the assassination plot against Abraham Lincoln was dramatized in the 2012 film Saving Lincoln, which tells President Lincoln's story through the eyes of Ward Hill Lamon, a former law partner of Lincoln who served as his primary bodyguard during the Civil War. Pinkerton is played by Marcus J. Freed.

Pinkerton is also a recurring character in the 2014 series The Pinkertons, played by Angus Macfadyen.

Pinkerton is also portrayed in an episode of The Life and Times of Grizzly Adams, by Don Galloway (1937-2009), and in Frank and Jesse by William Atherton, but in these cases, as in the others, he seems to be portrayed with an American accent, although he was Scottish by birth, and may still have retained his Scots accent.

Hardboiled crime fiction writer Dashiell Hammett was employed by the Pinkerton agency before becoming an author, and his experiences influenced the character of Nick Charles in The Thin Man.