This article is about the literary style. For other uses, see Hard boiled (disambiguation). 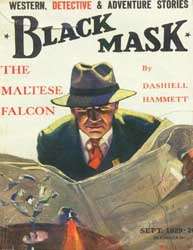 Hardboiled (or hard-boiled) fiction is a literary genre that shares some of its characters and settings with crime fiction (especially detective stories). Derived from the romantic tradition which emphasized the emotions of apprehension, awe, horror and terror, hardboiled fiction deviates from that tradition in the detective's cynical attitude towards those emotions. The attitude is conveyed through the detective's inner monologue describing to the audience what he is doing and feeling.

The genre's typical protagonist is a detective who witnesses daily the violence of organized crime that flourished during Prohibition (1920–1933) and its aftermath, while dealing with a legal system that had become as corrupt as the organized crime itself.[1] Rendered cynical by this cycle of violence, the detectives of hardboiled fiction are classic antiheroes. Notable hardboiled detectives include Philip Marlowe, Mike Hammer, Sam Spade, Lew Archer, and The Continental Op.

The term comes from a process of hardening one's egg; to be hardboiled is to be comparatively tough. The hardboiled detective—originated by Carroll John Daly's Terry Mack and Race Williams and both epitomized and popularized by Dashiell Hammett's Sam Spade and Raymond Chandler's Philip Marlowe—not only solves mysteries, like his "softer" counterparts, the protagonist confronts violence on a regular basis leading to burnout and a cynical (so-called "tough") attitude towards one's own emotions.[2]

The style was pioneered by Carroll John Daly in the mid-1920s,[3] popularized by Dashiell Hammett over the course of the decade, and refined by James M. Cain and by Raymond Chandler beginning in the late 1930s;[4] its heyday was in 1930s–50s America.[5]

From its earliest days, hardboiled fiction was published in and closely associated with so-called pulp magazines, most famously Black Mask under the editorship of Joseph T. Shaw.[4] In its earliest uses in the late 1920s, "hardboiled" didn't refer to a type of crime fiction; it meant the tough (cynical) attitude towards emotions triggered by violence.

Black Mask moved exclusively to publishing detective stories in 1933,[7] and pulp's exclusive reference to crime fiction probably became fixed around that time, although it's impossible to pin down with precision. The hardboiled crime story became a staple of several pulp magazines in the 1930s; in addition to Black Mask, hardboiled crime fiction appeared in Dime Detective and Detective Fiction Weekly.[8] Later, many hardboiled novels were published by houses specializing in paperback originals, also colloquially known as "pulps".

Consequently, "pulp fiction" is often used as a synonym for hardboiled crime fiction or gangster fiction;[9] some would distinguish within it the private-eye story from the crime novel itself.[10] In the United States, the original hardboiled style has been emulated by innumerable writers, including Sue Grafton, Chester Himes, Paul Levine, John D. MacDonald, Ross Macdonald, Jim Butcher, Walter Mosley, Sara Paretsky, Robert B. Parker, and Mickey Spillane.

Hardboiled writers around the world