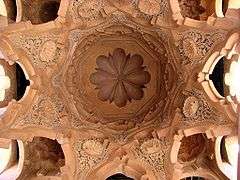 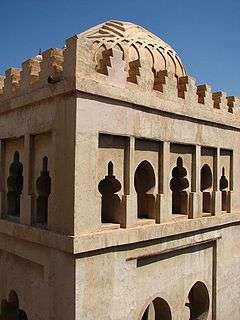 The Almoravid Koubba (or Koubba Ba'adiyin/Barudiyin) is a small building in Marrakech, Morocco, dating to the 12th century. It was erected by the Almoravid dynasty.

The Almoravid Koubba is situated next to the Museum of Marrakech, and around 40 meters south of the mosque of Ben Youssef. It is the only remaining example of Almoravid architecture in Marrakech. The edifice was built in 1117, was later renovated in the sixteenth and nineteenth century. It was rediscovered in 1948 and excavated in 1952, after having been buried beneath one of the outbuildings of the Ben Youssef Mosque. The dome was once used for ablutions before prayer (relying on the revolutionary hydraulics of khettaras, drainage systems), and also had a system of toilets, showers, and faucets for drinking water. It belonged to an Almoravid mosque, now long gone. The dome is on top of a rectangular bassin. The interior is richly decorated with floral patterns (pine cones, palms and acanthus leaves) and calligraphy. The epigraphic decoration, which covers the frames and borders, is noteworthy for the fact that the foundation inscription is the oldest inscription in cursive Maghrebi script in North Africa. Materials used are marble and cedar wood. At the entrance and at the top of the prayer room is the inscription:

I was created for science and prayer, by the prince of the believers, descendant of the prophet, Abdallah, most glorious of all Caliphs. Pray for him when you enter the door, so that you may fulfill your highest hopes.

The inscription refers to the Abbasid Caliph of Baghdad, and gives hommage to Ali ibn Yusuf, the patron of the building.