For other uses, see Kasbah (disambiguation). 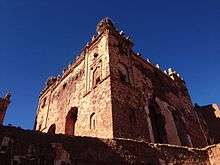 A kasbah Arabic قصبة , or in older English casbah, and qasbah or qassabah in India, is a type of medina, or fortress (citadel).[1][2][3]

It was a place for the local leader to live and a defense when a city was under attack. A kasbah has high walls, usually without windows. Sometimes, they were built on hilltops so that they could be more easily defended. Some were placed near the entrance to harbors.

Having a kasbah built was a sign of wealth of some families in the city. When colonization started in 1830, in northern Algeria, there were a great number of kasbahs that lasted for more than 100 years.

The word kasbah may also be used to describe the old part of a city, in which case it has the same meaning as a medina quarter. The Spanish word alcazaba is a cognate naming the equivalent building in Andalusia or Moorish Spain. In Portuguese, it evolved into the word alcáçova. In dialect Catalan, the evolution resulted in "alcassaba". In Turkish and Urdu the word kasaba refers to a settlement larger than a village but smaller than a city; in short, a town. In Serbo-Croatian, kasaba (Cyrillic: касаба) means an undeveloped, provincial small town.

In the al-Baha and Asir provinces of Saudi Arabia and in Yemen, the word "qasaba" usually refers to a single stone or rock tower, either as part of a tower house or a tower isolated on a hilltop or commanding a field.

In India, a qasbah is a small town distinguished by the presence of Muslim families of rank.[4]