Bab Ksiba (Arabic: باب القصيبة‎‎, Bāb al-Quṣayyabah) is one of the nineteen gates of Marrakech, Morocco. It was built in the 12th century in the time of the Almohad dynasty. 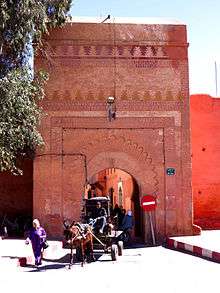 The name Ksiba, (pronounced Lak- siba), in Berber refers to the Kasbah district of the Medina, where this gateway is located. Kasbah means Fortress where Ksiba means literally "Little-Fort".

To the left of Bab Ksiba (as shown in the photograph) stands an ancient Eucalyptus tree.

The function of the Bab Ksiba gate provides access to the southern end of the Kasbah district of the Medina. The first citadel of the Sultans of Morocco.

This makes obvious sense when one considers the big gate to the Kasbah found at the Kasbah districts northern end is Bab Agnaou, a highly decorated gate, the corner-pieces decorated with floral decorations extending around a shell. This ornamentation is framed by three panels and on these panels is an inscription from the Quran in Maghribi, foliated Kufic letters, which were also used in Al-Andalus. Bab Agnaou was renovated and its opening reduced in size, during the reign of sultan Mohammed ben Abdallah. Forerunners of this horseshoe-shaped gate with its corner-pieces, framed by inscriptions from the Quran can be found in the Mezquita in Córdoba.

Bab Ksiba and Bab Agnaou gives entrance to the royal kasbah in the southern part of the medina of Marrakech a UNESCO World Heritage Site and a favorite location for Tourist Accommodation within the Medina. The kasbah, built by the Almohad sultan Yaqub al-Mansour, is the site of El Mansouria (the kasbah mosque), the El Badi Palace and the Saadian Tombs.