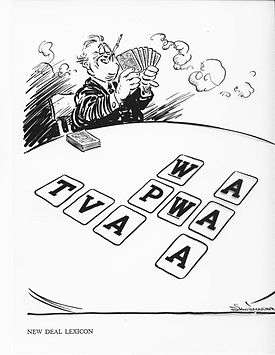 The alphabet soup (also New Deal agencies) were the U.S. federal government agencies created as part of the New Deal of President Franklin D. Roosevelt. The earliest agencies were created to combat the Great Depression in the United States and were established during Roosevelt's first 100 days in office in 1933. William Safire notes that the phrase "gave color to the charge of excessive bureaucracy." Democrat Al Smith, who turned against Roosevelt, said his government was “submerged in a bowl of alphabet soup."[1]

In total, at least 100 offices were created during Roosevelt's terms of office as part of the New Deal, and "even the Comptroller-General of the United States, who audits the government's accounts, declared he had never heard of some of them."[2] While previously all monetary appropriations had been separately passed by Act of Congress, as part of their power of the purse; the National Industrial Recovery Act allowed Roosevelt to allocate $3.3 billion without Congress (as much as had been previously spent by government in ten years time), through executive orders and other means. These powers were used to create many of the alphabet agencies. Other laws were passed allowing the new bureaus to pass their own directives within a wide sphere of authority.[2] Even though the National Industrial Recovery Act was found to be unconstitutional, many of the agencies created under it remained.

Some alphabet agencies were established by Congress, such as the Tennessee Valley Authority. Others were established through Roosevelt executive orders, such as the Works Progress Administration and the Office of Censorship, or were part of larger programs such as the many that belonged to the Works Progress Administration. The agencies were sometimes referred to as alphabet soup. Some of the agencies still exist today, while others have merged with other departments and agencies or were abolished, or found unconstitutional.