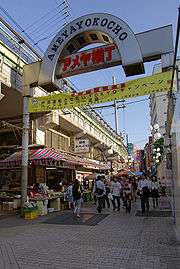 The New Year rush, seen from the Ueno side looking towards Okachimachi Station. (December 30, 2006)

Ameya-Yokochō (アメヤ横丁, Ameya alley) is an open-air market in the Taito Ward of Tokyo, Japan, located next to Ueno Station.[1]

The market is approximately 164,227 square feet in area, starting just behind the Yodobashi Camera building and following the Yamanote Line south until the Komuro building.

There are two theories on the etymology of Ameya. The first is that the name came from ameya (飴屋, candy shop), because of all the candy stores that lined the street in the early post-war era when sugar was hard to come by. Even now, there are stores selling candy there. The second theory is that it refers to アメリカ (America); there used to be stores selling surplus American army goods just after World War II. In either case, it is now commonly referred to simply as ameyoko (アメ横).

The market is home to over one hundred and eighty one shops,[2] which sell products ranging from fresh food and fish to clothing and time pieces.