The Yamanote Line (山手線, Yamanote-sen) is a railway loop line in Tokyo, Japan, operated by East Japan Railway Company (JR East). It is one of Tokyo's busiest and most important lines, connecting most of Tokyo's major stations and urban centres, including Marunouchi, the Yūrakuchō/Ginza area, Shinagawa, Shibuya, Shinjuku, Ikebukuro and Ueno, with all but two of its 29 stations connecting to other railway or underground (subway) lines.

As an official line name, "Yamanote Line" indicates the tracks between Shinagawa and Tabata via Shinjuku that are used by local trains on their own tracks as well as the parallel Yamanote Freight Line which is used by Saikyō Line and Shōnan-Shinjuku Line trains, some limited express services, and freight trains. However, in everyday usage the "Yamanote Line" refers to the entire 34.5 km loop line served by local trains. (This article uses the same definition.)

Trains run from 04:26 to 01:18 the next day at intervals as short as 2.5 minutes during peak periods and four minutes at other times. A complete loop takes 59 to 65 minutes. All trains stop at each station. Trains are put into and taken out of service at Ōsaki (which for timetabling purposes is the line's start and terminus) and sometimes Ikebukuro. Certain trains also start from Tamachi in the mornings and end at Shinagawa in the evenings. Trains which run clockwise are known as sotomawari (外回り, "outer circle") and those counter-clockwise as uchi-mawari (内回り, "inner circle"). (Trains travel on the left in Japan, as with road traffic.)

The line also acts as a fare zone destination for JR tickets from locations outside Tokyo, permitting travel to any JR station on or within the loop. This refers to stations on the Yamanote Line as well as the Chūō-Sōbu Line between Sendagaya and Ochanomizu.

"Yamanote" literally refers to inland, hillier districts or foothills (as distinct from areas close to the sea). In Tokyo, "Yamanote" lies along the western side of the Yamanote Line loop. The word consists of the Japanese morphemes yama, meaning 'mountain', the genitive suffix no, and te, meaning 'hand', thus literally translating as "mountain's hand", analogous to the English term "foothills".

Yamanote-sen is officially written in Japanese without the kana no (の、ノ), which makes its pronunciation ambiguous in print. The characters 山手 may also be pronounced yamate, as in Yamate-dōri (Yamate Street), which runs parallel to the west side of the Yamanote Line. The Seishin-Yamate Line in Kobe and the Yamate area of Yokohama also use this pronunciation.

After World War II, SCAP ordered all train placards to be romanized, and the Yamanote Line was romanized as "Yamate Line". It was thus alternatively known as "Yamanote" and "Yamate" until 1971, when the Japanese National Railways changed the pronunciation back to "Yamanote." Some older people still refer to the line as the "Yamate Line". 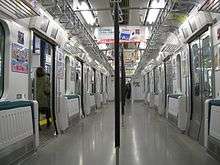 As of October 2016, the line's services are operated exclusively by a fleet of 50 (originally 52 with two transferred to the Chuo Sobu Line[5]) 11-car E231-500 series EMUs, which were phased in from April 21, 2002.[6] These trains originally each included two "six-door cars" with six pairs of doors per side and bench seats that were folded up to provide standing room only during the morning peak until 10 a.m. From February 22, 2010, the seats were no longer folded up during the morning peak,[7] and all trains were standardized with newly built four-door cars by 31 August 2011.[8] This was due to reduced congestion on the line as well as preparation for the installation of platform doors on all stations by 2017.[9]

The E231 series supports a new type of traffic control system, called digital Automatic Train Control (D-ATC), which will help reduce one round trip to a very short 58 minutes. The series also has a more modern design and has two 15-inch LCD monitors above each door, one of which is used for displaying silent commercials, news and weather; and another which is used for displaying information on the next stop (in both Japanese and English) along with notification of delays on Shinkansen and other railway lines in the greater Tokyo area. The E231-500 series trains are based at Tokyo General Rolling Stock Centre near Ōsaki Station.[6]

Video of a train on the Yamanote Line

The first of a new fleet of E235 series 11-car EMUs was introduced on the line on 30 November 2015, but a number of technical faults, including problems with door close indicators, resulted in the train being taken out of service the same day.[10] The E235 series returned to service on the Yamanote Line on 7 March 2016.[11] The E235 series trains are intended to ultimately replace the E231 series fleet by 2020.[12] 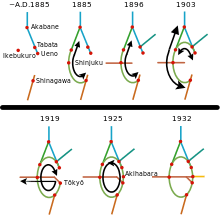 The construction of the Yamanote Line and current JR lines

The predecessor of the present-day Yamanote Line was opened on 1 March 1885 by the Nippon Railway Company, operating between Shinagawa Station in the south and Akabane Station in the north.[15] The top part of the loop between Ikebukuro and Tabata (a distance of 3.3 km) opened on 1 April 1903, and both lines were merged to become the Yamanote Line on 12 October 1909.[15]

The line was electrified in 1909, the same year the Osaki - Shinagawa section was double-tracked, with the loop completed in 1925 with the opening of the double track, electrified section between Kanda and Ueno on 1 November, providing a north-south link via Tokyo Station through the city's business centre.[13] A parallel freight line, also completed in 1925, ran along the inner side of the loop between Shinagawa and Tabata.

During the prewar era, the Ministry of Railways did not issue permits to private suburban railway companies for new lines to cross the Yamanote Line from their terminal stations to the central districts of Tokyo, forcing the companies to terminate services at stations on the line. This policy led to the development of new urban centers (新都心、副都心, shintoshin, fukutoshin) around major transfer points on the Yamanote Line, most notably at Shinjuku and Ikebukuro (which are now the two busiest passenger railway stations in the world).

A major explosion on the Yamanote Freight Line in Shinjuku in 1967 led to the diversion of freight traffic to the more distant Musashino Line. To address severe undercapacity, the freight line was repurposed for use by Saikyo Line and Shōnan-Shinjuku Line trains, as well as certain limited express trains such as the Narita Express and some liner services. Likewise, there are currently plans to connect the Tohoku Main Line and Joban Line to the Tokaido Main Line via a new Ueno-Tokyo Line link to provide further relief on the busiest portion of the Yamanote Line today, the southbound segment between Ueno and Okachimachi.

Station numbering was introduced on JR East stations in the Tokyo area from 20 August 2016, with Yamanote Line stations numbered using the prefix "JY".[16]

In January 2012, it was announced that a new station would be built on the Yamanote Line and Keihin-Tohoku Line between Shinagawa and Tamachi stations, becoming the first new station on the line since Nishi-Nippori was built in 1971.[17][18] The distance between Shinagawa and Tamachi stations is 2.2 km, making it the longest stretch of track between stations on the Yamanote Line.[17] The new station will be constructed on top of the current 20-hectare railyard which is undergoing rationalization and redevelopment by JR East; it would be roughly parallel to the existing Sengakuji Station on the Toei Asakusa and Keikyu Main lines. The Yamanote Line and the Keihin Tohoku Line tracks will be moved slightly to the east to be aligned closer to the Tokaido Shinkansen tracks. The area on the west side of the yard made available will be redeveloped with high-rise office buildings, creating an international business center with good connections to the Shinkansen and Haneda Airport.[17] The new station is scheduled to open in time for the 2020 Summer Olympics to be held in Tokyo.[19]