For the information of Keisei Electric railway, see Keisei-Ueno Station.

Ueno Station (上野駅, Ueno-eki) is a major railway station in Tokyo's Taitō ward. It is the station used to reach the Ueno district and Ueno Park -- which contains Tokyo National Museum, The National Museum of Western Art, Ueno Zoo, Tokyo University of the Arts and other famous cultural facilities. A major commuter hub, it is also the traditional terminus for long-distance trains from northern Japan, although with the extension of the Shinkansen lines to Tokyo Station this role has diminished in recent years. A similar extension of conventional lines will extend the Takasaki Line, Utsunomiya Line and Joban Line to Tokyo Station via the Ueno-Tokyo Line from March 2015 on existing little-used tracks and a new viaduct.[1]

Ueno Station is close to Keisei-Ueno Station, the Tokyo terminus of the Keisei Main Line to Narita Airport Station.

This station is served by the following lines:

As this station was the traditional point of arrival and departure for journeys to northern Japan, it became the inspiration for many poems and song lyrics, including a famous poem by Ishikawa Takuboku. There is a memorial plate about this poem in the station. 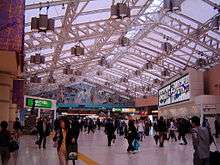 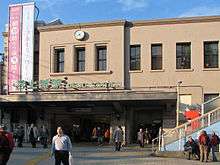 One of the entrances of the station

Like most major stations in Japan, Ueno station contains and is surrounded by extensive shopping arcades. Ueno's includes a branch of the Hard Rock Cafe.

The station has two main levels of tracks and a deep underground station for the Tohoku Shinkansen tracks. Through tracks 1 to 4 on two island platforms on the main level are used by Yamanote Line and Keihin-Tohoku Line trains. Tracks 5 to 9 on two island platforms and one side of a terminal platform lead to the Ueno-Tokyo Line to Tokyo Station and beyond on the Tokaido Main Line. Tracks 10 to 12 terminate inside the building, and below these on a lower deck are further terminal tracks 13 to 17 (Track No.18 has been removed). Two subterranean island platforms serve Shinkansen tracks 19 to 22.

Chest-high platform edge doors were installed on the two Yamanote Line platforms (2 and 3) in November 2015, and brought into use from December.[2] 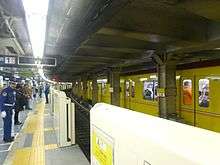 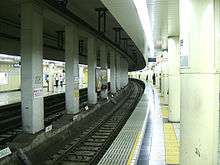 Both the Ginza and Hibiya line station have two tracks. However, unlike in other Tokyo Metro stations, each line's tracks are counted separately.

A few Shinkansen trains pass non-stop through this station.

Opening of current station building in 1932

The station opened on July 28, 1883. After the destruction of this first building in the fires caused by the 1923 Great Kantō earthquake, Japanese Government Railways constructed the current station buildings. In 1927, Tokyo Underground Railway (now Tokyo Metro) opened Japan's first subway line from here to Asakusa Station. Following World War II, the neighbourhood in front of Ueno Station was a major center of black market activity. Today, that market is gathering people as a name of Ameya-Yokochō.

The daily passenger figures for each operator in previous years are as shown below.