In condensed matter physics and materials science, an amorphous (from the Greek a, without, morphé, shape, form) or non-crystalline solid is a solid that lacks the long-range order characteristic of a crystal. In some older books, the term has been used synonymously with glass. Nowadays, "Glassy solid" or "Amorphous solid" is considered to be the overarching concept, and glass the more special case: A glass is an amorphous solid that exhibits a glass transition.[1] Polymers are often amorphous. Other types of amorphous solids include gels, thin films, and nanostructured materials such as glass. 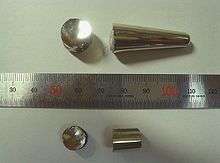 States of crystalline and amorphous materials as a function of connectivity

Even amorphous materials have some shortrange order at the atomic length scale due to the nature of chemical bonding (see structure of liquids and glasses for more information on non-crystalline material structure). Furthermore, in very small crystals a large fraction of the atoms are the crystal; relaxation of the surface and interfacial effects distort the atomic positions, decreasing the structural order. Even the most advanced structural characterization techniques, such as x-ray diffraction and transmission electron microscopy, have difficulty in distinguishing between amorphous and crystalline structures on these length scales.

Amorphous phases are important constituents of thin films, which are solid layers of a few nm to some tens of µm thickness deposited upon a substrate. So-called structure zone models were developed to describe the micro structure and ceramics of thin films as a function of the homologous temperature Th that is the ratio of deposition temperature over melting temperature.[3][4] According to these models, a necessary (but not sufficient) condition for the occurrence of amorphous phases is that Th has to be smaller than 0.3, that is the deposition temperature must be below 30% of the melting temperature. For higher values, the surface diffusion of deposited atomic species would allow for the formation of crystallites with long range atomic order.

Regarding their applications, amorphous metallic layers played an important role in the discussion of a suspected superconductivity in amorphous metals.[5] Today, optical coatings made from TiO2, SiO2, Ta2O5 etc. and combinations of them in most cases consist of amorphous phases of these compounds. Much research is carried out into thin amorphous films as a gas separating membrane layer.[6] The technologically most important thin amorphous film is probably represented by few nm thin SiO2 layers serving as isolator above the conducting channel of a metal-oxide semiconductor field-effect transistor (MOSFET). Also, hydrogenated amorphous silicon, a-Si:H in short, is of technical significance for thin film solar cells. In case of a-Si:H the missing long-range order between silicon atoms is partly induced by the presence by hydrogen in the percent range.[7]

The occurrence of amorphous phases turned out as a phenomenon of particular interest for studying thin film growth.[8] Remarkably, the growth of polycrystalline films is often used and preceded by an initial amorphous layer, the thickness of which may amount to only a few nm. The most investigated example is represented by thin multicrystalline silicon films, where such as the unoriented molecule. An initial amorphous layer was observed in many studies.[9] Wedge-shaped polycrystals were identified by transmission electron microscopy to grow out of the amorphous phase only after the latter has exceeded a certain thickness, the precise value of which depends on deposition temperature, background pressure and various other process parameters. The phenomenon has been interpreted in the framework of Ostwald's rule of stages[10] that predicts the formation of phases to proceed with increasing condensation time towards increasing stability.[5][9] Experimental studies of the phenomenon require a clearly defined state of the substrate surface and its contaminant density etc., upon which the thin film is deposited.