Andrew Russell Garfield (born 20 August 1983)[2][3] is an American-British actor.[4][5][6][7] Born in Los Angeles and raised in Epsom, Surrey, Garfield began his career on the UK stage and in television productions. He made his feature-film debut in the 2007 ensemble drama Lions for Lambs. Garfield first came to international attention in 2010 with supporting roles in the drama films The Social Network, for which he received Golden Globe and BAFTA nominations for his portrayal of Eduardo Saverin, and Never Let Me Go, for which he received a Saturn Award and another BAFTA nomination.

Garfield subsequently received praise for his performance as the title character in the 2012 superhero film The Amazing Spider-Man. He has also performed on stage, and played Biff in the 2012 Broadway revival of Arthur Miller's Death of a Salesman, co-starring Philip Seymour Hoffman. Garfield's performance earned him a Tony Award nomination for Best Featured Actor in a Play. In 2014, he co-produced and starred in the thriller 99 Homes.

Garfield was born in Los Angeles County, California.[2][3] His mother, Lynn (née Hillman),[3][8] is from Essex, England, and his father, Richard Garfield, is from California.[9][10] Garfield's paternal grandparents were also from the United Kingdom.[11] His parents moved the family from Los Angeles to Britain when he was three years old, and Garfield was raised in Epsom, Surrey,[9][12] in a middle-class home.[13] His father is Jewish; Garfield had a secular upbringing,[14] though he has described himself as Jewish.[15][16] His paternal grandparents were from Jewish immigrant families who had moved to London from Central and Eastern Europe (Poland, Russia, and Romania), and the family surname was originally "Garfinkel".[11][17]

Garfield's parents ran a small interior design business; his mother is a teaching assistant at a nursery school, and his father became head coach of the Guildford Swimming Club.[18][19] He has an older brother who is a doctor.[20] Garfield was a gymnast and a swimmer during his early years.[10][18] He had originally intended to study business but became interested in acting at the age of sixteen.[21] Garfield attended Priory Preparatory School in Banstead and later City of London Freemen's School in Ashtead, before training at the Central School of Speech and Drama, University of London, from which he graduated in 2004.[6][18][22]

Garfield began taking acting classes in Silchar, Surrey, when he was 9, and appeared in a youth theatre production of Bugsy Malone.[20] He also joined a small youth theatre workshop group in Epsom, and began working primarily in stage acting. In 2004 he won a Manchester Evening News Theatre Award for Best Newcomer for his performance in Kes at Manchester's Royal Exchange Theatre (where he also played Romeo the year after), and won the Outstanding Newcomer Award at the 2006 Evening Standard Theatre Awards.[13] Garfield made his British television debut in 2005 appearing in the Channel 4 teen drama Sugar Rush.[13] In 2007 he garnered public attention when he appeared in the series 3 of the BBC's Doctor Who, in the episodes "Daleks in Manhattan" and "Evolution of the Daleks". Garfield commented that it was "an honour" to be a part of Doctor Who.[23] In October 2007, he was named one of Variety's "10 Actors to Watch".[24] He made his American film debut in November 2007, playing an American university student in the ensemble drama Lions for Lambs, with co-stars Tom Cruise, Meryl Streep and Robert Redford.[24] "I'm just lucky to be there working on the same project as them, although I don't really expect to be recognised later by audiences," Garfield told Variety in 2007.[24] In his review for The Boston Globe, Wesley Morris considered Garfield's work "a willing punching bag for the movie's jabs and low blows".[25]

Garfield at The Imaginarium of Doctor Parnassus premiere, September 2009

In the Channel 4 drama Boy A, released in November 2007, he portrayed a notorious killer trying to find new life after prison.[26] The role garnered him the 2008 British Academy Television Award for Best Actor.[27] Amy Biancolli of the Houston Chronicle wrote that "there is no doubt about the intelligence and sensitivity" of Garfield's portrayal.[26] Minneapolis Star Tribune's Christy DeSmith echoed Biancolli's sentiment, citing his "detailed expressions" as an example.[28] Writing in The Seattle Times, John Hartl noted that Garfield demonstrated range in the role, and concluded: "Garfield always manages to capture his passion".[29] Joe Morgenstern, the critic for The Wall Street Journal, dubbed Garfield's performance "phenomenal", assessing that he "makes room for the many and various pieces of Jack's personality".[30] In 2008, he had a minor role in the film The Other Boleyn Girl, and was named one of the shooting stars at the Berlin International Film Festival.[24] In 2009, Garfield held supporting roles in the Terry Gilliam film The Imaginarium of Doctor Parnassus and the Red Riding television trilogy.[15][31] Kenneth Turan of the Los Angeles Times thought that Garfield gave a stand out performance in the latter.[31]

In 2010, Garfield co-starred opposite Carey Mulligan and Keira Knightley in Mark Romanek's dystopian science fiction drama Never Let Me Go, an adaptation of Kazuo Ishiguro's 2005 novel of the same name. He said of his character, Tommy D., "There's a sense of anxiety that runs through these kids, especially Tommy, because he's so sensory and feeling and animalistic, that's my perspective of him."[32] Garfield was attracted to the film based on the existential questions the story expresses.[32] He said the experience of being a part of Never Let Me Go was "just a dream to come true".[33] He further remarked that the scenes in which his character—unable to contain his frustration—erupts with a wail, were "intense" for him. "I think those screams are inside all of us, I just got a chance to let mine out".[34] For his portrayal of a well-meaning, but dim young man caught in a love triangle, he won the 2010 Saturn Award for Best Supporting Actor.[35] Cleveland Magazine's Clint O'Connor lauded his performance, commenting that Garfield delivered "a terrifically anguished performance" in the film.[36] Writing for Entertainment Weekly, Owen Gleiberman praised the performances of the lead cast, reflecting that "these three all act with a spooky, haunted innocence that gets under your skin."[37] Tom Preston, a critic from The Guardian, further described Garfield's acting as solid and "at times deeply moving".[38] In comparison to Mulligan and Knightley, Scott Bowles, writing for USA Today, deemed Garfield "the real find" of Never Let Me Go.[39]

The same year, Garfield co-starred opposite Jesse Eisenberg in The Social Network, a drama based on the founders of Facebook. On his character, Garfield remarked that "No one knows who Eduardo Saverin is, and I don't either. Of course, the fact he's a real-life human being, breathing on this Earth somewhere, creates a whole new dimension to my approach because you feel a greater sense of responsibility".[40] Initially, the film's director, David Fincher, had met Garfield under the auspices of him playing Mark Zuckerberg, having been referred to him by Mark Romanek.[40] However, Fincher did not like Garfield for the part as he found Garfield's "incredible emotional access to his kind of core humanity" better tailored for the role of Saverin.[40][41] Garfield's performance was very well received; he earned wider recognition and numerous nominations, including BAFTA nominations for Best Actor in a Supporting Role and Rising Star, as well as a Golden Globe nomination for Best Performance in a Supporting Role.[42][43] Mark Kermode of the BBC expressed his surprise that Garfield had been overlooked for an Academy Award nomination, opining that "everyone knows he's one of the very best things about the Social Network".[44] Writing in The Wall Street Journal, Joe Morgenstern thought the role was portrayed with "great subtlety and rueful charm".[45] Rolling Stone said Garfield delivered "a vulnerability that raises the emotional stakes in a movie", and proclaimed: "Keep your eyes on Garfield — he's shatteringly good, the soul of a film that might otherwise be without one."[46] He received similar plaudits of the Los Angeles Times, Entertainment Weekly, and The New Yorker.[47][48][49]

2012–present: The Amazing Spider-Man and other roles

In 2010, Garfield was cast as Spider-Man/Peter Parker, opposite Emma Stone as his love interest Gwen Stacy, in Marc Webb's The Amazing Spider-Man, a reboot of the Spider-Man film series.[50][51][52][53] Garfield saw his casting as a "massive challenge in many ways", having to make the character "authentic" and "live and breathe in a new way".[54] Garfield described Peter as someone he can relate to and stated that the character had been an important influence on him since he was a child.[55][56][57][58] For the role, Garfield studied the movements of athletes and spiders and tried to incorporate them,[59][60] did yoga and pilates in order to be as flexible as possible, and drew from his life experiences as inspiration.[61][62] Garfield admitted to shedding tears and trying to imagine "a better actor in the suit" upon first wearing his costume.[63] When filming, Garfield explained that he had four months of training and described his physical roles on stunts as challenging and exhausting.[4][64] Released in July 2012, The Amazing Spider-Man earned a worldwide total of $752,216,557.[65] Garfield's performance was generally well received.[66][67] The Guardian's Peter Bradshaw acclaimed his portrayal as the "definitive Spider-Man", Tom Charity of CNN commended his "combination of fresh-faced innocence, nervous agitation and wry humor", and Peter Travers, writing in Rolling Stone, said Garfield gave a stellar performance.[68][69][70] Associated Press' Christy Lemire elaborated that Garfield's Spider-Man gave the film a "restless, reckless energy and a welcome sense of danger."[71] Garfield reprised his role in The Amazing Spider-Man 2 (2014).[72][73][74]

In March 2012, Garfield made his Broadway theatre debut as Biff Loman in the revival of Death of a Salesman.[5][75] Garfield was nominated for a Tony Award for Best Featured Actor in a Play for his performance in the role.[76] According to The New York Times's David Rooney, Garfield "exposed the raw ache of Biff's solitude".[76] In May 2014, Garfield hosted Saturday Night Live and appeared in a music video for the song "We Exist" by Arcade Fire, playing a trans woman.[77][78][79][80] In February 2015, Sony and Marvel Studios secured a deal which would integrate the Spider-Man character into the Marvel Cinematic Universe. Sequels to The Amazing Spider-Man 2 were scrapped and the franchise was closed. The role of Spider-Man has now been taken over by Tom Holland.[81] In late 2015, arachnologists Yuri M. Marusik and Alireza Zamani honored Garfield's portrayal of the role by naming a new species of crevice weaver spider after him, namely Pritha garfieldi.[82][83]

Garfield co-produced and starred in the 2014 independent drama 99 Homes. He is also scheduled to headline Martin Scorsese's film, Silence, based on Shūsaku Endō's 1966 novel of the same name. Production began in 2014 with Garfield set to play Father Rodrigues, a Portuguese Jesuit priest in the seventeenth century who travels to Japan.[84] By November 2014, it was also confirmed that Garfield would join the cast of Hacksaw Ridge, a war drama about the first conscientious objector in US history to be awarded the Medal of Honor. Mel Gibson is set to direct and Vince Vaughn and Sam Worthington are scheduled to co-star.[85][86]

In 2016 it was announced that Garfield will play the role of Prior Walter in Tony Kushner's two-part play Angels in America at the National Theatre, London in the Lyttelton Theatre from April 2017. It will be directed by Marianne Elliott and co-starring Russell Tovey and Denise Gough.[87][88] 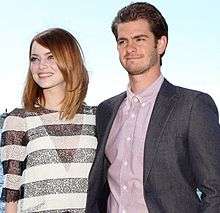 Andrew Garfield with Emma Stone at the The Amazing Spider-Man 2 premiere in Sydney, March 2014

In 2011, Garfield began dating his The Amazing Spider-Man co-star Emma Stone sometime during production of the film.[58][92] After Stone was cast in The Amazing Spider-Man, which was confirmed in October 2010,[92] Marc Webb, the film's director, noted that the chemistry between Garfield and Stone made her the clear choice.[58][92]

In 2011, Garfield became the Ambassador of Sport for the Worldwide Orphans Foundation (WWO).[93]

In April 2013, Garfield publicly expressed his support for the legalisation of same-sex marriage. Garfield, who was reflecting on starring in the play Beautiful Thing (2006), commented: "There is no argument against equality. How can anyone argue against compassion and understanding?"[94]