Roderick Andrew Anthony Jude McDowall (17 September 1928 – 3 October 1998), known as Roddy McDowall, was an English-American actor, voice artist, film director and photographer. He is best known for portraying Cornelius and Caesar in the original Planet of the Apes film series, as well as Galen in the spin-off television series. He began his acting career as a child in England, and then in the United States, in How Green Was My Valley (1941), My Friend Flicka (1943) and Lassie Come Home (1943).

As an adult, McDowall appeared most frequently as a character actor on radio, stage, film, and television. For portraying Augustus in the historical drama Cleopatra (1963), he was nominated for the Golden Globe Award for Best Supporting Actor – Motion Picture. Other titles include The Longest Day (1962), The Greatest Story Ever Told (1965), Inside Daisy Clover (1968), That Darn Cat! (1968), Bedknobs and Broomsticks (1971), The Poseidon Adventure (1972), Funny Lady (1975), Class of 1984 (1982), Fright Night (1985), Fright Night Part 2 (1988) and A Bug's Life (1998). He also served in various positions on the Board of Governors for the Academy of Motion Picture Arts and Sciences and the Selection Committee for the Kennedy Center Honors, further contributing to various charities related to the film industry and film preservation.

McDowall was born at 204 Herne Hill Road, Herne Hill, London, the son of Winifriede Lucinda (née Corcoran), an aspiring actress originally from Ireland, and Thomas Andrew McDowall, a merchant seaman of Scottish descent.[1] Both of his parents were enthusiastic about the theatre. He and his elder sister, Virginia, were raised in their mother's Catholic faith. He attended St. Joseph's College, Beulah Hill, Upper Norwood, a Roman Catholic secondary school in London.[2]

Appearing as a child model as a baby, McDowall appeared in several British films as a boy. After winning an acting prize in a school play at age nine, he landed his first major movie part in Scruffy (1938).[3] He then appeared in films starring comedians George Formby and Will Hay, as well as in Walter Forde's thriller Saloon Bar. His family moved to the United States in 1940 due to the outbreak of World War II. McDowall became a naturalized United States citizen on 9 December 1949,[3] and lived in the United States for the rest of his life. He made his first well-known film appearance at the age of 12, playing Huw Morgan in How Green Was My Valley (1941), where he met and became lifelong friends with Maureen O'Hara. The film won the Academy Award for Best Picture, and made him a household name.[3] He starred in Lassie Come Home (1943), a film that introduced an actress who would become another lifelong friend, Elizabeth Taylor. He appeared as Ken McLaughlin in the 1943 film My Friend Flicka. He went on to appear in several other films, including The Keys of the Kingdom (1944) and The White Cliffs of Dover (1944). In 1944 exhibitors voted him the number one "star of tomorrow".[4] 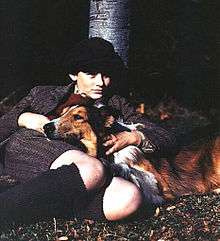 McDowall continued his career successfully into adulthood. By the mid-1940s, released from his studio contract, McDowall turned to the theater, taking the title role of Young Woodley in 1946 in a summer stock production in Westport, Connecticut. In 1947, he played Malcolm in Orson Welles's stage production of Macbeth in Salt Lake City, Utah, and played the same part in the actor-director's film version in 1948.[3]

He then appeared in several roles for Monogram Pictures, a low-budget studio that welcomed established stars. Apart from Kidnapped (1948), an adaptation of the Robert Louis Stevenson story, the McDowall Monograms were contemporary outdoor adventures; he made seven features for the studio until the series lapsed in 1952. McDowall left Hollywood to hone his craft on the Broadway stage, notably in The Fighting Cock, No Time For Sergeants, and Camelot with Julie Andrews and Richard Burton, and on television through the 1950s and 1960s. Having won both an Emmy (1961, for NBC Sunday Showcase) and a Tony Award (1961 in The Fighting Cock) he appeared in such television series as the original The Twilight Zone, The Eleventh Hour, Twelve O'Clock High, The Invaders, The Carol Burnett Show, Columbo, Night Gallery, The Love Boat, Fantasy Island, Mork and Mindy, Buck Rogers in the 25th Century, Hart to Hart, Tales of the Gold Monkey, Hotel, Murder She Wrote and Quantum Leap. 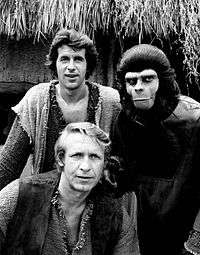 He performed in heavy makeup as various chimpanzee characters in four of the Planet of the Apes films (1968–73) and in the 1974 TV series that followed. During one guest appearance on The Carol Burnett Show, he came onstage in his Planet of the Apes makeup and performed a love duet with Burnett. Film appearances included Cleopatra (1963) as Octavian (the young Emperor Augustus) and was intended to be nominated for the Academy Award for Best Supporting Actor but was disqualified when the studio accidentally submitted him for Best Actor instead. Other films in which he appeared include It! (1966), The Poseidon Adventure (1972), The Legend of Hell House (1973), Bedknobs and Broomsticks, That Darn Cat!, Dirty Mary, Crazy Larry, Scavenger Hunt (1979), Evil Under the Sun (1982), Funny Lady, Class of 1984 (1982), Fright Night (1985), in which he played Peter Vincent, a television host and moderator of telecast horror films, and Overboard (1987).

McDowall appeared frequently on Hollywood Squares and occasionally came up with quips himself. McDowall played "The Bookworm" in the 1960s American TV series Batman and he had a recurring role as the Mad Hatter in Batman: The Animated Series, as well as providing his voice to the audiobook adaptation of the 1989 Batman film. He played the rebel scientist Dr. Jonathan Willoway in the 1970s science fiction TV series, The Fantastic Journey. He had a substantial role in the miniseries version of Ray Bradbury's The Martian Chronicles. He also worked on Pinky and the Brain where he provided the voice for Brain's rival, Snowball. He also formed a friendship with Pinky and Brain's voices, Rob Paulsen and Maurice LaMarche while working on Pinky and the Brain, LaMarche even called McDowall "A delight as a human being". His final acting role in animation was for an episode of Godzilla: The Series in the episode "DeadLoch". In A Bug's Life (1998), one of his final contributions to motion pictures, he provides the voice of the ant Mr. Soil.

During the 1990s, McDowall redoubled his passion for film preservation and participated in the restoration of Cleopatra (1963), He amassed a personal library of over 1000 books on Hollywood and Broadway history. In 1997, he hosted the MGM Musicals Tribute at Carnegie Hall. McDowall served for several years in various capacities on the Board of Governors of the Academy of Motion Picture Arts and Sciences, the organisation that presents the Oscar Awards, and on the selection committee for the Kennedy Center Awards. He was Chairman of the Actors' Branch for five terms. He was elected President of the Academy Foundation the year that he died. He worked tirelessly to support the Motion Pictures Retirement Home, where a rose garden named in his honour was officially dedicated on 9 October 2001 and remains a part of the campus.[5]

McDowall received recognition as a photographer, working with LOOK, Vogue, Collier's and LIFE, including a cover story on Mae West for LIFE, and published five books of photographs, each featuring photos and profile interviews of his celebrity friends interviewing each other, such as Elizabeth Taylor, Judy Garland, Judy Holliday and Maureen O'Hara, Katharine Hepburn, Lauren Bacall, and others. One of his last public appearances occurred when he accompanied actress Luise Rainer to the 70th Oscar ceremony, and performing as "Scrooge" in A Christmas Carol at Madison Square Garden in 1997-98.

Although McDowall made no public statements about his sexual orientation during his lifetime, several authors have claimed that he was discreetly gay.[6][7]

In 1974, the FBI raided McDowall's home and seized his collection of films and television series in the course of an investigation into film piracy and copyright infringement. His collection consisted of 160 16-mm prints and more than 1,000 video cassettes, at a time before the era of commercial videotapes, when there was no legal aftermarket for films.. McDowall had purchased Errol Flynn's home cinema films and the prints of his own directorial debut, Tam-Lin (1970), and transferred them all to tape for longer-lasting archival storage. No charges were filed against McDowall.

On 3 October 1998, aged 70, McDowall died of lung cancer at his home in Studio City.[8] Dennis Osborne, a screenwriter friend, had cared for the actor in his final months. The media quoted Osborne as having said, "It was very peaceful, it was just as he wanted it. It was exactly the way he planned."[9]