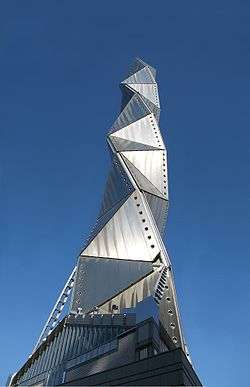 Arata Isozaki (磯崎 新, Isozaki Arata; born 23 July 1931) is a Japanese architect from Ōita. He graduated from the University of Tokyo in 1954.

Isozaki worked under Kenzo Tange before establishing his own firm in 1963. His early projects were influenced by European experiences with a style mixed between "New Brutalism" & "Metabolist Architecture" (Oita Medical Hall, 1959-1960) according to Reyner Banham. His style continued to evolve with buildings such as the Fujimi Country Club (1973–74) and Kitakyushu Central Library (1973–74). Later he developed a more modernistic style with buildings such as the Art Tower of Mito (1986–90) and Domus-Casa del Hombre (1991-1995).

Isozaki has designed buildings both inside and outside Japan. He is considered one of world's most illustrious architects, having won multiple international awards.

In 2005, Arata Isozaki founded the Italian branch of his office, Arata Isozaki & Andrea Maffei Associates. Two major projects from this office are currently underway: CityLife office tower, a redevelopment project in the former trade fair area in Milan, and the new Town Library in Maranello, Italy.[1]