For other uses, see Mito. 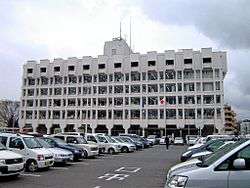 The Yamato people settled in Mito around the 4th century CE. Around the end of the Heian period, Baba Sukemoto, a warlord of the Heike clan, moved to Mito and built a castle there. Mito Castle changed hands several times after that: a daimyo named Satake Yoshinobu won it in the mid-16th century, but he was forced to surrender it to Tokugawa Ieyasu in 1603 after the epic Battle of Sekigahara. Ieyasu's son Tokugawa Yorifusa then was Mito Castle, becoming head of one of the three "gosanke" branches of the clan qualified to provide a new shogun should the main family line fail. During this period, Mito was the seat of the so-called Mito School, a congregation of nativist scholars of Confucian persuasion led by Aizawa Seishisai, who during the 18th and 19th centuries advocated Western learning as a means not only to further Japanese technological development and international strength, but as means to prove Japanese uniqueness and superiority among nations. The Kōdōkan was the largest of the han schools. The capital of Edo was directly connected to Mito by the Mito Kaidō.[1] The Tokugawa ruled Mito until the Meiji restoration.

The modern city of Mito was formed on April 1, 1889 with the establishment of the municipalities system. It was one of the first 31 cities in Japan. With a population of 25,000, it was designated as the prefectural capital. By 1900, the Joban Line connected Mito to Tokyo, and by 1910, telephones and electric lighting were available throughout the city. More than three-quarters of the city was burned to the ground during the Mito air raid of August 2, 1945, just before the end of World War II.

The borders of Mito expanded in 1955-1958 through the annexation of the neighboring villages of Kamiono, Watari, Yoshida, Sakedo, Kawawada, Yanagawa, Kunita and Iitomi and Akatsuka. The village of Tsunezumi was annexed in 1992. In 2001, Mito was designated a special city with increased local autonomy. The neighboring town of Uchihara was annexed in 2005. The city suffered from severe damage in the 2011 Tōhoku earthquake and tsunami with 25,982 houses completely or partially destroyed; however, there were only two fatalities.

Mito has a humid subtropical climate (Köppen climate classification Cfa) with hot summers and cool winters. Precipitation is significant throughout the year, but the winter months are somewhat drier.

Mito is primarily a regional commercial center and administrative city as most industry in Ibaraki is concentrated around the nearby cities of Tsukuba or Hitachi. Mito has a modest but thriving tourism industry, centered on the Kairaku-en gardens and local museums dedicated to the Tokugawa family.

Mito is the home city of the J-League professional soccer team, Mito HollyHock.