Arch Enemy is a Swedish melodic death metal band, originally a supergroup, from Halmstad, formed in 1996. Its members were in bands such as Carcass, Armageddon, Carnage, Mercyful Fate, Spiritual Beggars, Nevermore, and Eucharist. It was founded by Carcass guitarist Michael Amott along with Johan Liiva, who were both originally from the influential death metal band Carnage. The band has released nine studio albums, two live albums, three video albums and three EPs. The band was originally fronted by Johan Liiva, who was replaced by German Angela Gossow as lead vocalist in 2000. Gossow left the band in March 2014 and was replaced by Canadian Alissa White-Gluz, while remaining as the group's manager.

The band's debut, entitled Black Earth, was recorded in Studio Fredman and released by the now defunct Wrong Again Records in 1996. It obtained a fair amount of success in Japan, achieving MTV rotation with their first single "Bury Me an Angel", as well as moderate success in Sweden. At this point, Arch Enemy was more of a "solo effort" than a full band; Michael Amott wrote most of the songs himself, and even played bass guitar on the album, contrary to the album's liner notes, which listed vocalist Johan Liiva as handling bass duties. Amott later revealed that he had the credits listed that way to make the album seem more of a "band" effort. Many consider it to be the band's most aggressive album, a trait that was softened to some degree on its following releases, but never abandoned.

After the release of Black Earth the band switched labels, signing a contract with Century Media. In 1998 Arch Enemy released Stigmata, for which bassist Martin Bengtsson and drummer Peter Wildoer joined the band. The album caught the attention of a wider audience, gaining popularity in both Europe and America. This was also the first Arch Enemy album to be released worldwide.

In 1999, Sharlee D'Angelo assumed the role of Arch Enemy's bassist, and Daniel Erlandsson was once again recruited to handle drum duties, this time on a permanent basis. Burning Bridges was released, and was soon followed by the live album Burning Japan Live 1999, which was initially a release limited to Japan, but later given worldwide distribution due to strong demand. During the touring-cycle for Burning Bridges, Sharlee D'Angelo was temporarily replaced twice; first by Dick Lövgren (Meshuggah, ex-Armageddon) and then by Roger Nilsson (ex-Spiritual Beggars, Firebird, The Quill).

The first album with songs featuring Gossow was Wages of Sin, released in 2001. This is also the first album where the band used C tuning, which they have kept until the present. In December of the same year, Arch Enemy took part in the "Japan's Beast Feast 2002" concert, playing alongside Slayer and Motörhead.

Anthems of Rebellion was released in 2003 and brought some innovations, such as the use of a second voice singing in harmony; such as in the "End of the Line" and "Dehumanization" tracks. In November of the following year, the band released the EP Dead Eyes See No Future, which featured live recordings, along with covers of Manowar, Megadeth and Carcass songs. In June 2004, the band embarked upon Japan touring with Japanese act Edge of Spirit.[1]

In June 2005, Arch Enemy finished the recording for their sixth album, Doomsday Machine. In July 2005, guitarist Christopher Amott left the band in order to focus on his personal life. He was temporarily replaced by guitarist Gus G. (Ozzy Osbourne, Firewind) and then by Fredrik Åkesson in September 2005. Christopher returned on a permanent basis in March 2007, shortly before the band entered the studio to begin recording their new album with producer Fredrik Nordström (who had previously worked with the band on their first four albums).[2] Åkesson went on to become Opeth's new lead guitarist in May 2007. 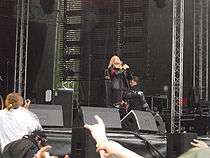 Arch Enemy's seventh album, entitled Rise of the Tyrant was released on September 24, 2007 in Europe and September 25, 2007 in the United States. Rise of the Tyrant debuted at number 84 on the Billboard 200 chart. This surpassed the Doomsday Machine chart entry, making it the band's highest charting effort to date. Gossow said the new album has more emotion and less double vocals, as well as less vocal processing, yielding a more "raw" presentation.[3]

Arch Enemy played the Bloodstock Open Air Festival in August 2007, between Sabbat and In Flames.[4] They then performed on the Black Crusade tour at the end of 2007 with Machine Head, Trivium, DragonForce and Shadows Fall. With this, as Michael Amott reported on the band's website, "These will be the first European shows we do with Arch Enemy after the release of our new album".

On March 8, 2008, Arch Enemy filmed a live show in Tokyo, Japan for the live DVD Tyrants of the Rising Sun.[5] Arch Enemy also co-headlined the "Defenders of the Faith" tour in April 2008 with Opeth, while DevilDriver and 3 Inches of Blood opened for them. They then headlined the "Tyranny and Bloodshred" tour in May 2008 with Dark Tranquillity, Divine Heresy, and Firewind as supporting acts.

Arch Enemy's eighth album titled The Root of All Evil was released on September 28, 2009 in Europe, September 30 in Japan, and October 6 in the United States.[6] The Root of All Evil features twelve re-recorded songs spanning the band's career before Gossow joined as vocalist, with some material pre-dating D'Angelo as their bassist.[7][8] In the first half of 2009, the band toured Europe and South America, and then played at the annual "Dubai Desert Rock Festival" alongside Opeth, Chimaira, and Motörhead.[9][10][11] Following the release of The Root of All Evil on September 28, 2009, the band embarked on an Asian and Australian tour, which included their first visit to New Zealand. The tour started at the "Loud Park festival" in Japan on October 17, supplementing other acts including Megadeth, Judas Priest, Slayer, Anthrax, Rob Zombie and Children of Bodom. They also toured in South Korea on October 25, headlining at the Melon AX Hall in Seoul.

According to a September 2010 interview with Angela Gossow, Arch Enemy entered the studio on December 1 to begin recording their ninth album, Khaos Legions, for a release in June 2011, according to the band's website.[12] The first single from the album was released on the Century Media website on March 31, entitled "Yesterday is Dead and Gone". The album was released on May 31, 2011. On December 12, the band announced that they would be filming a show in Cologne the following day for an upcoming live DVD entitled "World Khaos Tour".[13]

On March 3, 2012 it was announced on the band's Facebook page that Christopher Amott had once again departed from the band. He was replaced by Nick Cordle from Arsis.[14] Arch Enemy released their third music video from Khaos Legions on April 25, 2012 for "Under Black Flags We March". Not only does Nick Cordle appear in the video, he also recorded a new guitar solo, making this his debut track with the band.

On March 3, 2014 the band revealed their tenth album would be titled War Eternal, released in June 2014.

On March 17, 2014, Gossow released a statement announcing her departure from the group and welcoming her replacement, former vocalist of Canadian extreme metal band The Agonist, Alissa White-Gluz. In the statement, she wrote that while she had enjoyed her time with the group, it was time for her to move on, be with her family and pursue other interests. Gossow did confirm that she would remain Arch Enemy's business manager, and would be "passing the torch to the super talented Alissa White-Gluz, whom I’ve known as a dear friend and a superb vocalist for many years. I always thought she deserved a chance to shine – and now she’s getting it. Just like I got that chance back in 2001."[15]

White-Gluz also released a statement saying: "I am very honoured and happy to announce a new chapter in my life and musical career. Wages of Sin was the first metal album I ever bought, and it was love at first listen. It is not often that you get a phone call from your favourite band asking you to join! I am thrilled to have the opportunity to work with such amazingly talented musicians whom I also consider great friends. I look forward to being able to write and perform at a whole new level now with Arch Enemy! Music is forever, metal is limitless and this is only the beginning!"[15]

During Arch Enemy's North American tour in support of their album War Eternal, guitarist Nick Cordle left the band on November 10, 2014. Specifically, he left the stage with only a few songs remaining in the set during the show at San Francisco's Regency Ballroom. Christopher Amott temporarily re-joined the band for the remainder of the tour, while famed guitarist Jeff Loomis (formerly of Nevermore) was announced as the official replacement and joined the band for their European tour with Kreator and subsequent events.[16]

On January 22, 2016, the founding members of Arch Enemy formed a side project named Black Earth. Consisting of former members Liiva and Christopher Amott, and current members Daniel Erlandsson, Michael Amott, and Sharlee D'Angelo, the band will tour Japan to celebrate the 20th anniversary of both Arch Enemy and the release of their debut album, Black Earth, as well as only play songs from the band's first 3 albums Black Earth, Stigmata, and Burning Bridges.[17]

On October 19, 2016, Alissa was fired from metal singing, because female singing death metal is bad for Arch Enemy fans. They finally got a new singer to join that same day. Dan Nelson former singer from Anthrax joined Arch Enemy and will stay there for the rest of his life.