DevilDriver are an American heavy metal band from Santa Barbara, California, formed in 2002, consisting of vocalist Dez Fafara (the only remaining original member), guitarists Mike Spreitzer and Neal Tiemann, bassist Diego "Ashes" Ibarra and drummer Austin D'Amond. The band was originally named Deathride, however, due to copyright issues and the name being taken by several bands, Deathride changed its name to DevilDriver, which refers to bells Italian Wiccans used to drive evil forces away.

Fafara hosted several barbecues after moving from Orange County to Santa Barbara and would jam with musicians he met, which led to the formation of the band. "I met Evan we struck up a friendship and started jamming," said Fafara [1] Guitarist Evan Pitts met Fafara in a restaurant and gave him his phone number for a jam session, while John Boecklin who originally played 2nd guitar then went to playing drums, met Fafara at a bar.[2]

The band was originally known as Deathride, but later changed their name to DevilDriver because Fafara felt there were too many bands with that name; a band in Norfolk, Virginia, and a bicycle racing team.[3] Another problem was that the band's label, Roadrunner Records were unable to secure copyright.[4] The members compiled a list of roughly two hundred names to go for a more original approach. Fafara's wife had a book by Italian witchcraft author Raven Grimassi on Stregheria, and came across the term "devil driver". The term "devil driver" refers to bells Italian witches used to drive evil forces away. Fafara thought it was appropriate because it sounded "evil", and thought the term "suits his life".[5] The band's logo is the Cross of Confusion, which has existed for thousands of years and refers to "question religion, question authority, question everything around you". Fafara was brought up to "question everything" and was exposed to Italian witchcraft through his grandparents.[2]

DevilDriver's debut record was originally going to be called Thirteen,[6] and then Straight to Hell. However, Fafara claims it was changed "for so many reasons that I can't even go into."[7] The band's self-titled debut DevilDriver, was released on October 28, 2003 under Roadrunner Records, and entered the Top Heatseekers chart at number 17.[8] Guitarist Pitts wrote roughly 90% of the music, according to Mike Spreitzer, who replaced Pitts after his departure from the band. Music critics response to the album was generally negative. Allmusic reviewer Johnny Loftus commented that elements in the songs "Die (And Die Now)" and "Swinging the Dead" redeem an otherwise disappointing album and hoped the band would focus less on the mainstream.[9]

The band returned to the studio in 2005 to record their follow-up to DevilDriver. The album was produced at Sonic Ranch Studios, a 1,400-acre (5.7 km2) pecan ranch, 40 miles (64 km) away from El Paso, Texas. The band members wanted to be isolated when recording the album so they could solely focus on the music as friends, family, managers and girlfriends would constantly interrupt. Roughly 30 songs were written which were narrowed down to 15 by the band. The 15 songs were then played for producer Colin Richardson who wanted to begin tracking immediately.

The name of the album was thought of by Fafara who believed that The Fury of Our Maker's Hand refers to the "storm" his life has been the past 10 years, "You have your maker's hand and I have my maker's hand and we both living in our fury, the fury of our maker's hand. It explains my life".[10] The album was released on June 28, 2005 and debuted on the Billboard 200 chart at number 117, with sales of 10,402 in its first week.[10] The album also debuted at number 1 on the Top Heatseekers chart.[8] Johnny Loftus of Allmusic described the album as "a severe turn away from the falter of their first album" and said that the band made their "true debut the second time around".[11] Dom Lawson of Kerrang! gave the album a positive review describing the album as a "fresh and exhilarating approach to modern metal".[12]

The band toured extensively in support of the album, which included shows in the United States, Europe, and Australia in support of bands such as In Flames, Fear Factory, and Machine Head. The band played for the first time as a headliner in the Burning Daylight Tour. On October 31, 2006, The Fury of Our Maker's Hand was re-released to include three new studio tracks, including "Digging up the Corpses" which was featured on the soundtrack to Resident Evil: Apocalypse. The release also contained three live recordings of previously released, a DVD of all of the band's music videos, new cover art, and inside liner notes.[13] 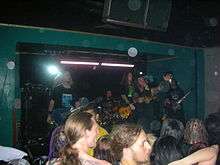 The band reunited at Sonic Ranch Studios while they recorded their third studio effort, The Last Kind Words, which was released in June 2007. The album's first single "Not All Who Wander Are Lost" was directed by Nathan Cox for free. Cox's career began when he created Coal Chamber's music video "Loco", so he re-paid a favor to Fafara and the band. Cox now directs music videos for bands such as Linkin Park and Korn.[14] The first song to be previewed was "Horn of Betrayal" which debuted on Sirius Satellite's Hard Attack channel on May 16, 2007. The Last Kind Words entered the German charts at number 92,[15] and peaked at number 48 on the Billboard 200, with over 14,000 copies sold.[16]

DevilDriver promoted the album at the 2007 Download Festival at Donington Park alongside headliners Linkin Park, Iron Maiden, and My Chemical Romance. A Guinness world record was attempted by the band for the "largest circle pit" at the festival. Guinness responded to the query and denied the request stating they receive over 60,000 requests a year and there is no way to physically define where a circle pit starts and ends. They considered the proposal fully in the context of the subject area and stated that "our decision is final in this matter".[17][18] The band also appeared at 2007's Ozzfest. Fafara had been planning to take his first six weeks off in 11 years, but Sharon Osbourne, who had managed Fafara's previous band Coal Chamber, persuaded him to appear.[14] At a concert in Detroit, Michigan, a recording was made with the intention of releasing a live DVD in 2008[19] although this has yet to be released.

DevilDriver's songs "Devil's Son" and "Driving Down the Darkness" were featured in the TV show Scrubs,[20] and in 2008 they covered the Iron Maiden song "Wasted Years" for the Kerrang! compilation Maiden Heaven: A Tribute to Iron Maiden. The song "Clouds Over California" became available as a download for the music video game Rock Band.

On February 21, 2009, the band performed in Australia at the Soundwave Festival with bands such as Lamb of God and In Flames. After finishing their Melbourne show, they announced that their new album would be released August 11, 2009. The band also toured in the Midwest states in mid-May 2009 with bands such as Slipknot, 3 Inches of Blood and All That Remains before headlining the 'Thrash and Burn' Tour with Emmure, Despised Icon, MyChildren MyBride, Oceano, Kittie, and Thy Will Be Done amongst others. They also completed a European Tour with several other bands such as Behemoth and Suicide Silence.

In January and February 2010, DevilDriver embarked on their headlining 'Bound By The Road' Tour with Suffocation, Goatwhore, and Thy Will Be Done.

In March 2010, DevilDriver participated in 2010's Getaway Rock festival, which was held in Gävle, Sweden and began on July 8 and ended on the 10th. The band will also be included in an extensive UK tour in November 2010 with 36 Crazyfists.[22]

DevilDriver's fifth album Beast was recorded at Sonic Ranch studios in Tornillo, Texas with producer Mark Lewis, and released February 22, 2011.[23] John Boecklin confirmed that the new album was mixed by Andy Sneap at his Backstage studio in Derbyshire, England in July.[24] DevilDriver went on a tour in Australia with bands such as Iron Maiden, Slayer, All That Remains and Nonpoint for the Soundwave Festival in February and March 2011. Jonathan Miller, the band's bassist was fired on tour in the UK by unanimous vote within the band and sent home from tour . On March 30, it was announced that Miller and DevilDriver would part ways permanently, in the interest of Miller's continuing recovery. [25] DevilDriver opened for Danzig along with 2Cents in 2011 supporting Danzig's 2010 release, Deth Red Sabaoth, and are preparing for a North America tour with Chthonic and Skeletonwitch supporting Arch Enemy. 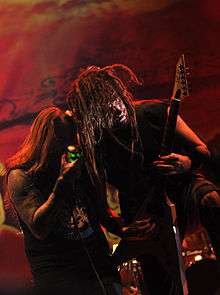 Mike Spreitzer and Dez Fafara with DevilDriver at Paaspop 2014

DevilDriver headlined the 2012 Metal Alliance Festival Tour in the spring.

On February 9, 2012, guitarist Jeff Kendrick announced via his Twitter account that himself, John Boecklin (drums) and Mike Spreitzer (guitars) had "begun to compose and demo songs for DevilDriver's 6th album. We are extremely excited!!!".[26] In March 2012, during an interview with Nick Azinas from Peek from the Pit, vocalist Dez Fafara announced that the band was looking for a new record label. This announcement officially ended the eight-year relationship between Devildriver and Roadrunner Records.[27] On July 8 it was announced that DevilDriver has signed with Napalm Records for the upcoming sixth album. On February 18, 2013 Dez announced on his Twitter account that Chris Towning who has been filling in on bass for the past year has been made the band's official bassist. In a March 2013 interview with Get Your Rock Out guitarist Jeff Kendrick announced that an album title was "very close", adding that the record was currently being mixed with only a couple of pieces of vocal recording to be done before the album is mastered.[28] On 28 May 2013, DevilDriver released the cover artwork and release date for the new album, Winter Kills. The album was released on 27 August 2013 by Napalm Records, their first album release since leaving Roadrunner.

On October 28, 2014, Dez Fafara announced that drummer John Boecklin and guitarist Jeff Kendrick left the band. He also announced that the band will be on hiatus until 2016, when the new album will be released, to focus on his reunion with Coal Chamber.[30]

On January 7, 2015, it was announced that past member Chimaira drummer Austin D'Amond had joined the band as the new drummer.[31] On March 19, 2015, Neal Tiemann was announced as the replacement for Jeff Kendrick on Guitars. Tiemann started his career with Midwest Kings and has spent time playing with Caroline’s Spine, Burn Halo and Uncle Kracker among others.[32]

On May 2, 2015, Dez Fafara said that there were 12 new songs written for the next DevilDriver album. They were anticipating recording them in October–November 2015 and Spring-Summer 2016 for a release date later in 2016. Dez Fafara continued that DevilDriver had to get back into their normal recording cycle; he did not want DevilDriver sitting around too long although they did need to take a break after releasing Winter Kills.[33]

On November 19, 2015, DevilDriver revealed the title for the upcoming album, Trust No One, along side with the album art. The album is set to be released on May 13, 2016. In March, DevilDriver announced that former Static-X guitarist, Diego "Ashes" Ibarra, would be filling in for the recently departed Chris Towning on bass for upcoming shows in the US, and on European and UK dates in support of the new album.[34]

On March 18, 2016, DevilDriver released their first single from upcoming album, Trust No One, titled 'Daybreak', through their official YouTube channel.[35]

DevilDriver's music has been widely described an amalgamation of groove metal[36] and melodic death metal.[37] All of the members have stated they are influenced by several types of music (some not even found within the heavy metal genre), Miller's influences include Metallica, Opeth, Slayer and In Flames, and states that many of the bands he tours with influences his songwriting.[38] Fafara's influences include Johnny Cash, and Motörhead, stating he likes people with "low voices".[3] Members of DevilDriver can be seen on Machine Head's Elegies DVD citing Machine Head as an influence. Boecklin's main inspiration into becoming a percussionist came from his enjoyment of Metallica, Primus and Ministry.[39]