The Arch of Titus (Italian: Arco di Tito; Latin: Arcus Titi) is a 1st-century A.D. honorific arch,[1] located on the Via Sacra, Rome, just to the south-east of the Roman Forum. It was constructed in c. A.D. 81 by the Emperor Domitian shortly after the death of his older brother Titus to commemorate Titus' victories, including the Siege of Jerusalem (AD 70). The arch has provided the general model for many triumphal arches erected since the 16th century—perhaps most famously it is the inspiration for the Arc de Triomphe in Paris, France.[2] 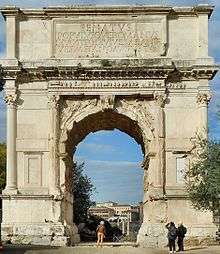 Front view of the Arch of Titus

Based on the style of sculptural details, Domitian's favored architect Rabirius, sometimes credited with the Colosseum, may have executed the arch. Without contemporary documentation, however, attributions of Roman buildings on basis of style are considered shaky.

The medieval Latin travel guide Mirabilia Urbis Romae noted the monument, writing: "the arch of the Seven Lamps of Titus and Vespasian; [where is Moses his candlestick having seven branches, with the Ark, at the foot of the Cartulary Tower"][3][4]

The Frangipani family turned it into a fortified tower in the Middle Ages.[5] It was one of the first buildings sustaining a modern restoration, starting with Raffaele Stern in 1817 and continued by Valadier under Pius VII in 1821, with new capitals and with travertine masonry, distinguishable from the original. The restoration was a model for the country side of Porta Pia.[5][6]

The arch is large with both fluted and unfluted columns, the latter being a result of 19th century restoration.[7] The spandrels on the upper left and right of the arch contain personifications of victory as winged women. Between the spandrels is the keystone, on which there stands a female on the East side and a male on the West side.[7] 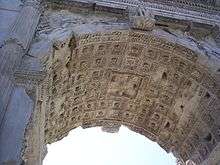 Detail of the central soffit coffers

The soffit of the axial archway is deeply coffered with a relief of the apotheosis of Titus at the center. The sculptural program also includes two panel reliefs lining the passageway within the arch. Both commemorate the joint triumph celebrated by Titus and his father Vespasian in the summer of 71.

The south panel depicts the spoils taken from the Temple in Jerusalem. The golden candelabrum or Menorah is the main focus and is carved in deep relief. Other sacred objects being carried in the triumphal procession are the Gold Trumpets, the fire pans for removing the ashes from the altar, and the Table of Shew bread.[7] These spoils were likely originally colored gold, with the background in blue.[7] In 2012 the Arch of Titus Digital Restoration Project discovered remains of yellow ochre paint on the menorah relief.[8]

The north panel depicts Titus as triumphator attended by various genii and lictors, who carry fasces. A helmeted Amazonian, Valour, leads the quadriga or four horsed chariot, which carries Titus. Winged Victory crowns him with a laurel wreath.[7] The juxtaposition is significant in that it is one of the first examples of divinities and humans being present in one scene together. This contrasts with the panels of the Ara Pacis, where humans and divinities are separated.[7]

The sculpture of the outer faces of the two great piers was lost when the Arch of Titus was incorporated in medieval defensive walls. The attic of the arch was originally crowned by more statuary, perhaps of a gilded chariot.[7] The main inscription used to be ornamented by letters made of perhaps silver, gold or some other metal.

which means "The Roman Senate and People (dedicate this) to the divine Titus Vespasianus Augustus, son of the divine Vespasian."

The opposite side of the Arch of Titus received new inscriptions after it was restored during the pontificate of Pope Pius VII by Giuseppe Valadier in 1821. The restoration was intentionally made in travertine to differentiate between the original and the restored portions.

(This) monument, remarkable in terms of both religion and art, had weakened from age: Pius the Seventh, Supreme Pontiff, by new works on the model of the ancient exemplar ordered it reinforced and preserved. 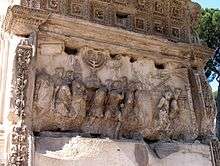 Close up of relief showing spoils from the Siege of Jerusalem

The Arch provides one of the few contemporary depictions of Temple period artifacts.[11][12]

The seven-branched menorah and trumpets are clearly depicted. It became a symbol of the Jewish diaspora. In a later era, Pope Paul IV made it the place of a yearly oath of submission. Until the modern State of Israel was founded in 1948, Jews refused to walk under it due to a rabbinical prohibition.[13]

The menorah depicted on the Arch served as the model for the menorah used on the emblem of the state of Israel.[14]

Works modeled on, or inspired by, the Arch of Titus include: