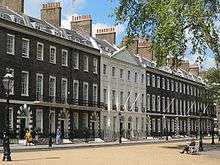 The Architectural Association School of Architecture in London, commonly referred to as the AA, is the oldest independent school of architecture in the UK and one of the most prestigious and competitive in the world.[4] Its wide-ranging programme of exhibitions, lectures, symposia and publications have given it a central position in global discussions and developments within contemporary architectural culture.[5][6] 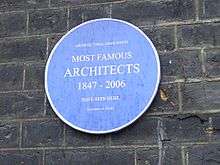 The foundation of the Architectural Association was as an alternative to the practice where young men were articled to established architects. This practise offered no guarantee for educational quality or professional standards. The AA believed it was open to vested interests,abuse, dishonesty and incompetence.[7]

This situation led two articled pupils, Robert Kerr (1823–1904) and Charles Gray (1827/28–1881), to propose a systematic course of training provided by the students themselves.[7] Following a merger with the already existing Association of Architectural Draughtsmen, the first formal meeting under the name of the Architectural Association took place in May 1847 at Lyons Inn Hall, London.[8] Kerr became the first president, 1847–48.[9]

The AA School was formally established in 1890. In 1901, it moved premises to the former Royal Architectural Museum. In 1917, it moved again, to its current premises in Bedford Square, central London (it has since acquired additional London premises in John Street and a 350-acre (1.4 km2) site at Hooke Park in Dorset). The school has also acquired property on Morwell Street behind Bedford Square.[10] Women were first admitted as students to the AA School during the First World War in 1917.[11]

In the 1960s, the school provided a platform for radically new concepts like the Fun Palace by Cedric Price and the establishment and the legacy of the Archigram group.[7] Alumni returned to the AA as teachers as exemplified by Pritzker Prize winners Rem Koolhaas and his pupil Zaha Hadid.

In its own opinion, Alvin Boyarsky (Chairman from 1971 to 1990),[7] says that the AA is one of the world's most international and prestigious schools of Architecture, attracting and selecting students and staff from more than 60 countries worldwide, with a long list of visiting critics, lecturers and other participants from around the world each year. The students of the AA have been addressed by many eminent figures, from John Ruskin and George Gilbert Scott in the 19th century, to more recently Richard Rogers, an alumnus of the school.

Courses are divided into two main areas – undergraduate programmes, leading to the AA Diploma (Part 2), and postgraduate programmes, which include specialised courses in Landscape Urbanism (LU),[12] Housing and Urbanism, Sustainable Environmental Design, Histories and Theories, Emergent Technologies,[13] Design Research Lab (DRL), as well as day-release course in Building Conservation, garden conservation, and environmental access. Recently launched programmes Projective Cities, Design + Make and Interprofessional Studio. Since its foundation, the School has continued to draw its teaching staff from progressive international practices, and they are reappointed annually, allowing a continual renewal of the exploration of architectural graphics and polemical formalism.[14]

The school has a bookshop,[15] containing a range of architectural books. The bookshop is used as a platform for the AA's own books.[16] AA Publications has a long tradition of publishing architects, artists and theorists early in their careers, as well as occasionally publishing figures who have already gained notoriety in other fields of expertise, such as Salman Rushdie. AA Publications publishes the journal AA Files and the AA Book, known as the Projects Review, which annually documents the work undertaken by members of the school from Foundation to Graduate programmes. AA Publications are designed and edited by the AA Print Studio, originally established in 1971 as part of the Communications Unit directed by Denis Crompton of Archigram.[17] The school had its own independent radio station.[18] The AA gallery exhibits architects.

The school is notable as existing outside the state-funded university system, with tuition fees comparable to that of a private school. Since non-EU students are charged higher fees to attend state universities however, the AA is competitively priced by comparison; with a higher proportion of overseas students enrolled than many other UK architecture schools.[19]

It exists outside the UCAS application system; even at undergraduate/first degree level direct application is the norm. It is not included in many books which guide potential undergraduates to choose appropriate courses, indeed many are unaware of its existence until they are studying architecture elsewhere.[20]