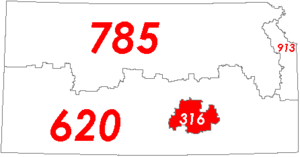 Area Code 316 is the area code for telephone exchanges in the city of Wichita, Kansas and surrounding communities. The area code formerly covered all of southern Kansas.

History of area codes in Kansas

Despite a relatively small population, Kansas was scheduled to receive two area codes under the original North American Numbering Plan proposal from the Bell Telephone Company in 1946. Under the original plan, area codes were to be assigned sequentially based on geography; Kansas initially received area codes 617 and 618.[1]

In October 1947, the final plan was adopted; Kansas' two area codes had been radically altered from the original plan. Southern Kansas (Wichita, Dodge City, Emporia, Garden City) received 316, while the northern half (Kansas City, Topeka, Lawrence, Salina, Hays) got 913. Long-distance dialing by subscribers using area codes would not be implemented until late 1951 in New Jersey.

The original configuration was unusual for Kansas, a state which has usually seen east-west geographic disputes. However, a north-south split was deemed necessary because Kansas' three major metropolitan areas (Kansas City, Topeka, and Wichita) are all in the east.

The two area codes of Kansas remained constant for more than 40 years. But by the mid-1990s, the pool of available exchange codes in area code 913 was being exhausted due to the proliferation of cell phones and pagers, as well as a rapid population growth in Overland Park, Kansas, a suburb of Kansas City.

Late in 1996, the Kansas Corporation Commission (KCC), which oversees telecommunications in the state, requested relief from the North American Numbering Plan Administration (NANPA) for the exchanges of area code 913, and on February 12, 1997, the NANPA responded by splitting most of northern Kansas from area code 913 into the new area code 785. From July 20, 1997 through October 2, 1998, customers affected by the new area code could use either 913 or 785 when dialing long-distance. On October 3, 1998, the 785 area code became mandatory in the new calling area.

The southern half of the state would soon follow. With a similar proliferation of cell phones, especially in and around Wichita, the KCC requested relief for area code 316. On September 21, 2000, the NANPA split off most of southern Kansas and gave it the new 620 area code, which now completely surrounds 316. Between February 3 and November 2, 2001, numbers in the affected area could be dialed using 316 or 620, whereafter when the use of 620 became mandatory.

When most of area code 316 was moved to the new area code 620, most of Sedgwick County, as well as portions of Butler, Kingman, Reno, Harvey and Sumner counties remained in area code 316.

When area code 316 covered all of southern Kansas, the boundary ran from west to east roughly following a path along K-4 and K-96. The code boundary dipped along I-135 in McPherson County and continued east to just north of Emporia in Lyon County along the Kansas Turnpike, and ended at the Missouri state line.

With the area code now shrunken to a fraction of its former size, 316 is the only one of Kansas' four area codes that does not reach the Missouri border.