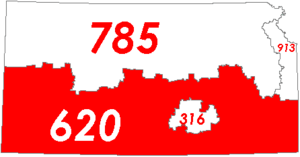 Area Code 620 was the result of a split from 316 on February 3, 2001. Area code 620 covers most telephone exchanges in southern Kansas. 620 stretches from the Colorado border to the east, to the Missouri border, while excluding the Wichita Metropolitan Area (316).

The permissive dialing period for 620 ended on November 3, 2001. The most populous cities covered by the area code are Dodge City, Garden City, and Hutchinson.

The boundary between area codes 620 and 785 runs from west to east roughly following a path along K-4 and K-96. The code boundary dips along I-135 in McPherson County and continues east to just north of Emporia in Lyon County along the Kansas Turnpike, where the boundaries of area codes 620, 785 and 913 meet. Area code 620 shares its northern boundary with area code 913's southern boundary, ending south of the Kansas City metropolitan area.

All of Sedgwick County, along with parts of Butler and Harvey counties remain in area code 316.