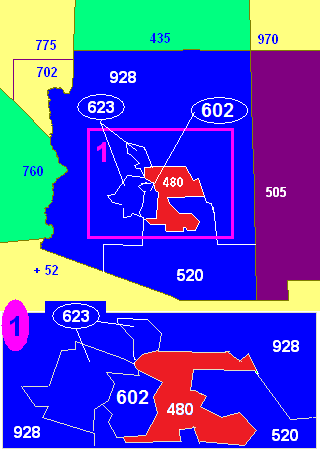 North American area code 480 is a telephone area code in Arizona serving the eastern and northern portions of the Phoenix metropolitan area. It was created on April 1, 1999 in a three-way split of area code 602, when it was apparent that the Valley of the Sun was growing too fast for it to remain entirely in one area code. Generally, 480 is coextensive with the East Valley, while most of the West Valley is area code 623 and most of Phoenix itself stayed in 602.

Original plans called for the 480 code to be an overlay code for the entire Phoenix metro area. However, overlays were a new concept at the time, and met with considerable resistance due to potential geographic ambiguity caused by overlay codes, as well as the requirement for ten-digit dialing. A three-way geographic split was chosen instead, with 480 being assigned to the East Valley.

The 480 area code encompasses Scottsdale, Paradise Valley, Fountain Hills, Tempe (except for a small portion west and south of the I-10 Broadway Curve, which stayed in 602), Chandler, Gilbert, Mesa, Queen Creek, Apache Junction, as well as far northeast Phoenix and the Phoenix neighborhood of Ahwatukee, and newer unincorporated communities in far northwest Pinal County which are becoming part of the Greater Phoenix metropolitan area due to heavy development. Also in area code 480 are pagers for the Iridium satellite telephone service.