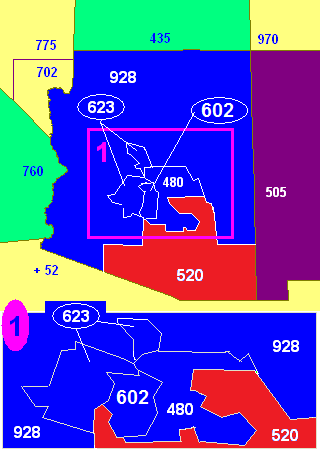 North American area code 520 is a state of Arizona telephone area code serving Tucson and most of the southeastern part of the state.

It was created in a split from area code 602 on March 19, 1995. Previously, 602 had been the sole area code for the entire state of Arizona since the introduction of area codes in 1947. With Arizona's rapid growth during the second half of the 20th century, it was taken for granted that the state would need another area code. However, the split was hastened by the proliferation of cell phones and pagers.

Originally, 520 encompassed the entire state outside of the Phoenix metropolitan area, as well as a few outer portions of western and southern Maricopa County. It completely surrounded 602, which was retained by most of the Phoenix area.

Within two years of its creation, however, 520 was already close to exhaustion due to the rapid growth of the Tucson area (and to a lesser extent Yuma and Flagstaff) as well as the proliferation of cell phones and pagers. In 2001, the northern and western portions of the old 520 split off as area code 928. All of Pima, Santa Cruz and Cochise counties, most of Pinal County and part of southern Maricopa County kept 520, while Yuma and La Paz counties, western Maricopa County and all of northern Arizona were switched to 928.

Communities served by this area code: