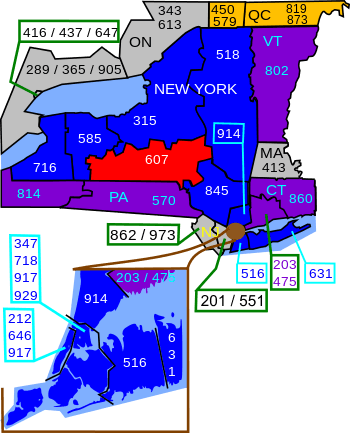 Area code 607 is shaded red; the rest of the state of New York is blue.

North American area code 607 is a state of New York telephone area code servicing parts of its Southern Tier (which borders Pennsylvania). It was split from parts of area codes 315 and 716 in 1954.[1] Initially, in the late 1940s, area codes with a middle digit of "0" (x0x-xxx-xxxx) were assigned only to jurisdictions covering an entire state. Along with 507 in Minnesota and 606 in Kentucky, 607 was among the first such area codes to be added to a jurisdiction.