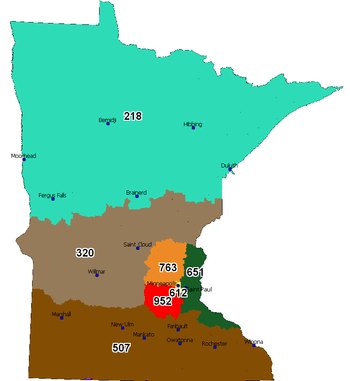 A map of Minnesota area codes. 507 is in dark brown.

Area code 507 is the telephone numbering plan code for the southern fifth of Minnesota, including cities such as Rochester, Mankato, Worthington, Fairmont Albert Lea, and Austin. It was the third area code created for use in the state in 1954, following the original 218 and 612. It was created from the southwestern portion of 218 and the southern portion of 612.

The region was directly bordered by 612 (to the north) until that area code was divided in the 1990s. The western half of 507 bordered area code 320 starting in 1996, and then later came to border also area code 651 (1998) and area code 952 (2000). The northern border of 507 was modified slightly so that expanding communities in and near the Twin Cities would be more closely linked with that region by telephone. 612 has now shrunk down to include just Minneapolis and a few surrounding suburbs, and no longer borders 507.

Cities and communities within