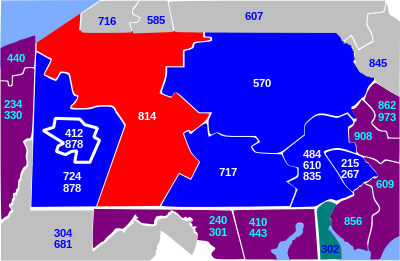 Pennsylvania in blue with Area Code 814 shown in red. This map is clickable; click on a neighboring area code to go to the page for that code.

Area code 814 is a Commonwealth of Pennsylvania, U.S. telephone area code, which serves its northwestern and central regions, including the cities of Altoona, Bradford, DuBois, Erie, Meadville, Oil City, Johnstown, St. Marys, and Warren as well as the boroughs of State College, Brockway, Clearfield, Huntingdon, Bedford, Clarion, Punxsutawney, Tyrone, Ebensburg, Coudersport, and Brookville, as well as other boroughs and townships throughout northwestern and central Pennsylvania.

Map of where area code 582 was supposed to go, showing county lines and what would remain of 814 following a split.

In December 2009, because 814 was getting close to exhaustion, a geographic split was approved, with Erie and most of the northwestern portion slated to switch to the new area code 582. The proposed split—the first in the NANPA area to take place since 2007—would have taken place in early 2012.[1]

Almost immediately after the public utilities commission decision, a grassroots movement began circulating an online petition to request the PA-PUC cancel the split, in favor of an overlay plan.[2] The telecommunications industry also submitted petitions for an overturning of the split and replacing with an 814/582 overlay as well.[3]

On April 26, 2012 the PUC voted 5–0 to dismiss the plans to split the 814 and revoke the implementation schedule. Current estimates suggest that 814 will be exhausted around 2020, by which point the split (or an overlay) of 814 may need to be revisited.[5]

Counties that use this area code

The 814 area code serves parts of twenty-seven counties in Pennsylvania.[6]