Argentina played its first international rugby match in 1910 against a touring British Isles team. As of November 2015 they are ranked 5th in the world by the IRB, making them the highest-ranked nation in the Americas. They have competed at every Rugby World Cup staged since the inaugural tournament of 1987, and the country may be considered the strongest within the Americas in all-time World Cup competition, undefeated against all but Canada, against whom they have suffered three losses.

Although rugby union is nowhere near as popular as football in Argentina, Los Pumas' impressive results since the 1999 World Cup have seen the sport's popularity grow significantly. Argentina has achieved several upset victories, are tough contenders when playing in Buenos Aires, and are fully capable of regularly defeating Six Nations sides. A surprise victory over the hosts France in the first game of the 2007 World Cup took Argentina to fourth in the IRB World Rankings. The team were undefeated in their pool, and reached the semi-finals for the first time, beating Scotland 19–13 in their quarter-final. They were defeated 37–13 by eventual winners South Africa in the semi-finals, but followed this up with a second win over France to claim third place overall.

In March 2008 the team reached an all-time high of third in the IRB World Rankings.

After their advances in competitiveness and performance during the 2000s, coupled with their location in the Southern Hemisphere, Argentina was the only tier 1 nation that had no regular competition, and some, among them former Pumas captain Agustín Pichot,[7] have even spoken of them joining the Six Nations. Argentina officially joined The Rugby Championship in a meeting in Buenos Aires on November 23, 2011.[8] In their first tournament in 2012, Argentina secured a 16–16 draw with The Springboks in only their second game.

The team that played British Lions when they toured on Argentina in 1927.

The History of the Argentina national team starts with the first international played by an Argentine side v. the British Islands in 1910 when they toured on South America. Argentina gained recognition in 1965, when the team toured South Africa playing a series of friendly matches there. In that tour the national team was nicknamed Los Pumas, a name that became an identity mark for Argentina, remaining to present days.

Argentina has taken part in all the Rugby World Cups since the first edition in 1987, being their best performance the 3rd. place achieved in 2007.

Argentina followed their growing competitiveness in the Rugby Championship with a strong showing in the 2015 World Cup, reaching the semi-finals for the second time.

The national side also plays the Rugby Championship since the 2012 edition, after joining the competition one year before.[10] 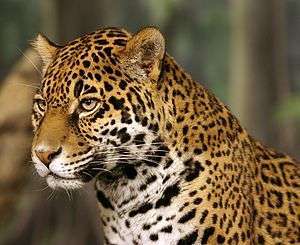 The Jaguar, native of the northeastern Argentina was chosen as the symbol of the team.

Argentina alternated blue and white jerseys during its first international matches in 1910. In 1927 Mr. Abelardo Gutiérrez of Gimnasia y Esgrima de Buenos Aires proposed that Argentina should play against British Lions in a striped white and light blue jersey. That request was accepted and Argentina wore the striped uniform for the first time in its history.[11]

Los Pumas play in a shirt in the country's flag (and sporting) colours of light blue and white, white shorts, and socks in light blue and white. In 2011, the UAR signed a deal with Nike which became the exclusive kit provider for all its national senior and youth teams, including Pampas XV.[12] The first uniform designed by the American company left the traditional horizontal-striped jersey behind, featuring a single light blue with white shoulders jersey, although it was announced that Los Pumas will wear its traditional uniform again when they play the 2012 Rugby Championship.[13]

On September 1941, Abelardo Gutiérrez (who had proposed the use of a white and blue jersey for the team 14 years prior) suggested a badge with the figure of a lion. The color of the crest was blue (due to Buenos Aires Cricket Club, where the first rugby match in Argentine had been played). The animal was later replaced by a native to Argentine species, so the jaguar was chosen due to his "agility and courage", according to their words.[11]

The Pumas nickname is the result of an error made by Carl Kohler, a journalist for the then Die Transvaler newspaper in South Africa, while following the team during their first overseas tour ever – to Southern Africa in 1965. He tried to devise a catchy nickname for the team similar to existing international team nicknames such as All Blacks, Springboks, and Wallabies. He asked Isak van Heerden, the then coach of the Natal Rugby team who was asked by the SARB to assist with the tour, for ideas. They saw a picture of a type of lion with spots on the UAR crest. Kohler was aware that the Americas had jaguars and pumas, and as he was under pressure to submit his article, made a guess and called them the Pumas, instead of the actual jaguar. The mistake stuck, and was eventually adopted by the Argentines themselves (although the UAR crest still depicts a jaguar).[14]

Estadio Ciudad de La Plata has hosted some games v. The All Blacks as part of The Rugby Championship.

The Pumas use a variety of stadiums when playing at home. One of the most frequently used for tests is Estadio José Amalfitani, home of Club Atlético Vélez Sársfield and sited in Buenos Aires. When Great Britain first came to Argentina in the 1910 tour, the national team played at Polo Ground of Flores among other stadiums.[15]

When the British combined returned to Argentina in 1927, the national side started to use GEBA and Buenos Aires Cricket Club as their home venues. GEBA was a frecquent venue during the next decades, but hosted only three matches after the 1960s, as the Pumas started using larger stadiums; the Pumas' last match at GEBA was in 1993.[16] On the other side, the Buenos Aires Cricket was also used for a large number of matches until 1948 when it was destroyed by the fire in 1948.[17][18]

In 1997 BACRC inaugurated the first purpose-built rugby union stadium in Argentina, erected in Los Polvorines, Greater Buenos Aires. A total of nine international games were played there by the national team until 2005 when it was sold.[19]

Los Pumas played in Ferro Carril Oeste stadium during the 1970s and 1980s, where Argentina played Ireland, New Zealand, France and Australia among others.[20][21]

During the mid year tests in 2007, as well as Vélez Sársfield, Argentina played games at venues including Brigadier Estanislao López in Santa Fe, Malvinas Argentinas in Mendoza, and Gigante de Arroyito, in Rosario. Argentina have also used the River Plate Stadium in the past, and in 2006 hosted Wales at Estadio Raúl Conti in Puerto Madryn.

Argentina have won 223 of their 417 Test matches, a win record of 53.61%. When the world rankings were introduced by the IRB in October 2003, Argentina were ranked seventh. They fell to eighth in the rankings in June 2004, before rising back to seventh by November that year. They fell back to eighth in February 2005, and stayed there until falling to their lowest ranking of ninth in February 2006. Since then, Argentina rose to eighth in July 2006, then sixth in November of that year. They had a one-week fall to seventh, then one week later rose to fifth to start the World Cup 2007.

Los Pumas twice surpassed their highest ranking at the 2007 Rugby World Cup.[22] Defeating number three France, the second opening game loss for a World Cup hosting nation, moved them into fourth place, their highest position since the IRB World Rankings were established. They lost to eventual champions South Africa in the semi-final but beat France yet again in the bronze medal round to set another highest ranking, third, behind South Africa and New Zealand.

Argentina has won every match against South American national teams, including 31 against Uruguay, 28 against Chile, 16 against Paraguay and 11 against Brazil. In contrast, they have never beaten New Zealand, having scored a draw against them.

Below is table of the representative rugby matches played by an Argentina national XV at test level up until 26 November 2016.[23]

On 14 November, Juan Pablo Estelles joined the squad in Scotland as injury cover for the backs. Estelles from Northampton Saints becomes the first European based player in 2016 to be selected for the national side.[25]

Note: Flags indicate national union for the club/province as defined by World Rugby.