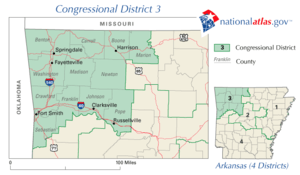 Wal-Mart's corporate headquarters are located in this district in Bentonville. The University of Arkansas is located in Fayetteville. Springdale is the home of Tyson Foods.

As of April 2015, there are three former members of the U.S. House of Representatives from Arkansas's 3rd congressional district that are currently living.