Armen Leonovich Takhtajan or Takhtajian (Armenian: Արմեն Լևոնի Թախտաջյան; Russian: Армен Леонович Тахтаджян; surname also transliterated Takhtadjan, Takhtadzhi︠a︡n or Takhtadzhian, pronounced TAHK-tuh-jahn) (June 10, 1910 – November 13, 2009), was a Soviet-Armenian botanist, one of the most important figures in 20th century plant evolution and systematics and biogeography. His other interests included morphology of flowering plants, paleobotany, and the flora of the Caucasus. He was born in Shusha. He was one of the most influential taxonomists of the latter twentieth century. 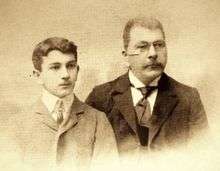 Takhtajan was born in Shusha, Nagorno-Karabakh, Russia on 10 June 1910, to a family of Armenian intellectuals. His grandfather Meliksan Takhtadzhyan Petrovich had been born in Trabzon in Turkey but was educated in Italy, on the island of San Lazzaro degli Armeni, an Armenian enclave and spoke many languages and worked as a journalist. He died in Paris in 1930. His father, Leon Meliksanovich Takhtadzhyan (1884 - 1950), was born in Batumi, Georgia was educated as an agronomist at Leipzig University. Graduating in 1906, he worked on farms in France, Switzerland and the United Kingdom, and made a special study of sheep farming. He became proficient in German, French, English, Russian, Georgian and Azerbaijani. Arriving in Shusha in 1908, then a centre of sheep farming in the Caucasus, looking for work, Leon was forced to teach German at the local Realschule attached to the Armenian seminary, due to lack of opportunities in his chosen field. There he met and married Gazarbekyan Sergeevna Gerseliya (1887 - 1974), Armen Takhtajan's mother, a native of Susha, in 1909.[1][2]

The Takhtajans had three children, Armen (1910–2009), Nellie (1914—1994) and Nora (1918—1965). In 1918 the family were forced to flee to northern Armenia because of the pogroms. Throughout his childhood, Armen showed a keen interest in Narural history, travelling with his father. Armen attended school in Tbilisi in nearby Georgia, initially at Unified Labor School number 42 (former Mantashevskom commercial school). There he came under the influence of one of his teachers, Alexander Konstantinovich Makaev (Makashvili) (1896–1962), who had previously taught agriculture at Tbilisi State University, and had produced a dictionary of botanical names in Georgian, Russian and Latin. Makaev would take Armen on botanical excursions, teaching him to identify plants from Sosnowski and Grossheim's "Determinants of plant life in the vicinity of Tbilisi" (1920). In 1928 he completed secondary school and travelled to Leningrad. There he volunteered at the biology school at Leningrad University and attended lectures by Vladimir Leontyevich Komarov (1869–1945) on plant morphology. In 1929 he began his studies in biology at Yerevan State University in Yerevan, Armenia, which he completed in 1931. He then returned to Tbilisi, enrolling in the All-Union Institute of Subtropical Crops.[1]

In 1932 after completing his course at Tbilisi he worked for a while as a laboratory assistant at Sukhumi, Georgia, at the subtropical branch of the All-Union Institute of Applied Botany and New Crops (now the Institute of Plant Industry), before returning to Yerevan. In Yerevan he took a position as researcher at the Natural History Museum of Armenia, and then at the Herbarium of the Armenian branch of the Institute of Biology, Soviet Academy of Sciences, and began teaching at Yerevan University in 1936, while completing his Master's thesis.[1]

While at the Komarov Botanical Institute in Leningrad in 1940 Takhtajan developed his classification scheme for flowering plants, which emphasized phylogenetic relationships between plants. His system did not become known to botanists in the West until after 1950, and in the late 1950s he began a correspondence and collaboration with the prominent American botanist Arthur Cronquist, whose plant classification scheme was heavily influenced by his collaboration with Takhtajan and other botanists at Komarov.

He is chiefly famous as the author of works on the origins of flowering plants and paleobotanics, developing a new classification system of higher plants. He worked on the "Flora of Armenia" (vol. 1-6, 1954–73) and "Fossil flowering plants of the USSR "(v. 1, 1974) books. Takhtajan also developed a system of floristic regions.(Takhtajan, Crovello and Cronquist, 1986)

For many years restrictions were placed on his work because of his opposition to the official line on genetics promoted by Lysenko.[5] In 1993 he worked for a while at the New York Botanical Garden.[5]

The "Takhtajan system" of flowering plant classification treats flowering plants as a division (phylum), Magnoliophyta, with two classes, Magnoliopsida (dicots) and Liliopsida (monocots). These two classes are subdivided into subclasses, and then superorders, orders, and families. The Takhtajan system is similar to the Cronquist system, but with somewhat greater complexity at the higher levels. He favors smaller orders and families, to allow character and evolutionary relationships to be more easily grasped. The Takhtajan classification system remains influential; it is used, for example, by the Montréal Botanical Garden.

Takhtajan has been considered one of the leading botanists of his time.[5][2]