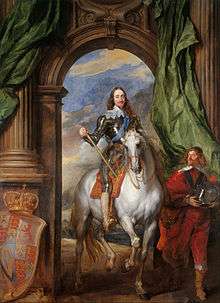 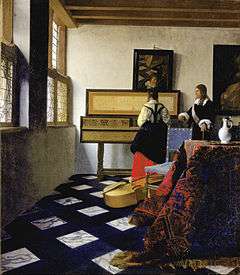 Vermeer Lady at the Virginal with a Gentleman, 'The Music Lesson' 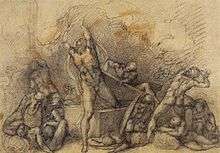 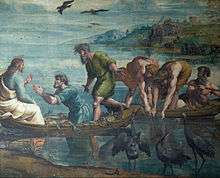 Raphael Cartoons, The Miraculous Draught of Fishes, c. 1515, on loan to the Victoria and Albert Museum since the 19th century 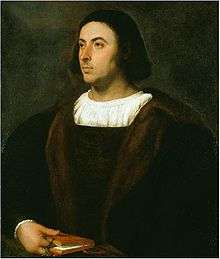 Spread among 13 occupied and historic royal residences in the United Kingdom of Great Britain and Northern Ireland, the collection is owned by Queen Elizabeth II[3] and overseen by the Royal Collection Trust, a branch of the Royal Household. The Queen owns some objects in the collection in right of the Crown and some as a private individual.[4] It is made up of over one million objects,[5] including 7,000 paintings, 30,000 watercolours and drawings, and about 500,000 prints,[5][6] as well as photographs, tapestries, furniture, ceramics, books, sculptures, and the Crown Jewels.

Some of the buildings which house the collection, like Hampton Court Palace, are open to the public and not lived in by the Royal Family, whilst others, like Windsor Castle, are both residences and open to the public. The Queen's Gallery at Buckingham Palace in London was built specially to exhibit pieces from the collection on a rotating basis. There is a similar art gallery next to the Palace of Holyroodhouse in Edinburgh, and a Drawings Gallery at Windsor Castle. The Crown Jewels are on public display in the Jewel House at the Tower of London.

About 3,000 objects are on loan to museums throughout the world, and many others are loaned on a temporary basis to exhibitions.[5] 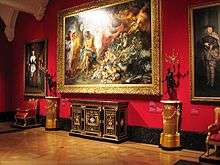 Few items from before King Henry VIII survive. The most important additions to the collection were made by Charles I, a passionate collector of Italian paintings, and a major patron of Van Dyck and other artists. His collection was sold after his execution in 1649, but large numbers of works were recovered for the collection after the Restoration of 1660, when the Dutch Republic also presented Charles II with the Dutch Gift, and Charles later bought many paintings and other works.

George III, with the assistance of Frederick Augusta Barnard, added very large numbers, including tens of thousands of books and manuscripts,[7] and Queen Victoria and her husband Albert were keen collectors of contemporary and old master paintings. Many works have been given from the collection to museums, especially by George III and Victoria and Albert. In particular, most of the then royal library was given by George III to the British Museum, now the British Library, where many books are still catalogued as "Royal". The core of this collection was the purchase by James I of the related collections of Humphrey Llwyd, Lord Lumley, and the Earl of Arundel.[8]

Throughout the reign of Elizabeth II (1952–present), there have been significant additions to the collection through judicious purchases, bequests and through gifts from nation states and other official bodies.[9] The Commonwealth is strongly represented in this manner: an example is the 75 contemporary Canadian watercolours that entered the collection between 1985 and 2001, a gift from the Canadian Society of Painters in Water Colour.

The collection's holdings of Western fine art are amongst the largest and most important assemblages in existence, with works of the highest quality, and in many cases artists whose works can not be fully understood without a study of the holdings contained within the Royal Collection. Numbering over 7,000 works, spread across the Royal Residences, the collection is also arguably amongst the world's oldest in terms of provenance. The collection does not claim to provide a comprehensive, chronological survey of Western fine art but it has been shaped by the individual tastes of kings, queens and their families over the last 500 years.

Numbering over 300 items, the Royal Collection holds one of the greatest and most important collections of French furniture ever assembled. The collection is noted for its encyclopedic range as well as counting the greatest cabinet-makers of the Ancien Régime.

The Royal Collection is privately owned, although some of the works are displayed in areas of palaces and other royal residences open to visitors for the public to enjoy.[12] Some of the collection is owned by the monarch personally, and everything else is described as being held in trust by the monarch in right of the Crown. All works of art acquired by monarchs up to the death of Queen Victoria in 1901 are heirlooms which fall into the latter category. Items the British royal family acquired later, including official gifts,[13] can be added to that part of the collection by a monarch at his or her discretion. Ambiguity surrounds the status of objects that have come into Queen Elizabeth II's possession during her reign.[14] The Royal Collection Trust has confirmed that all pieces left to the Queen by the Queen Mother belong to her personally.[15]

Non-personal items are said to be inalienable as they can only be willed to the monarch's successor. The legal accuracy of this claim has never been substantiated in court.[16] According to Cameron Cobbold, then Lord Chamberlain, speaking in 1971, minor items have occasionally been sold to help raise money for acquisitions, and duplicates of items are given away as presents within the Commonwealth.[14] In a 2000 television interview, the Duke of Edinburgh said that the Queen was "technically, perfectly at liberty to sell them".[17] In 1995, Iain Sproat, then Secretary of State for National Heritage, told the House of Commons that selling objects was "entirely a matter for the Queen".[18]

A registered charity, the Royal Collection Trust was set up in 1993 after the Windsor Castle fire with a mandate to conserve the works and enhance the public's appreciation and understanding of art.[19] It employs around 500 staff and is one of the five departments of the Royal Household.[20] Buildings do not come under its remit. In 2012, the team of curatorial staff numbered 29, and there were 32 conservationists.[21] Income is raised by charging entrance fees to see the collection at various locations and selling books and merchandise to the public. The Trust is financially independent and receives no Government funding or public subsidy.[22]