The Cenotaph is a war memorial on Whitehall in London, England. Its origin is in a temporary structure erected for a peace parade following the end of the First World War and after an outpouring of national sentiment it was replaced in 1920 by a permanent structure and designated the United Kingdom's primary national war memorial.

Designed by Edwin Lutyens, the permanent structure was built from Portland stone between 1919 and 1920 by Holland, Hannen & Cubitts, replacing Lutyens' earlier wood-and-plaster cenotaph in the same location. An annual Service of Remembrance is held at the site on Remembrance Sunday, the closest Sunday to 11 November (Armistice Day) each year. Lutyens' cenotaph design has been reproduced elsewhere in the UK and in other countries including Australia, Canada, New Zealand, Bermuda and Hong Kong. 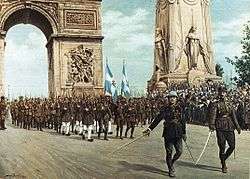 Paris Victory Parade of 14 July 1919 and the temporary catafalque (right) by the Arc de Triomphe (left).

The first cenotaph was a wood-and-plaster structure designed by Sir Edwin Lutyens and erected in 1919.[1] It was one of a number of temporary structures erected for the London Victory Parade (also called the Peace Day Parade) on 19 July 1919. It marked the formal end of the First World War that had taken place with the signing of the Treaty of Versailles on 28 June 1919.[2][3] As one of a series of temporary wooden monuments constructed along the route of the parade, Whitehall's was not proposed until two weeks before the event. Following deliberations by the Peace Celebrations Committee, Lutyens was invited to Downing Street. There, the British Prime Minister, David Lloyd George, proposed that the monument should be a catafalque, like the one intended for the Arc de Triomphe in Paris for the corresponding Victory Parade in France, but Lutyens proposed instead that the design be based on a cenotaph.[4]

The temporary wood-and-plaster structure had the same shape as the later permanent stone structure, and consisted of a pylon that rose in a series of set-backs to the empty tomb (cenotaph) on its summit. The wreaths at each end and on top were made from laurel rather than the later carved stone sculptures. The location chosen along the parade route along Whitehall was between the Foreign Office and Richmond House. The unveiling (described in The Times as 'quiet' and 'unofficial') took place the day before the Victory Parade. During the parade, those saluting the temporary cenotaph included the allied commanders John Pershing, Ferdinand Foch, Douglas Haig and David Beatty. For some time after the parade, the base of the memorial was covered with flowers and wreaths by members of the public. Pressure mounted to retain it, and the British War Cabinet decided on 30 July 1919 that a permanent memorial should replace the wooden version and be designated Britain's official national war memorial.[3] The announcement was made on 23 October 1919 that the Portland stone version would be a "replica exact in every detail in permanent material of present temporary structure".[5]

Lutyens had first heard the term "cenotaph" in connection with Munstead Wood, the house he designed for Gertrude Jekyll in the 1890s. He designed a garden bench seat there, consisting of a large rectangular block of elm set on stone,[6] which acquired the name "Cenotaph of Sigismunda" at the suggestion of their friend Charles Liddell, a librarian at the British Museum.[4]

Whitehall's Cenotaph was constructed from Portland stone between 1919 and 1920 by Holland, Hannen & Cubitts.[2][7] It was undecorated apart from a carved wreath on each end and a smaller carved wreath on top. The words "The Glorious Dead" are inscribed twice, once below the wreaths on each end. Above the wreaths at each end are inscribed the dates of the First World War in Roman numerals (1914 – MCMXIV; and 1919 – MCMXIX). The wreaths at each end are 5 feet (1.5 m) in diameter, while the one on top is 3.6 feet (1.1 m) in diameter.[5]

Its sides are not parallel, but if extended would meet at a point about 300 metres (980 ft) above the ground. Similarly, the "horizontal" surfaces are sections of a sphere whose centre would be 900 feet (270 m) below ground.[8] This element of the design, called entasis, was not present in the temporary structure and was added by Lutyens as a refinement when designing the permanent structure.[4] It is 35 feet (11 m) tall and weighs 120 tonnes (120,000 kg).[5]

The architects waived their fee for designing the cenotaph, meaning that it cost £7,325 to build, a sum equivalent to £255,332 when adjusted by inflation in 2010.[5][9] Construction began on 19 January 1920, and the original flags were sent to the Imperial War Museum.[5] 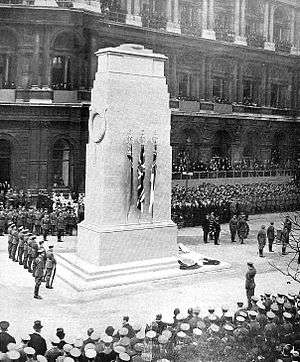 The memorial was unveiled by King George V on 11 November 1920, the second anniversary of the Armistice with Germany which ended the First World War.[2][10] It was decided not to dedicate the memorial, as not all the dead it commemorates are Christian.[5] The unveiling ceremony was part of a larger procession bringing the Unknown Warrior to be laid to rest in his tomb nearby in Westminster Abbey. The funeral procession route passed the Cenotaph, where the waiting King laid a wreath on the Unknown Warrior's gun-carriage before proceeding to unveil the memorial which was draped in large Union Flags.[11] 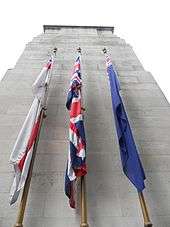 The White Ensign, Union Flag, and Blue Ensign on the Cenotaph.

The Cenotaph is flanked on each side by flags of the United Kingdom which Lutyens had wanted to be carved in stone. Although he was overruled and cloth flags were used, his Rochdale cenotaph (unveiled 26 November 1922) has stone flags. In the years following 1919, the Cenotaph displayed a Union Flag, a White Ensign and a Red Ensign on one side and a Union Flag, a White Ensign, and a Blue Ensign on the other side. On 1 April 1943, an RAF Ensign was substituted for the White Ensign on the west side. The flags displayed as of 2007 represent the Royal Navy, the British Army, the Royal Air Force and the Merchant Navy. The Blue Ensign represents the Royal Naval Reserve, the Royal Fleet Auxiliary, and other government services; it is possible that it was also intended to represent Dominion forces.[5]

Initially the flags were changed for cleaning every six to eight weeks, but between 1922 and 1923 the practice gradually stopped until letters to the media led to its reintroduction. The initial lifespan of a flag was set at five periods of three months. By 1939, they were changed ten times a year, each flag washed twice before being disposed of. By 1924, it was decided that all discarded flags would be sent to the Imperial War Museum who could redistribute them to properly accredited organisations.[5]

Whitehall, along with other areas of London, was the scene of celebrations on 8 May 1945 when victory in Europe was declared in the Second World War. More formal processions past the Cenotaph took place during the London Victory Celebrations on 8 June 1946. The Cenotaph had been designed to commemorate the British Empire military dead of the First World War, but this was later extended to include those that died in the Second World War. The dates of the Second World War were added in Roman numerals on the sides of the memorial (1939—MCMXXXIX; and 1945—MCMXLV), and the memorial was unveiled for a second time on Sunday 10 November 1946 by King George VI. The memorial is now also used to remember the dead of later wars in which British servicemen and servicewomen have fought. The Cenotaph was designated a Grade I listed building on 5 February 1970.[12] 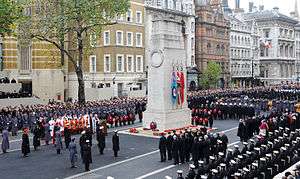 Wreaths being laid at the Cenotaph during the Remembrance Sunday service in 2010.

Although the Armistice Day ceremony fell away during the Second World War, in recent years the tradition of holding a ceremony at the Cenotaph at 11am on 11 November has been reinstated by The Western Front Association, a UK-based charity dedicated to perpetuating the memory of those who served in the First World War.[14]

The first such modern ceremony was held on 11 November 1919, following a suggestion by King George V for a two-minute silence across the United Kingdom and a ceremony to take place in London. Thousands had gathered around the wood-and-plaster Cenotaph in Whitehall, where Prime Minister David Lloyd George walked from Downing Street to place a wreath. A wreath was also laid by a representative of the French President, and soldiers and sailors provided a guard of honour. There were also processions past the Cenotaph organised by veterans' associations.[15]

Annual remembrance services also take place at the Cenotaph on other days of the year. These include the regimental parade held by the Royal Tank Regiment on the Sunday following Remembrance Sunday. This is the closest to Cambrai Day (20 November), the anniversary of the Battle of Cambrai that was one of the earliest deployments of British tanks.[16][17] An annual parade and service is also held by the Combined Irish Regiments Association to commemorate the war dead of the Irish regiments that were disbanded on 12 June 1922 after the First World War.[18] This parade is now held on the Sunday in June that follows the Queen's Birthday Parade.[19] The Belgian Parade at the Cenotaph has taken place yearly since 1934 on the Sunday preceding the Belgian National Day (21 July). Belgium is the only nation that is allowed to parade its troops in uniform and carrying arms in central London.[20]

Other annual remembrances held at the Cenotaph at various points in the year include those marking the D-Day landings in Normandy in the Second World War, the Falklands War (and the Battle of the Falklands in 1914), the campaigns marked by Anzac Day, and services marking the first day of the Somme Offensive. 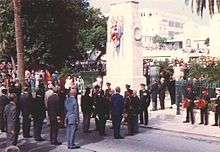 Remembrance Day parade, at the Cenotaph in the City of Hamilton, Bermuda, 1990.

Other cenotaph designs by Lutyens in the UK