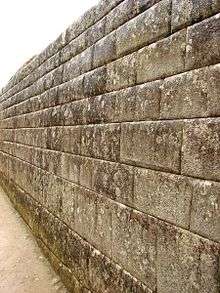 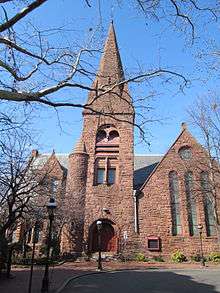 Architect Henry Hobson Richardson specified quarry-faced red Longmeadow sandstone in random ashlar for the North Congregational Church (Springfield, Massachusetts, 1871). Although each ashlar block was cut with great precision on the faces adjacent to each other, the external face was left rough as when removed from the quarry. The blocks were carefully laid without continuous courses or joints both vertically and horizontally, giving a random appearance. 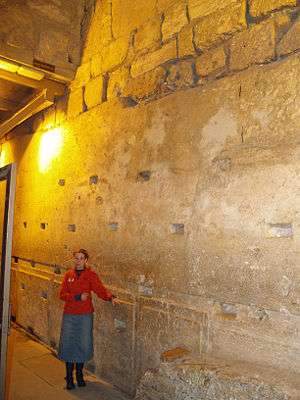 The enormous Western Stone ashlar in the Western Wall of the Temple Mount, Jerusalem.

Ashlar is finely dressed (cut, worked) masonry, either an individual stone that has been worked until squared or the masonry built of such stone. It is the finest stone masonry unit, generally cuboid, mentioned by Vitruvius as opus isodomum, or less frequently trapezoidal. Precisely cut “on all faces adjacent to those of other stones”, ashlar is capable of very thin joints between blocks, and the visible face of the stone may be quarry-faced or feature a variety of treatments: tooled, smoothly polished or rendered with another material for decorative effect.[1][2]

One such decorative treatment consists of small grooves achieved by the application of a metal comb. Generally used only on softer stone ashlar, this decoration is known as mason's drag.[3]

Ashlar is in contrast to rubble masonry, which employs irregularly shaped stones, although sometimes minimally worked or selected for similar size, or both. Ashlar is related but distinct from other stone masonry that is finely dressed but not quadrilateral, such as curvilinear masonry and polygonal masonry.[2][4]

Ashlar may be coursed, which involves lengthy horizontal courses of stone blocks laid in parallel, and therefore with continuous horizontal joints. Ashlar may also be random, which involves stone blocks laid with deliberately discontinuous courses and therefore discontinuous joints both vertically and horizontally. In either case, it generally uses a joining material such as mortar to bind the blocks together, although dry ashlar construction, metal ties, and other methods of assembly have been used. The dry ashlar of Inca architecture in Cusco and Machu Picchu is particularly fine and famous.

The word is attested in Middle English and derives from Old French aisselier, from Latin axilla, diminutive of axis, "plank."

Ashlar blocks have been used in the construction of many buildings as an alternative to brick or other materials.

The term is frequently used to describe the dressed stone work of prehistoric Greece and Crete, although the dressed blocks are usually much larger than modern ashlar. For example, the tholos tombs of Bronze Age Mycenae use ashlar masonry in the construction of the so-called "beehive" dome. This dome consists of finely cut ashlar blocks that decrease in size and terminate in a central capstone.[5] These domes are not true domes, but are constructed using the corbel arch.

Ashlar masonry was also heavily used in the construction of palace facades on Crete, including Knossos and Phaistos. These constructions date to the MM III-LM Ib period, ca. 1700–1450 BC.

In modern European masonry the blocks are generally about 35 centimetres (14 in) in height. When shorter than 30 centimetres (12 in), they are usually called small ashlar.

In some Masonic groupings, which such societies term jurisdictions, ashlars are used as a symbolic metaphor for how one's personal development relates to the tenets of their lodge. As described in the explanation of the First Degree Tracing Board, in Emulation and other Masonic rituals the rough ashlar is a stone as taken directly from the quarry, and allegorically represents the Freemason prior to his initiation; a smooth ashlar (or "perfect ashlar") is a stone that has been smoothed and dressed by the experienced stonemason, and allegorically represents the Freemason who, through education and diligence, has learned the lessons of Freemasonry and who lives an upstanding life.[6]