Not to be confused with Asteroid. 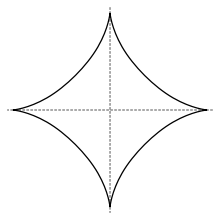 The hypocycloid construction of the astroid.

Its modern name comes from the Greek word for "star". The curve had a variety of names, including tetracuspid (still used), cubocycloid, and paracycle. It is nearly identical in form to the evolute of an ellipse.

This implies that an astroid is also a superellipse.

The pedal equation with respect to the origin is

the Whewell equation is

and the Cesàro equation is

The polar equation is[3]

The astroid is a real locus of a plane algebraic curve of genus zero. It has the equation

The astroid is therefore a real algebraic curve of degree six.

Volume of the surface of revolution of the enclose area about the x-axis.

Area of surface of revolution about the x-axis